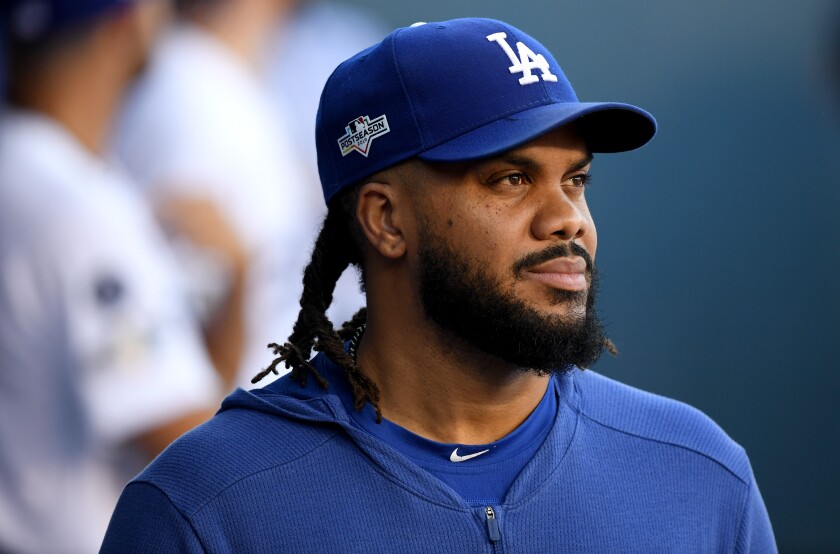 Throughout the 2019 season, Dodgers manager Dave Roberts reiterated, ad nauseam, that he believed in closer Kenley Jansen. Even when he disclosed he might not use Jansen in a save situation before Game 2 of the National League Division Series, Roberts maintained he trusted Jansen to secure outs late in close games. It was clear Jansen had taken a step back over the last two seasons, but Roberts insisted it did not matter.

“This is the best mind frame he’s been in,” Roberts said. “And that speaks to his openness to pitch whenever there are important outs to be had. So he understands that. It’s very telling. There’s no demotion. And I don’t know how it’s going to play out. He’s our closer, but that doesn’t mean that there aren’t important outs in the eighth inning that we need to get.”

But by the end of the series, after a season-ending Game 5 loss to the Washington Nationals, it was obvious Roberts’ faith — if not the entire Dodgers’ brass — had wavered. Jansen watched from the bullpen, warmed up and ready to go, as Joe Kelly gave up the season-ending grand slam to Howie Kendrick in the 10th inning.

Rather than give the ball to Jansen to escape the jam — or pitch from the beginning of the inning — Roberts decided to keep Kelly in the game for a second inning. Kelly had not logged more than an inning in an outing since late August and was limited in September with an injury the Dodgers refused to reveal. On Monday, Friedman said Kelly’s ailment started with knee and quad trouble before he dealt with arm soreness. He insisted Kelly didn’t suffer from structural damage.

Jansen entered following the gut-wrenching fallout. He jogged to the mound to “California Love” to mop up in front of a stunned crowd for his second appearance of the series. The season was over.

“My role is always, in playoffs, doesn’t matter if it’s a save situation, sometimes you go earlier, like the game [Clayton Kershaw] saved,” Jansen said after retiring the two batters he faced. “Anything can happen and you have to be ready for it. Be ready when your name is called. I’m locked in, no matter the situation. Sometimes you pitch the seventh, eighth, ninth.”

What about next season? On Monday, president of baseball operations Andrew Friedman did not give a resounding endorsement for Jansen remaining the team’s closer.

“I’m not sure,” Friedman said. “I haven’t gotten into the exact specifics of offseason planning. Just more kind of broad strokes. My sense sitting here is that Kenley will be our closer. We’ll see how things play out.”

Whether or not he closes, Jansen will cash checks like an elite reliever. The right-hander has $38 million remaining on the final two years of his contract. He could opt out of the deal this offseason, but that would be financial malpractice; the market wouldn’t be a kind place for a 32-year-old reliever coming off the two worst years of his career.

The Dodgers can take solace in the times Jansen discovered his previous form. He was dominant for stints. Both he and team officials stated his success derived from syncing up his 6-foot-5 frame to orchestrate consistent mechanics. The problem was he failed to bottle the formula with regularity. The outcome was a 3.71 earned-run average and eight blown saves in 62 appearances.

“He’s another guy, as far as making a bet, in terms of people doing everything they can to put themselves in that position to have success, I will absolutely bet on him,” Friedman said. “And when you have that and some awareness that we learned during that season, that it is hard to make those adjustments on the fly, I’m excited of what he’s capable of next year and feel like he’ll be a big part of us winning games. Exactly what that role is, I don’t know right now.”

The other guy Friedman was referring to is Kershaw, whose three-pitch collapse propelled the Dodgers’ stunning Game 5 loss. While Friedman claimed the Dodgers featured the deepest playoff bullpen he’s assembled since joining the organization, he also defended Roberts’ decision to have Kershaw face Anthony Rendon and Juan Soto in the eighth inning after he struck out Adam Eaton on three pitches to escape trouble in the seventh.

Having Kershaw available to pitch out of the bullpen in Game 5 was a reason he started Game 2 over Hyun-Jin Ryu. He was a relief option. Ryu wasn’t. But that did not mean Kershaw — who allowed a career-high 28 home runs and regularly encountered trouble early in starts this season — was the only option to navigate the most dangerous portion of the Nationals’ lineup. Friedman said he could see both sides to the argument.

But Friedman declined to even discuss Roberts’ decision-making in the 10th inning when Kelly served up the fastball that ended the Dodgers’ season. Jansen observed the collapse from the bullpen. His manager said he trusted him in those situations. He just didn’t manage like he did. Whether Jansen will be trusted in those spots next season remains to be seen.