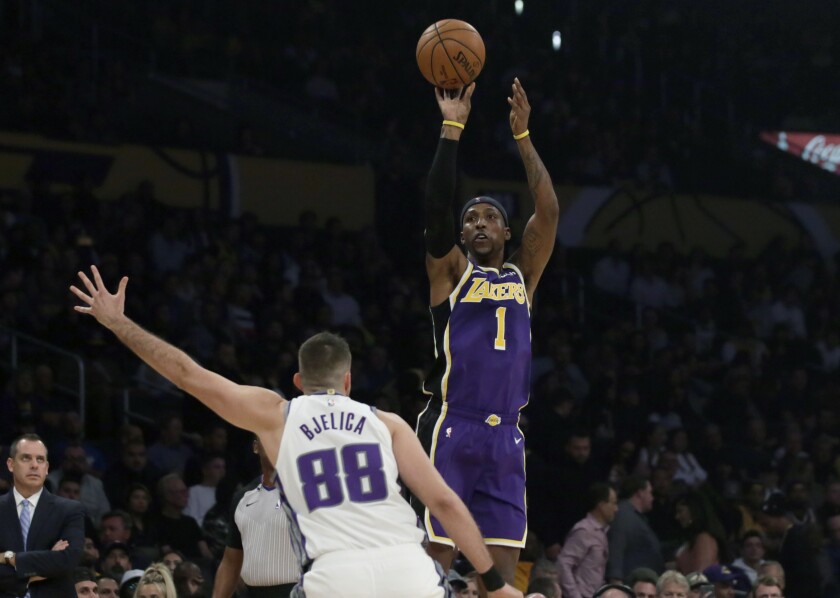 Kentavious Caldwell-Pope’s first shot was deflected. His running layup didn’t even graze the rim. When the Lakers guard missed another layup in transition during the third quarter, fans let out an all-too-familiar sigh.

These were the same fans that booed Caldwell-Pope on his own home court earlier this season. He tried not to listen.

“If I have a good game,” Caldwell-Pope said, “they’re going to be the same fans that’s cheering me.”

Indeed, fans cheered loudly for the seventh-year guard from Georgia on Friday night after his clutch fourth-quarter shooting helped the Lakers (10-2) fend off the Sacramento Kings for a 99-97 win at Staples Center. Caldwell-Pope scored 12 of his season-high 16 points in the fourth quarter while making five of six shots. He scored nine of the Lakers’ final 15 points after the Kings (4-7) erased an eight-point, fourth-quarter deficit.

It was Caldwell-Pope’s first double-digit scoring night in six games. Now in his third season with the Lakers, Caldwell-Pope is scoring just 6.2 points per game, a number that received a generous bump after Friday’s performance. It’s his lowest scoring average since his rookie season in Detroit.

Frank Vogel acknowledged Caldwell-Pope’s offensive struggles this season, saying his “scoring has been up and down,” but the Lakers’ first-year coach bristled at the thought that Caldwell-Pope has had an inconsistent season in general.

“With the style of play that this league plays with nowadays, you need as many perimeter defenders that you can trust and can get out and guard and have speed and containment ability as you can, and he’s one of those soldiers for us,” Vogel said. “I know he gets a lot of criticism for his offense, but he’s capable of knocking down big shots like we saw tonight, and he brings consistent energy on the defensive end.”

With guard Avery Bradley sidelined because of a hairline fracture in his right leg, Caldwell-Pope made his second start this season. He was yanked less than four minutes into the game in favor of Alex Caruso, who Vogel thought could give the Lakers an additional ball-handler as the Kings pressured LeBron James full court with Cory Joseph.

Caldwell-Pope missed both of his shots before the early exit. The Kings opened the second quarter with a defensive three-seconds call and Caldwell-Pope took the technical free throw. He needed to see the ball go through the net.

“Then after that I was feeling good in a good rhythm,” he said.

To keep his confidence through the recent slump, Caldwell-Pope credited “praying a lot.” His teammates tried to help.

“We all just told him, ‘Listen, we don’t care if you make shots,’” said James, who had 29 points and 11 assists in the win Friday. “‘We just want you to take them with confidence.’”

When social media criticism came, teammates stepped in. Dwight Howard jumped to defend Caldwell-Pope on Instagram earlier this week when a fan wrote the Lakers should trade the guard.

“Let’s uplift each other,” Howard responded.

The center added a final word in the wee hours of Saturday morning.

“Keep flying @caldwellpope,” Howard wrote in an Instagram caption with an image of his teammate leaping into the air for a scoop layup. “We all believe in you.”

Keep flying @caldwellpope We all believe in you. Great game my g.

Update: This is the last stop of a five-game trip for the Hawks that began last Sunday in Portland and included a game Saturday night against the Clippers. Second-year guard Trae Young is providing Atlanta (4-7) with stellar play by averaging 27.3 points, 9.1 assists and 38.6% three-point shooting per game.