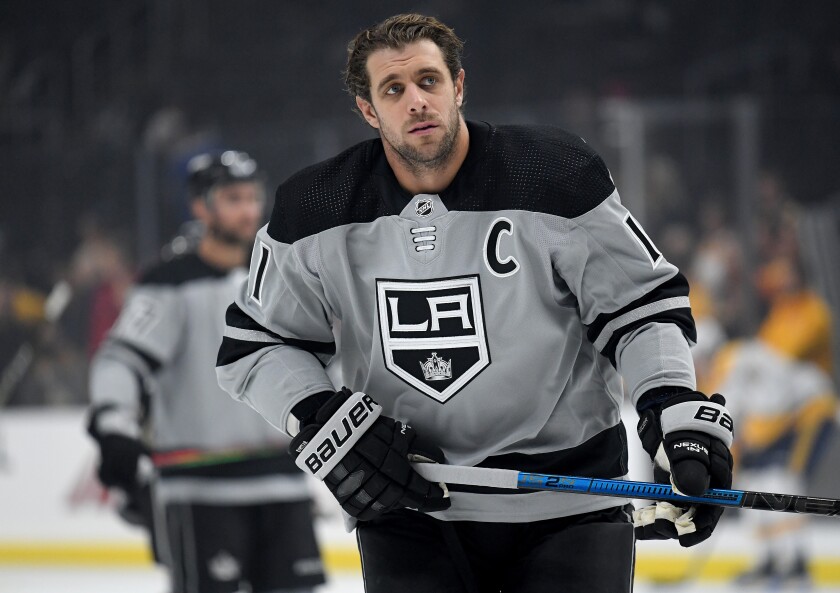 Anze Kopitar was largely unexpressive as he sat at his locker Monday morning.

Surrounded by reporters, the Kings captain ran his fingers through his hair, fiddled with pads, and wiped drops of sweat from his brow while answering questions about another season this team has struggled to get off the ground.

It wasn’t until he was asked about his latest milestone moment that Kopitar’s stoic stare gave way to a humble smile. For the fifth time in his career, the 32-year-old center has been selected for the NHL All-Star Game.

Kopitar will join Ducks forward Jakob Silfverberg as the two representatives from the league’s Southland franchises to take part in this year’s All-Star festivities, which will be held from Jan. 24-26 in St. Louis. Kings defenseman Drew Doughty and Ducks captain Ryan Getzlaf also remain in All-Star contention as “Last Men In” candidates for the Pacific Division team.

Kopitar is the Kings’ leader in goals (15), points (35) and faceoff win percentage (56.6% ). For a Kings team in the process of getting younger, he has stayed steady with age. He is currently on pace for his fourth 30-goal season and is among the NHL’s leaders in shooting percentage (18.5%).

“Great choice, very deserving,” Kings coach Todd McLellan said. “When your captain can be selected, that’s a great sign. It means he’s doing things right. He’s leading a group of players the right way. For me, it’s been impressive being around him.”

Kopitar said the 2018 game was his favorite past trip because “we won,” he said with a laugh, having been part of the Pacific Division team that captured the four-team, three-on-three event.

“And I was there with Drew,” he added. “That made it fun. You know other guys, but you have a teammate there. That was cool.”

Kopitar will return for the first time since under much different circumstances. In 2018, the Kings were headed toward their seventh playoff appearance in nine years. This season, they are trying to avoid a second-straight last-place finish in the Western Conference.

But even in his 14th season, with the Kings in the process of cycling a new generation of players into their franchise, Kopitar is providing a template for others to follow.

“Obviously, the scoring, the hands, the ability to create,” McLellan said of Kopitar’s best attributes. “But the commitment without the puck is contagious. When he does it right, everybody seems to follow. He never complains about doing it. I never hear any whining or bitching about having to defend or play on the other side or starting a faceoff in the D-zone. He just plays. When it’s his turn, he does it the right way most of the time.”

Doughty is the Kings’ scoring leader among defensemen with six goals and 25 points. Though his minus-10 rating is tied for the team’s worst mark, his average ice time of 25 minutes, 59 seconds is second in the league.

The “Last Men In” candidates will be decided by a week-long fan vote starting Wednesday.