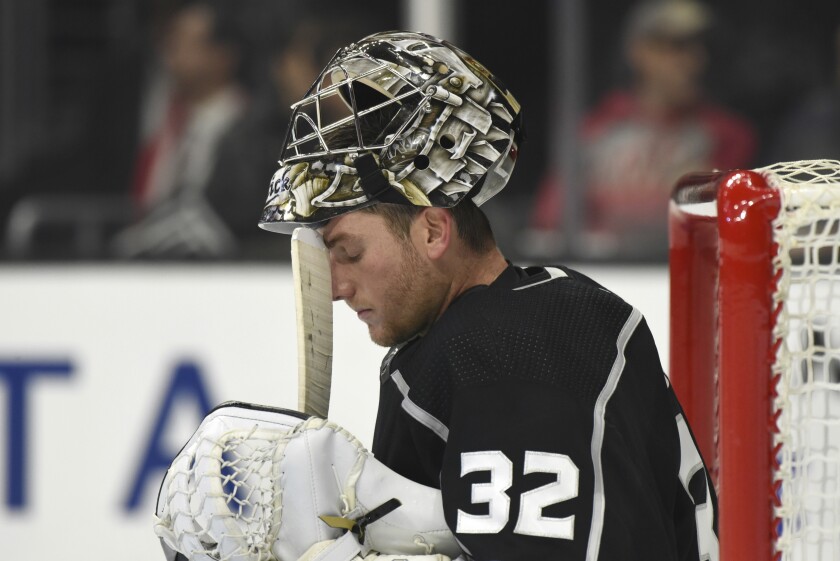 Kings’ Jonathan Quick is struggling again this season, but his new coach has faith in him

Todd McLellan has seen Jonathan Quick at his very best.

McLellan’s first season as the coach of the San Jose Sharks in 2008-09 was Quick’s first full year in the NHL. Over the decade since, McLellan has coached against the Kings’ dominant netminder every year in the Pacific Division. They’ve crossed paths in the playoffs three times, including when the Kings mounted a historic comeback from a 3-0 series hole in 2014.

So, when McLellan was asked whether it’s still fair to judge the 33-year-old netminder — who has lost all three of his starts this season with a 6.43 goals-against average and .793 save percentage — against the lofty expectations his stellar career has created, the veteran coach was speaking from years of perspective.

“He’s still that good, in my opinion,” McLellan said following the Kings’ 5-2 loss to the Vegas Golden Knights on Sunday, in which Quick stopped 31 of 36 shots.

Much like the Kings themselves, Quick appears to be in a purgatorial transition phase, stuck somewhere between the prime and postmortem of his career. During his 13 NHL seasons, the two-time Jennings Trophy recipient (awarded to the goalie of the team that has the fewest goals scored against it) has earned a 2.38 GAA, .913 save percentage, and reputation as one of the league’s stingiest shot-stoppers.

He’s raised the bar sky-high. Which makes his recent slip, which began with an inconsistent and injury-riddled campaign last year and has continued with a trying trio of games this season, all the more stark — even if not all of the 19 goals he has allowed have been wholly his fault.

Quick’s statistical decline came seemingly out of nowhere. The last two times he’s stayed healthy throughout a season, he led the Kings to the playoffs. Before last year — a career-worst season that saw him go on injury reserved with a lower-body injury after the first game, struggle to find a rhythm after returning, and post a 3.38 GAA and .888 save percentage — he had never had a GAA worse than 2.54 or save percentage below .902.

Though it was difficult to discern how much of his 2018-19 slide was down to his own poor play or his team’s tumultuous form, some level of regression was clear. His backups, Jack Campbell and Cal Petersen, began to be tagged as the club’s goalies of the future. Even though Quick’s $5.8 million-per-year contract doesn’t expire until 2023-24, some factions of the fan base were ready for the franchise to move on.

His early-season numbers this year have created more questions.

Few bounces have gone Quick’s way. Two of the 19 goals deflected off a teammate and into the net. Six others, including three on Sunday, came with the Kings on the penalty kill. The defensive corps in front of him is missing veterans Derek Forbort and Paul LaDue. Two of Quick’s starts, against the Vancouver Canucks on Wednesday and Sunday’s defeat to the Golden Knights, have been arguably his team’s worst two games overall.

“[Goalie is] a defenseless position, really, when they’re looking at some of these shooters in the league,” McLellan said. “We’ve got to be better around them.”

But unlike years past, Quick has done little to bail the Kings out. On Sunday, he surrendered a pair of top-corner shots from the high slot for his second consecutive start, digging the Kings into an early 2-0 hole from which they wouldn’t recover.

He improved as the game went on, including a 21-save second period highlighted by a sprawling glove denial of Jonathan Marchessault near the post. Afterward, McLellan called it Quick’s best performance of the season.

“He made some outstanding saves when we needed them,” McLellan said, while also acknowledging: “Are there a couple, or one, that maybe he’d like to have back? I’m sure he would.”

Quick didn’t indulge much postgame discussion about his play, saying only that he feels he is seeing the puck OK, that he felt good about his game coming into the season, and that Sunday’s performance, despite apparent improvement from his first two outings, was still “a loss, so it’s the same as the last two.”

He also noted that three games is a tiny sample size. Making any definitive judgments, especially at his position, would be premature.

But in the bigger picture, almost all of his indicators are still pointing down. And as long as that is the case, the question will remain:

Is this just a temporary blip for Quick, a brief departure from his normal, dominant self? Or is this what Quick’s new baseline has become, slowly turning the once-elite goalie into a shadow of the stalwart he used to be?