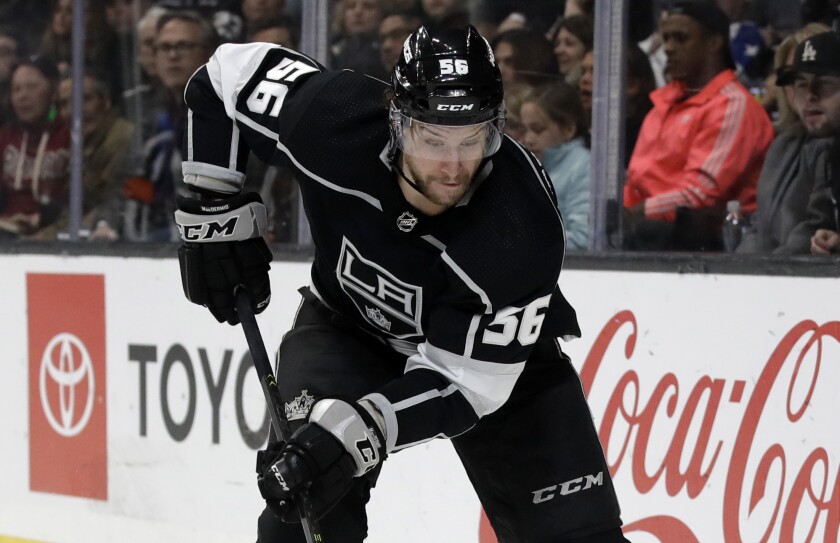 Kings defenseman Kurtis MacDermid has been suspended two games for an illegal check to the head, the NHL’s Department of Player Safety announced Friday.

MacDermid‘s punishment stems from an incident in the team’s 5-3 win over the Philadelphia Flyers on Wednesday. During the second period that night, MacDermid tried to check Flyers defenseman Ivan Provorov in the neutral zone, but his hit caught Provorov in the head.

“The play was set up for that type of hit, with the way Provorov was directed into that ice,” Kings coach Todd McLellan said Thursday. “That ice [in the neutral zone] is important to us as a team. He tried to lower himself. He tried to keep it clean.”

MacDermid, 6-foot-5 and 233 pounds, stepped up in front of the Kings’ blue line as Provorov, 6-foot-1 and 201 pounds, approached the offensive zone. The Flyers player appeared to crouch as MacDermid delivered contact, which knocked Provorov to the ice and sent MacDermid flying into the bench.

MacDermid wasn’t penalized during the game. But in a video released Friday, the league ruled that MacDermid’s check was “a forceful check that makes the head the main point of contact when such contact was avoidable.”

McLellan said he didn’t believe MacDermid had any malicious intent on the play, which ended with the defenseman getting pushed back onto the ice by a Flyers player.

“I’d like to believe there aren’t any players in the league anymore that go head-hunting,” McLellan said, noting a similar incident in Wednesday’s outdoor Winter Classic game between the Dallas Stars and Nashville Predators in which Stars forward Corey Perry was ejected in the first period after hitting a Predators player in the head with his elbow.

“I don’t think Corey Perry had any intent, and I think he felt really bad immediately,” McLellan said of the former Duck. “I may be completely wrong, but that’s what I believe. I don’t think Dermy was doing anything like that. Sometimes plays just adjust as they happen.”

MacDermid will be eligible to return Wednesday, when the Kings close a four-game home stand against the Dallas Stars. The 25-year-old defenseman has been frequently moved in and out of the lineup this season. In 26 games, he has two goals, two assists and a zero plus/minus rating.