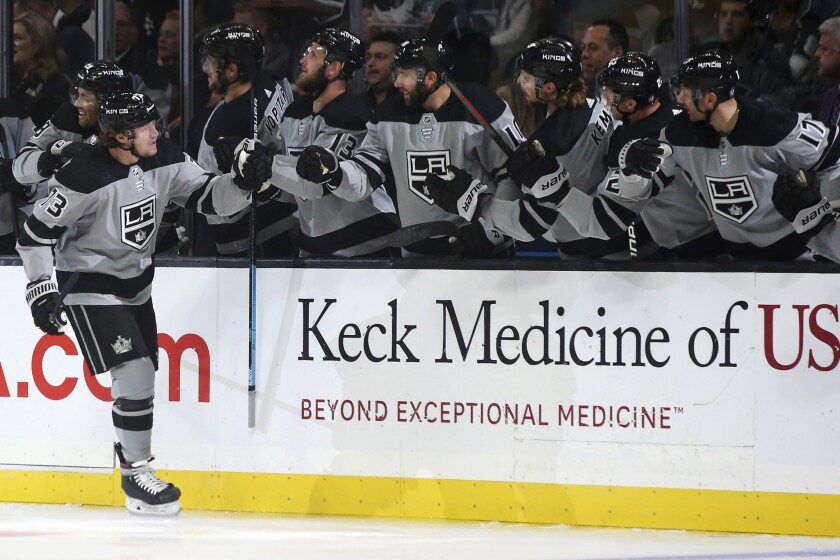 Tyler Toffoli pumped his fist and flashed a grin, gliding toward the boards for a long-awaited goal-scoring embrace with his new linemates. Finally, they had something to celebrate.

Five games since being put together on the Kings’ second line, Toffoli, Jeff Carter and Blake Lizotte entered Saturday’s game embodying the frustrations of the Kings’ embattled offense. A positionally sound, shot-producing, defensively responsible trio, they’d become one of coach Todd McLellan’s most dependable units. What they had to do, however, was score goals.

Saturday’s 4-1 win over the Calgary Flames saw them break through at long last.

Toffoli delivered on their first shift. The winger took a pass from Lizotte just inside the Flames’ blue line. As Lizotte drove to the net, attracting attention from the Flames’ defensemen, Toffoli was patient. He stickhandled near the boards while Lizotte created space in the slot. Then, with Carter also occupying a defender near the opposite boards, Toffoli toe-dragged the puck to the middle of the ice and snapped it into the top corner of the net.

It was a dazzling individual effort but also an example of the subtle chemistry the Kings’ second line has already begun to build.

“They know where each other is going to be,” McLellan said of the line, which has a plus-10 even-strength shot differential and has allowed only one goal since being created at the start of the Kings’ five-game homestand last week. “They read off each other well.”

To some extent, it’s a surprising development. On paper, there might not be a more mismatched triumvirate on the Kings’ roster.

Carter, 34, is in the twilight of his career, closing in on the 1,000-career-games mark in his 15th NHL season. Yet, the former center is playing a new position this season, pushed to the wing in a move that created more roster room for the Kings’ young crop of new centermen.

“Sometimes that’s energizing,” McLellan said of Carter’s position change. “You’ve got to think a little bit more of where you’re going and what you’re doing. So, things are good for him.”

Indeed, coming off a career-worst 2018-19 season that saw him record lows in points-per-game and plus/minus rating, Carter’s play has picked up in the season’s opening weeks. He ranks in the top 10 in the NHL in expected goals, and finally netted an actual tally Saturday too.

His drought-snapping score wasn’t pretty — a backhanded centering pass that banked off the skates of a Flames defender and into the goal — but it didn’t need to be.

“He’s been snakebit,” McLellan said. “Numerous chances. Worked really hard for [the] opportunity. Finally got rewarded for it.”

Toffoli is in a different boat. The 27-year-old winger is in the final year of his contract. He has repeatedly insisted he isn’t thinking past this season, but his future is nonetheless hanging in the balance.

“There’s a lot of people doubting me, and doubting us as a team,” Toffoli said in the preseason. “Everyone should be excited to prove a point.”

Given his impending free-agent status, the seventh-year pro could be trade bait if the rebuilding Kings decide to sell near the trade deadline. But for now, his stock seems to be on the rise. His three goals are tied for most on the team, and his 24 shots are third. His goal Saturday showcased his skill with the puck too, handing the Kings their first goal in three games.

“Really nice play by Toff, a great shot,” McLellan said. “You could kind of feel a little bit of relief on the bench.”

Then there’s Lizotte, the undersized and undrafted free agent from St. Cloud State who signed with the Kings near the end of last season and has been among the most pleasant surprises on the team thus far. Unlike Toffoli and Carter, who have played together in the past, Lizotte had to get up to speed this preseason, learning how to play both within McLellan’s system and alongside vastly more-experienced teammates.

Though Lizotte is still waiting on his first NHL goal, he has proved disruptive up the middle of the ice.

“He’s drawing penalties, he’s creating turnovers,” McLellan said. “Might not be on the scoresheet every night, but he has an impact on the game positively, and he gets rewarded for ice time.”

Together, they’ve become a valuable asset to the Kings’ forward group. After the top line of Alex Iafallo, Anze Kopitar and Dustin Brown, the Toffoli-Lizotte-Carter trio has looked like a legitimate No. 2 option. Though McLellan continues to tinker with his bottom two lines, he suddenly has a top six he feels he can count on.