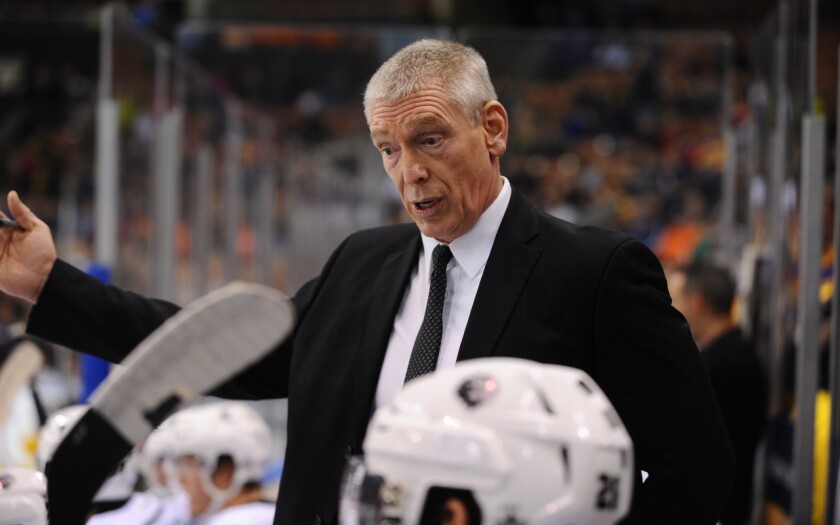 Kings minor league coach Mike Stothers didn’t get to see much of the club’s prospect development camp in June. Instead, he was tucked away in a video room, huddled around the organization’s other NHL and American Hockey League coaches.

Two months earlier, the Kings hired coach Todd McLellan to reshape the franchise. He was given a five-year contract and free reign to implement his systems. Just like the team’s veteran players, Stothers had to learn what McLellan wanted to do.

“We basically try to design our game plan around what they’re doing,” said Stothers, the silver-haired Ontario Reign coach now in his sixth season at the helm of the Kings’ AHL affiliate. “We do try to keep it as close as possible to whatever Kings head coach is in there. We’re trying to follow their system.”

This season has been a stark change. Stothers spent five seasons running the familiar heavy-checking, defense-minded style employed by former Kings coaches Darryl Sutter and John Stevens. McLellan arrived with a new neutral zone forecheck (a 1-3-1 instead of the Kings’ previous 1-2-2), new terminology (a phrase such as “skating interference,” for instance, is now known as a “down screen”), a new special-teams system, and a new ethos: Play faster and more aggressive.

“It was like going to school,” said Stothers, who has tried to mimic those lessons with a Reign roster that includes some of the Kings’ top prospects, such as Gabe Vilardi, Jaret Anderson-Dolan and Tobias Bjornfot.

“We took a lot of notes. We watched video and took notes from the video. We took notes from what Todd was saying, or [assistant coaches Trent Yawney and Marco Sturm]. We didn’t end up watching much of the development camp with the kids they brought in. We were over in the war room on the Kings’ side, just going through the system Todd was wanting to implement.”

Said McLellan: “Every minute we spent together, [the Reign] staff was with us.”

Even as both teams are suffering growing pains (the Kings are 18-27-5 and last in the Western Conference; the Reign are 18-18-5), the Reign and Kings have cultivated a symbiotic NHL-AHL relationship.

For example, after sitting out the first three months of the season because of a back injury, defenseman Derek Forbort was able to get acclimated to McLellan’s system during conditioning stints with the Reign. The same goes for rookie call-ups such as Matt Luff, who has found the jump to the NHL “an easy transition. You don’t have to think [about the systems]. That’s a big thing.”

Known as a players coach — he carries a “Hakuna Matata” mug around the Reign’s arena — Stothers understood the challenges such changes created, especially for players who have been around the organization for years.

“It’s hard when you’re conditioned to do it certain ways, to retrain your brain to think about, ‘That’s how it used to be. Now we’re doing this,’” he said.

But Stothers sees the potential long-term benefits too. Once the Kings decided they required a total reset, it was up to the coaches to groom the franchise’s next generation of players in the organization’s mold.

“Whether it’s Todd to his guys or our coaching staff to our guys here, you want them to believe in it,” Stothers said of the new system. “You want them to trust it. You want them to know why they’re doing it, and the results they’re going to have from it.”