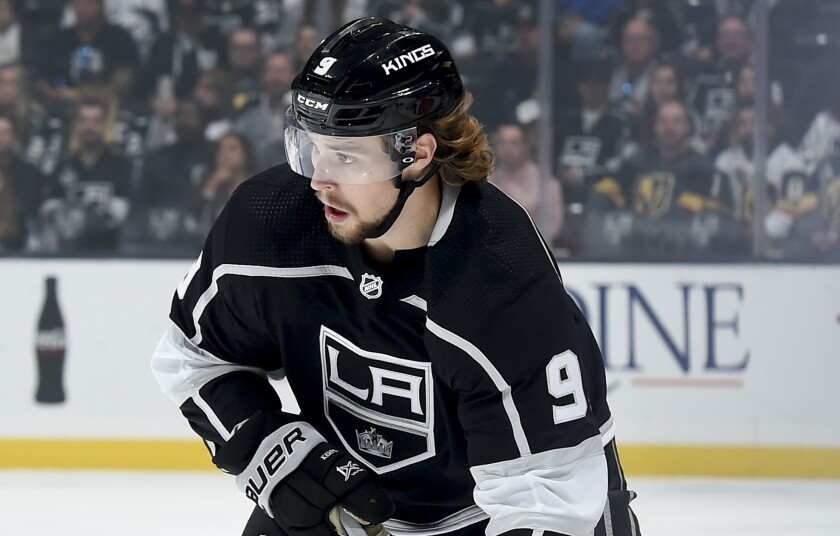 Kings coach on Adrian Kempe: ‘He’s got to be way more productive than he’s been’

Had it not been for a Kings’ power-play with less than six minutes to go, Adrian Kempe’s third-period absence Tuesday night might have gone unnoticed.

Earlier in the frame, the Kings’ center took a puck to the face that required stitches. He was stuck in the trainer’s room for most of the final 20 minutes, forcing teammate Blake Lizotte to fill his role on the man-advantage.

But based on Kempe’s usage up to that point in the Kings’ 2-0 loss to the Carolina Hurricanes, he might not have missed much. Amid his slow start to the season, which has seen his even-strength ice-time slashed and his spot in the lineup diminished from the second to the fourth line, coach Todd McLellan indicated Kempe would have likely been relegated to the bench for most of the third period anyway.

As the Kings try to rebuild their roster and restore their culture, the talented 23-year-old is becoming a dubious case study for McLellan’s playing-time philosophy: How will the new coach handle players who aren’t earning their shifts? Simple. By playing them less.

“Quite frankly, he’s got to be way more productive than he’s been,” McLellan said of Kempe, who has yet to score a goal this season and has averaged fewer than 12 minutes of ice time per game since being dropped to the fourth line following last Wednesday’s loss in Vancouver.

“I can try to justify his minutes and lack of, but he dictates how much he gets on the ice. At this point, I thought we would get a lot more from him.”

Since being hired this offseason, McLellan has preached that message time and again when speaking of his roster at large. This is the first time he’s put those words to action. His handling of Kempe, who signed a three-year, $6-million contract this offseason, is providing an early window into how he operates behind the bench.

McLellan knows every player will have to be treated differently.

“There’s situations you’ve got to mold a little bit more than others, for different reasons,” he said. “There’s the business part, the cap part. There’s asset value and asset management.”

In Kempe, however, he has a promising playmaker who has long been penciled in as part of the franchise’s future. The former first-round draft pick possesses the speed and skill to be a potential top-six center but hasn’t yet learned to put all those tools together consistently during his four-year NHL career.

“With some of the younger players — and we’re going to grow in the future with them — they’ve got to do things right, as do the older players,” McLellan said. “But those players going forward with us, and I think of Kempe as one of them, he’s so valuable to our organization and we need a lot more from him right now. It’s as simple as that.”

McLellan has been tasked to straddle a narrow line with the Kings, trying to keep the team as competitive as possible while also cultivating the franchise’s up-and-coming swell of talent. Kempe, who tallied 37 points during his first full season in 2017-18 before dropping to 28 points last season, is at the crest of that new wave.

Kempe has a more proven track record than Lizotte and Michael Amadio, the other Kings centermen who have jumped him in the lineup. But his production has lagged behind. In six games, he has just two points and a minus-five rating that ranks third-worst on the team. Advanced puck-possession analytics also don’t flatter Kempe, who is ahead of only rookie defenseman Tobias Bjornfot on the team in Corsi-For percentage (which measures the disparity of shot attempts by a team when a certain player is on the ice).

Most of all, outside of his spot on the power-play, Kempe has given McLellan little reason to play during other critical situations.

“There’s areas of the game they can specialize in, and they’ll never come off,” McLellan said.

An example: “I was telling some of the centers on the bench, ‘You want more ice time? Win a draw. We’ll put you out every time. And if you happen to not get off for 30 seconds, there’s 30 more.’ Do that three times a night, and all of a sudden you’ve got a minute-and-a-half more.”

Whereas Lizotte, a pesky turnover-creating, penalty-drawing rookie, and Amadio, a suddenly developed puck-handler and chance-creator, have found their niches, Kempe has too often disappeared during his shifts. Only a half-dozen games into the season, McLellan has already adjusted ice-time accordingly. He’s felt he had no choice.

“These players dictate how many minutes they get,” McLellan reiterated. “I don’t, really. The coaching staff doesn’t. Their output dictates it.”