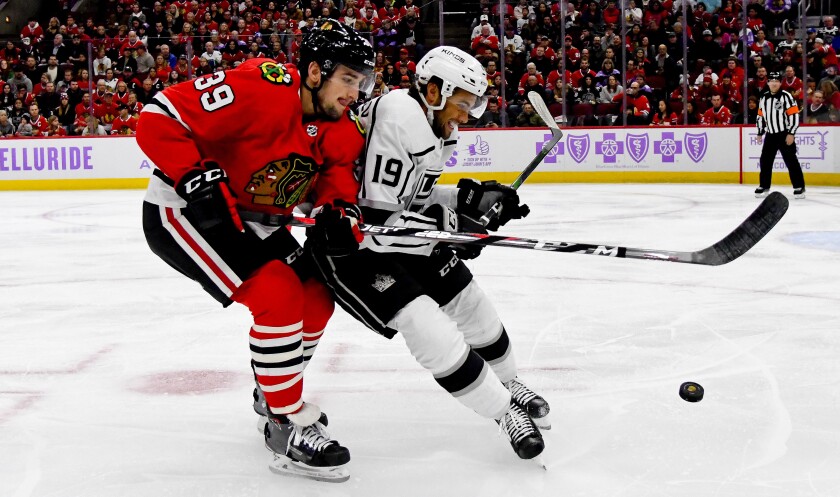 Dylan Strome had two goals and assisted on linemate Alex DeBrincat’s score to help the Chicago Blackhawks beat the Los Angeles Kings 5-1 on Sunday night to end a four-game skid.

DeBrincat set up both of Strome’s goals as the two former junior hockey teammates clicked again and sparked Chicago’s attack. David Kampf and Drake Caggiula also scored to help the Blackhawks bounce back after they were shut out in Carolina on Saturday and managed just two goals in their previous three games.

Robin Lehner made 38 saves and lost a bid for his first shutout with Chicago when Sean Walker scored early in the third period.

Jack Campbell blocked 21 shots as Los Angeles lost its third consecutive game and second in two nights, after falling 5-1 at Minnesota on Saturday.

Blackhawks defenseman Brent Seabrook was a healthy scratch for the second time in his career. Rookie Dennis Gilbert took the spot of the 15-year-veteran, who has one goal, no assists and is a minus-5 in nine games.

Lehner, signed to a one-year contract as a free agent last summer, was solid again. The 28-year old Swede was a Vezina Trophy finalist last season with the New York Islanders.

"This trip was good because it let us know that there's some players that probably can't play in the league right now." - Head Coach Todd McLellan on the LA Kings road trip pic.twitter.com/BVxbaUQm9n

Strome opened the scoring 2:33 in from the slot after taking a pass from DeBrincat off the right wing. Kings defenseman Drew Doughty slid to the ice to try to block Strome’s quick wrister, but it beat Campbell high on the stick side.

Kampf’s first goal of the season, off Alex Nylander’s nifty backhand pass, made it 2-0 at 2:26 of the second. Nylander drove to the net from the left wing and as he tumbled to the ice, slipped the puck to Kampf as he charged down the slot.

DeBrincat set up Strome again with 4:05 left the second as Chicago increase it to 3-0. DeBrincat slipped from the right side of the net into the circle, then dished to Strome who ripped a shot from the hashmarks past Campbell’s glove.

DeBrincat and Strome clicked again on their next shift with 58 seconds left in the period. After taking Strome’s feed off the backboards, DeBrincat fired a quick shot between Campbell’s pads from the slot

Walker cut it to 4-1 at 3:35 of the third. The defenseman skated in from the point and fired a shot between Lehner’s pads from the right circle. Caggiula iced it when a shot deflected in of his right skate with 2:07 left.