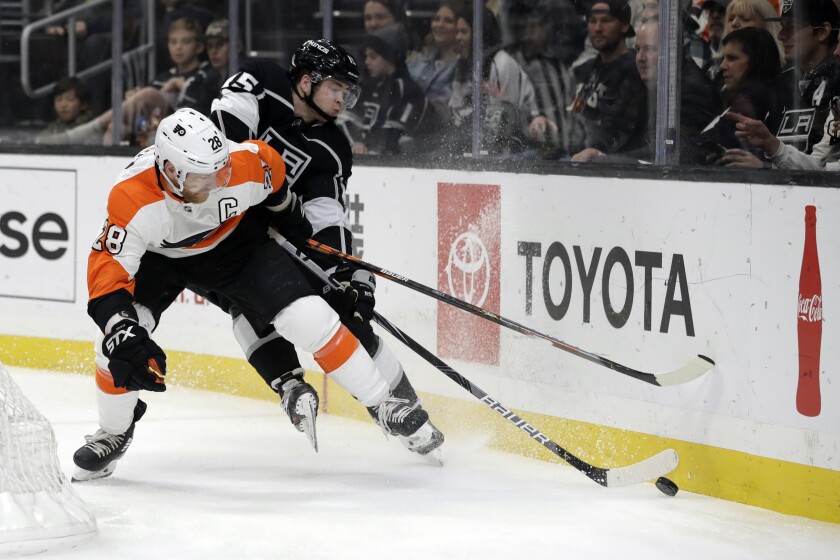 As his team glided around him Monday morning, a day before their 5-3 thumping of the Philadelphia Flyers on New Year’s Eve, Kings coach Todd McLellan reached into his pocket and found a forgotten piece of paper.

It was an old lineup card, from the Kings’ last full-fledged practice. Amid a December schedule that included an East Coast road trip, a three-day mandatory holiday break and very few maintenance days in between, McLellan knew it had been a while since his team’s last true full-service session.

Still, seeing the date on the card struck him.

“It was December 11,” he said, adding up the 19-day gap. “That was probably our last actual practice.”

At the dawn of a new year, a new decade, it’s tempting for the Kings to look toward the future, and to look big in doing so.

The team has one of the best pipelines in the NHL, highlighted by the league-high nine Kings prospects participating in the World Junior Championship, and appears destined for its third lottery pick in the last four drafts.

It has an accomplished coach locked up on long-term contract.

It has a collection of Cup-winning veterans willing to offer guidance through this reboot.

Even without regular practice time in recent weeks, the Kings have begun turning the corner as of late. The lackadaisical, lopsided defeats that marred last season have largely disappeared, complete efforts such as Tuesday’s — the Kings led 4-0 after the first period and were hardly threatened down the stretch — increasingly taking their place.

Now, 12-10-3 in their last 25 games, the Kings aren’t entering the 2020s with the championship-caliber form that defined the last decade. But they aren’t ending the 2010s with a dud either.

“The results aren’t the way we want them to be, but still encouraging,” captain and All-Star selection Anze Kopitar said. “Because we are there. It’s not those blowout games … We’re always in it and, you know, pressing to get better.”

All this, however, had come without regular practice time in recent weeks. And even as the results brightened, the hectic schedule was allowing some bad habits to set in: breakdowns in the defensive zone, bad positioning on the forecheck, a lack of finish around the net.

Though almost unnoticeable to the naked eye, McLellan feared even such small cracks could serve to undermine the club’s lofty plans. So, he kept his squad on the ice for about an hour Monday and even that wasn’t enough to complete everything he planned.

“It’s like a golfer,” the team’s first-year coach explained. “You get out to the range, and you need to work on putting and chipping, your long game and short game, sand game. All that type of stuff. We need to go through everything.

“You forget some of the fine details. You can remind as much as you want verbally or visually. Until you feel it, it doesn’t get to where it needs to be. Practice time is valuable.”

Tuesday’s four-goal first period made that much clear.

Their first tally, a Kyle Clifford wrister, was sprung with a quick breakout pass that looked almost by design. Their next two, scored by Alex Iafallo and Tyler Toffoli, came via a power-play unit that has found its stride over the last dozen games, converting on eight of its past 30 chances (26.7%) after an 11-for-100 start this year. The fourth, an Adrian Kempe snipe, was the result of a short-handed two-on-one.

At the intermission, the team exited the ice to thunderous applause. A couple late Flyers goals — the odd blemishes in goaltender Jonathan Quick’s 32-save victory — didn’t dampen the postgame celebration either.

A long-awaited practice under their belt, they fixed the little things to end calendar year on an emphatic high note, bidding farewell to their most decorated decade with the kind of night they’re hoping to repeatedly replicate in the future.