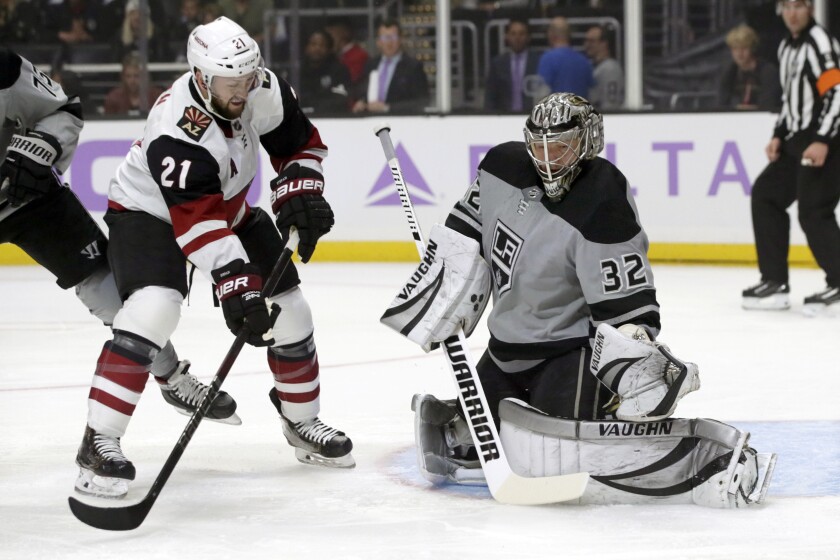 Kings fall to Coyotes 3-2 despite a heavy shot advantage

Once again, the equation just didn’t add up.

So many of the factors, the variables, the stats were in the Kings’ favor Saturday afternoon.

The NHL’s leader in shot differential, they peppered the opposing goal all game, putting 45 pucks on net to the Arizona Coyotes’ 19. Winners in four of their previous five, the Kings overcame a sluggish start to generate most of the momentum throughout. In the dying minutes, they mounted a comeback charge too.

None of it was enough in a 3-2 loss at Staples Center that keeps the Kings last in the Western Conference.

“We’re not playing to stay close, we’re playing to try to win,” coach Todd McLellan said, adding: “I thought we created more, played with a little more authority. … I thought we had what we needed to give ourselves a chance.”

Indeed, it isn’t structural errors or slacking effort that is dragging the Kings down. They are simply struggling to put the puck in the net enough. Saturday’s loss was perhaps the most extreme example yet.

“The finish part is the tough part,” McLellan said. “That’s a question 31 teams ask themselves throughout the season.”

Few clubs, however, are coming up with as seemingly few answers as the Kings.

They average six more shots per game than their opponents, yet have been outscored by 19. They began Saturday ranked 12th in the league in scoring chances created, yet are second-to-last in shooting percentage. Though their special teams continue to struggle, their five-on-five play doesn’t quite square with their 9-13-1 record either.

Such struggles sucked the life out of Saturday’s start. After bouncing back from a bad opening shift, the Kings took eight of the game’s first 13 shots. No. 14, however, found the back of their net, with Phil Kessel cashing in on a creative passing sequence during a Coyotes man advantage.

The Kings responded early in the second. Anze Kopitar buried a power-play goal of his own to tie the score, clobbering a Drew Doughty pass from the corner with a one-timer near the far-side circle. After that, the Kings kept possession in the offensive end for most of the frame as well.

But one neutral zone giveaway sprung the Coyotes the other way for a rush that ended with Lawson Crouse (who later left the game after a scary sliding collision with the boards) poking a bouncing puck past Jonathan Quick (who stopped 16 shots) to make it 2-1.

“All it takes is one mistake,” center Blake Lizotte said. “Five-on-five we were good, except for 30 seconds. That’s the difference.”

Still, the Kings came back and controlled the third, outshooting the Coyotes 17-7 and testing Arizona goalie Antti Raanta with several chances on a power play. But they couldn’t break through until after the Coyotes tacked on an empty-netter to put the game out of reach, Nikolai Prokhorkin’s consolation tally with 1:35 remaining unable to keep the Kings from falling to 0-11-0 when trailing after two.

McLellan couldn’t identify any quick fixes to the Kings’ goal-scoring struggles. He thinks they’ve been plenty patient and isn’t sure simply throwing more bodies in front is the answer either. Really, there is no perfect formula for finding the back of the net. It requires skill, scoring sense, and a little bit of luck.

As long as the Kings continue to lack that part of the game — their 2.61 goals-per-game average is fourth worst in the NHL — losses like Saturday’s likely will keep piling up.

“While it’s happening, it’s important to not get frustrated,” defenseman Alec Martinez said. “At the end of the day, against a team like that, you’ve got to stay patient, stay playing the game the right way, and you will get chances.”