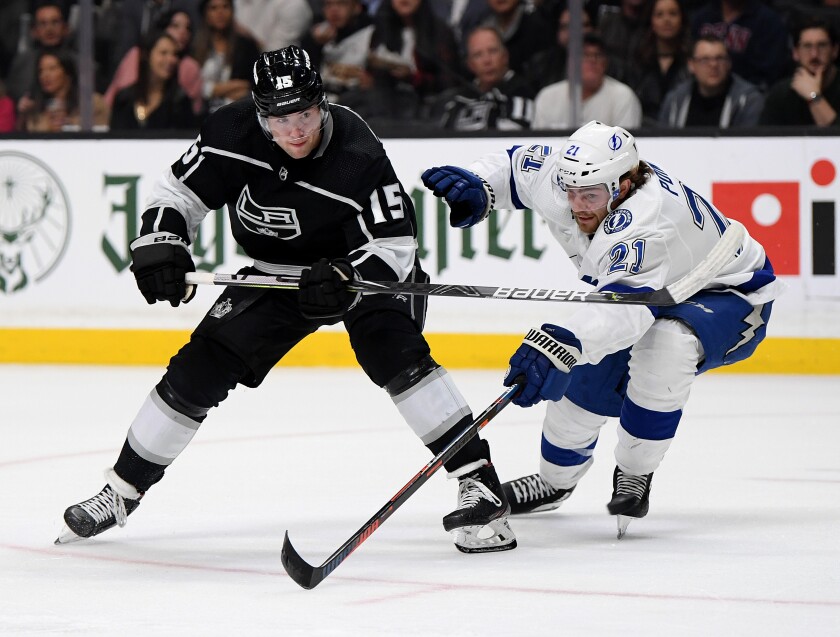 Kings pay tribute to Kobe Bryant at Staples Center: ‘It’s going to sting for a while’

They arrived wearing his jersey, then slipped into T-shirts bearing his and his daughter’s names. They stepped onto the ice while two banners hung from above, his retired Nos. 8 and 24 illuminated by a spotlight. For the first time since his death, they brought sports back to Staples Center and helped their heartbroken city heal just a little bit more.

The Kings may not have ever technically counted Kobe Bryant as one of their own, but Wednesday night they honored him like one.

“The last few days, we can all see what’s going on around the city, the amount of people that came out and paid their respects to obviously one of the greats in the game of basketball,” Kings captain Anze Kopitar said during a pregame TV interview, having along with the rest of his teammates arrived in the arena wearing a Bryant jersey.

“For us as hockey players, being for so many years connected to the Lakers just next door, we felt like we had to pay some sort of tribute.”

Bryant’s memory hung over the Kings’ 4-2 loss to the Tampa Bay Lightning like a somber shroud. Four days after the Lakers legend died in a helicopter crash that also took the lives of eight others, including his 13-year-old daughter Gianna, the Kings brought purple and gold back to the building the Lakers legend called home for so long.

Prior to the puck drop, former Kings broadcaster Bob Miller emceed a minutes-long tribute to Bryant and the other victims of Sunday’s accident. In the stands, purple and gold blotches belted out chants of Bryant’s name. During a 24-second moment of silence, Kopitar buried his face in his gloves.

“Even though you know it’s coming, you still get choked up,” Kopitar said. “It’s going to sting for a while.”

During the first intermission, the farewell speech Bryant gave after his final NBA game in 2016 was shown on the video board. During the game, in which the Kings blew a 2-0 lead, purple and gold stickers were placed on the backs of the Kings’ helmets. Afterward, two Bryant jerseys hung in the corners of their locker room.

And on a night in which players around the NHL and NBA changed their numbers in honor of Bryant, Kings defensemen Drew Doughty (No. 8) and Derek Forbort (No. 24) each sat out the game because of injuries.

“It struck home,” Kings coach Todd McLellan said of Bryant’s death. “It was a jolt.”

Unlike some of the players — nine Kings were with the franchise during Bryant’s last NBA season, and the Lakers and Kings shared the same practice facility in El Segundo during most of Bryant’s career — McLellan never met Bryant. Only in the last several days did the team’s first-year coach come to fully understand Bryant’s ubiquitous influence in the city.

“There was no shortage of ink going on the paper with all the quotes about him,” McLellan said. “I’ve read a book once: ‘Who Will Cry When You Die?’ I was thinking of that. The comments that come out after you’re gone, what will people say about us? It’s pretty remarkable the comments [about Kobe] now.”

Then, McLellan, a father of two boys, paused and added: “I didn’t realize he was such a good father.”

Kopitar had known all this for a long time. He had met Bryant and admired him. Before reporters rushed to his locker, he put the purple and gold T-shirt back on. His voice beginning to catch again, he summed up Bryant’s legacy best he could.

“My favorite thing about him is he wanted to win no matter what,” Kopitar said. “Whether that’s playing hard, or finesse, there’s not very many nights where he took the nights off. He was the ultimate competitor. A closer. A champion.”