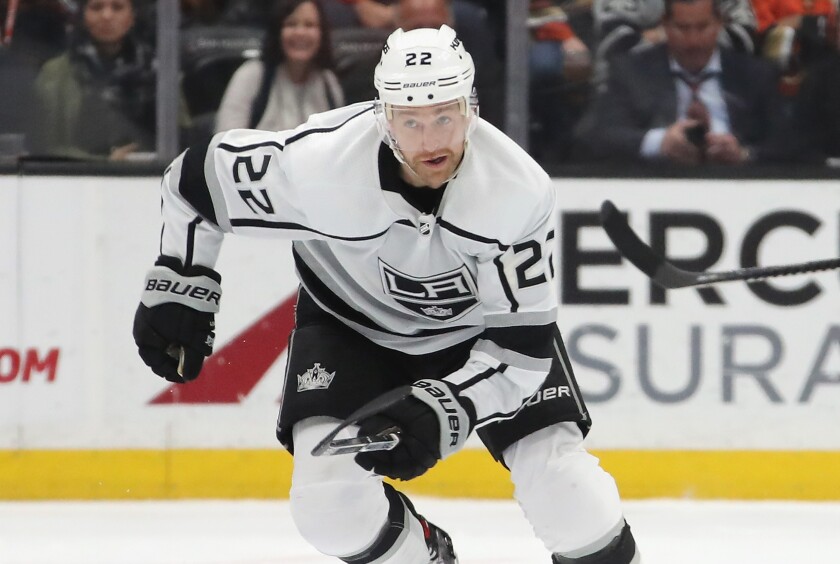 The Kings made a flurry of roster moves Friday coming out of the NHL’s three-day holiday break.

Forward Trevor Lewis was placed on injured reserve with an upper-body injury, retroactive to Dec. 21. Forward Martin Frk and defenseman Kale Clague were recalled from the club’s minor-league affiliate, the Ontario Reign. In addition, forward Dustin Brown did not travel for the team’s trip to San Jose and Vancouver because of illness.

This is Lewis’ second trip to injured reserve this season. The 32-year-old left Saturday’s game at Buffalo after a collision with Sabres forward Rasmus Asplund left him laying on the ice and needing help to get back to the bench. He did not play in the Kings’ home loss to St. Louis two days later.

Prior to that Monday night defeat, coach Todd McLellan said Lewis “feels better today than he did in Buffalo,” but that the team would have to reevaluate his health after the break.

Frk and Clague are being recalled for the second time this month. Clague, a promising 21-year-old with a left-handed shot, was drafted in the second round in 2016. After a full season with the Reign last year, he finally made his NHL debut in the Kings’ loss to the Sabres last week, posting a minus-two rating in 17:57 of ice time.

“Great legs, good vision, jumped into the play,” McLellan said of the defenseman’s debut. “Used the tools, the assets that he has to be successful. That’s a real good thing. Sometimes players come in and they get intimidated. They want to play safe. He didn’t do that. Thus, he didn’t have to defend that much, which was a good thing. A real good first night for him.”

Frk, meanwhile, returns to the NHL roster after being a healthy scratch in the St. Louis game. The 26-year-old spent parts of the last three seasons with Carolina and Detroit and has 31 points in 100 games. This season, the winger is leading the Reign in goals (14) and points (23) and is second in shots (68) in 26 games.

Prospect Rasmus Kupari has been ruled out of the remainder of the World Junior Championships after sustaining a knee injury in Team Finland’s tournament opener Thursday. The Kings do not yet know the extent of the injury to Kupari, who reportedly will return to Los Angeles for further evaluation.

Kupari, 19, was a first-round draft pick in 2018 and was loaned to Team Finland to participate in the premier under-20 event. In 27 games with the Reign this season, he had six goals, eight points and a minus-eight rating.

This was Kupari’s third time participating in the World Juniors. In his previous two appearances, the center collected five points in 12 games.

The Kings signed 19-year-old prospect Aidan Dudas to a three-year, entry-level contract. The 5-foot-9, 185-pound center was drafted by the club in the fourth round in 2018 and played six games with the Reign last season.

This year, Dudas has been playing with his junior-hockey team, the Owen Sound Attack, and he is the captain. In 23 games, he has 11 goals, 30 points and a plus-12 rating. He is representing Team Canada in the World Juniors.