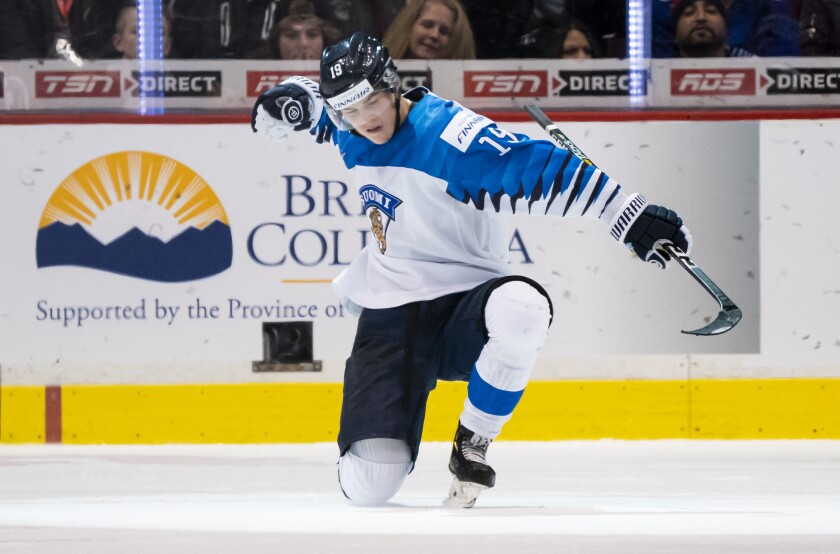 Rasmus Kupari went to the World Junior Championship last month in a groove. After a slow start to his first full season in North America, the Kings prospect had found his footing with the Ontario Reign, the Kings’ minor-league affiliate in the American Hockey League. As he went off to join Team Finland, the Kings brass was eagerly anticipating his second half of the season.

They’ll have to wait until at least the summer to see him on the ice again. The team announced Tuesday that Kupari will undergo surgery for a torn ACL in his left knee, bringing his season to an end.

Kupari, a first-round pick in 2018, got hurt in Finland’s first game of the World Junior Championship, the sport’s premier annual under-20 national team tournament. During that Dec. 26 game against Sweden, Kupari collided with a player in the neutral zone and fell awkwardly to the ice. He did not return to the game and days later flew back to Los Angeles for an MRI.

Kupari’s season will end after only 27 games in the AHL. He collected six goals, eight points and a minus-eight rating. After some early struggles adapting to the bigger ice sheet and more physical style of play in North America — aside from offseason development camps, Kupari previously spent his entire junior career in Finland — the 6-foot-1, 185-pound center had been impressing Kings evaluators before getting hurt.

“He’s younger, he’s a 19-year-old, he could still be playing junior hockey — and he’s playing a regular role in the American Hockey League,” director of player personnel Nelson Emerson said last month. “His speed, when you see him, it’s like, ‘Whoa.’ The way he can get wide and get around the ice is phenomenal.”

One of the final cuts during the Kings’ preseason camp, Kupari joined Jaret Anderson-Dolan and Gabe Vilardi as the three young centers of the future playing with the Reign. Though Kupari’s production came in spurts, Emerson was impressed with the fiery competitiveness he saw from the otherwise soft-spoken speedster.

“When he takes a hit, he takes a little glance over to the guy who did it,” Emerson said. “Sometimes, within the shift, before it’s over, that guy is getting something — a whack or a hack. Kupari’s going right back at him. He doesn’t take anything. We like to see that.”

Emerson also praised Kupari’s defensive zone play, especially given his age. He called Kupari’s first 2½ months with the Reign a period of “excellent development” and expected him to play a key role in the team’s push for an AHL playoff spot. A first career NHL call-up didn’t appear out of the question either.

Now, all of that is on pause until at least next season.