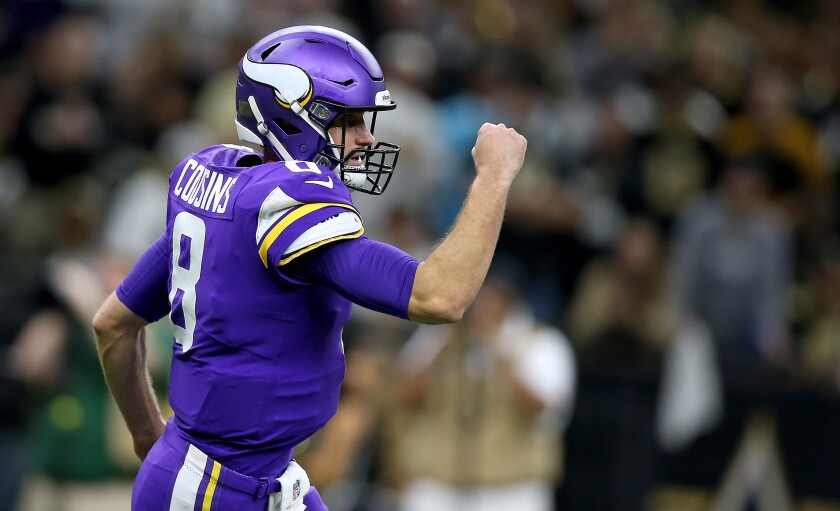 It’s no country for old men because — Holy Skol! — the Minnesota Vikings have knocked Drew Brees and the New Orleans Saints out of the playoffs for the second time in three years.

Hours after the postseason of 42-year-old Tom Brady came to an abrupt end, the same happened for fellow future Hall of Famer Brees, 40, whose team was beaten in overtime Sunday before a stunned and yelled-out crowd at the Mercedes-Benz Superdome.

Kirk Cousins, who had an abysmal record in big games, came through in a huge way for the underdog Vikings, throwing a four-yard pass to tight end Kyle Rudolph in the back corner of the end zone in overtime to seal a 26-20 win.

“No. 8!” Vikings coach Mike Zimmer said in the raucous and cramped visitors locker room, summoning his quarterback into the cheering scrum of purple-clad players. “How’s it feel to win a playoff game, baby?”

A gleeful Cousins accepted the game ball, then addressed his teammates, punctuating his message with a pumping fist.

“That’s how we’ve won all year — team, right?” he said. “You held them to 20 points, men. You gave us a chance at the end. But I’ve got three words for you.” He then invoked his jugular-bulging catchphrase from his Washington Redskins days. “YOU LIKE THAT?”

The beleaguered Cousins came into the game with a 6-30 career record against teams that finished seasons at .500 or better, and his team was facing a living legend in Brees, who had completed nearly 75% of his passes this season and hadn’t been intercepted in his previous five games.

That streak would end in this one, and Brees would also lose a fumble for the first time all season, the ball tumbling from his surgically repaired hand that was injured during a Week 2 loss to the Rams.

“It’s disappointing when you’re not holding the trophy at the end,” Brees said, “no matter how you look at it.”

It was two years ago that the Vikings devastated the Saints in the “Minneapolis Miracle” game, when Case Keenum threw an against-all-odds 61-yard touchdown pass to wide receiver Stefon Diggs on the last play of the game, a divisional matchup New Orleans had all but won.

Perhaps emotionally drained, the Vikings would lose at Philadelphia in the NFC championship game. This time, they will try to keep motoring in a divisional game at top-seeded San Francisco.

Cousins, 31, is suddenly among the elder statesmen in a field of playoff quarterbacks that features Green Bay’s Aaron Rodgers, 36, but also a bunch of relative youngsters, including Baltimore’s Lamar Jackson, who turns 23 on Tuesday, as well as Kansas City’s Patrick Mahomes and Houston’s Deshaun Watson, both 24.

These playoffs marked the first time in the wild-card round that two of the four games were decided in overtime. Houston knocked off Buffalo that way Saturday.

Even though his team lost, Saints reserve quarterback Taysom Hill was stupendous. An incredibly versatile player who steps in for Brees at various points, he had a 50-yard completion — the longest pass play of the game — caught a 20-yard touchdown pass, and ran four times for 50 yards, earning a first down on each carry.

“He played unbelievable today,” Vikings linebacker Eric Kendricks said of Hill. “Really, he’s been doing that all season. Kind of shows up on tape. Every time, we knew where the play was going to be and he was still able to execute them.”

Hill was one of the few offensive weapons who was effective against an otherwise smothering Minnesota defense. Brees was sacked three times after being sacked just 12 times in 11 games during the regular season. The Vikings got a strong push up the middle to get to him, their strategy in light of the ability of Saints tackles to secure the edges.

“We kind of watched the Falcons game,” said Vikings defensive end Danielle Hunter, referring to the Nov. 10 game in which Atlanta sacked Brees six times in a 26-9 Superdome shocker. “We knew about getting pressure on Brees, who would either hold the ball or stand back, not make the perfect throws he normally makes. That was part of our game plan, just getting pressure up the middle.”

It was Hunter who forced the Brees fumble at the Minnesota 28-yard line, thwarting what could have been a go-ahead touchdown drive and taking the oxygen out of the chuffed-up Superdome.

The play that really knocked the wind out of the place came in overtime, when Cousins connected with receiver Adam Thielen for a 43-yard gain to the New Orleans two-yard line. The catch was a spirit-crusher for the Saints and redemption for Thielen, who had lost a fumble on the third offensive play of the game.

Thielen made a gesture after that miscue, using two fingers to simulate the flushing of a toilet. It’s something he has been doing after bad plays since his days at Minnesota State in Mankato.

As a result of that attitude, the Vikings remain flush with opportunities.