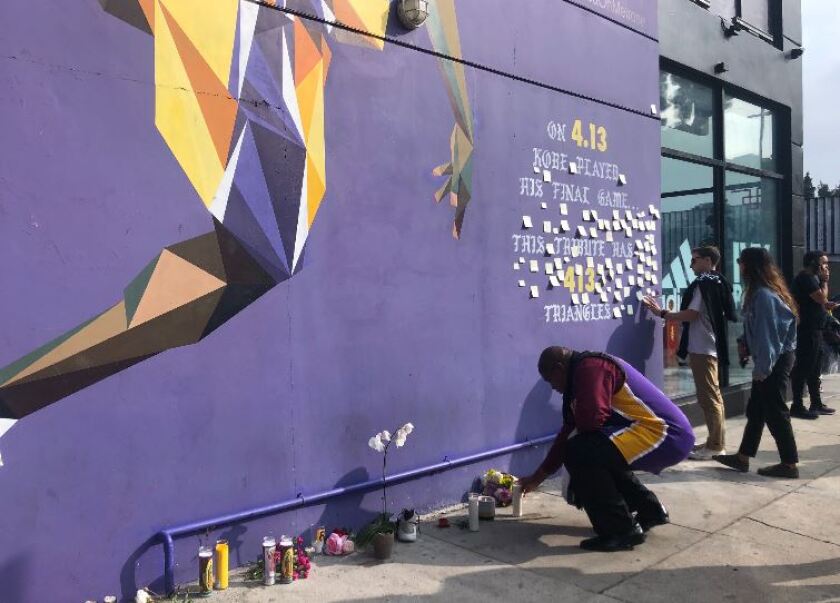 The mural towered over Melrose Avenue, and for three years, since it was painted outside of the sneaker shop across from Fairfax High, Ethan Anderson would stare at it from a classroom window. Every day he walked or drove past, looking at it so often that the towering likeness, soaring across a purple wall of Shoe Palace, merely had become a part of the landscape.

To Anderson and so many others who’d grown up in the long shadow he cast, it seemed Kobe Bryant always would be there, his presence looming forever over Los Angeles. But on Sunday morning, Bryant died in a helicopter crash that killed eight others, including his daughter Gianna, and as Los Angeles mourned, turning the sidewalk outside Shoe Palace into a shrine, Anderson found himself thinking about that mural and the legacy of the man in it.

“It never really hit me until he passed away that, wow, this is a guy that God has blessed us with that probably will never come again,” Anderson said. “Kobe is not just a regular basketball player.”

Unlike others baptized on the city’s blacktop, Anderson didn’t grow up worshipping at the altar of the Black Mamba. He lived just a few miles from Staples Center but idolized LeBron James instead, long before the current Lakers star was considered King in this city.

But as he grew older and started taking basketball more seriously, Anderson came to understand Bryant in a way he hadn’t before. He started waking up at 5:30 a.m. to shoot in the Fairfax gym, and as he rolled out of bed, he thought of Bryant, who would wake up earlier than that to work out at the Lakers practice facility.

“I couldn’t give you a day in my high school career that I said, ‘Oh, I’m excited to go wake up at 5:30 in the morning,” Anderson said. “Just because I’m in the gym by myself or with my trainer at that time, doesn’t mean that nobody’s gonna know what I’m doing at that time. There’s no need to go on social media and say, ‘I’m waking up at 5:30 in the morning,’ just to gloat. Kobe never did that.”

It was that relentlessness that stood out most, as Trojans coaches and players, still unnerved by his sudden passing, offered memories of Bryant on Monday.

For Jason Hart, the mentality that turned Bryant into a legend was apparent long before he came to Los Angeles. The Trojans assistant coach graduated from Inglewood High in 1996, the same year Bryant graduated from Lower Merion and left for the NBA. The two prep stars met at the Magic Johnson All-Star Game the year before, and Hart knew then that the scrawny 17-year-old from Philadelphia was different.

It was that aura that made him seem invincible to those watching from afar — and also made his sudden death almost impossible to believe.

“When I first found out, I thought it was fake news,” said freshman Onyeka Okongwu, who was at the women’s basketball game when he learned. “I would never think he’d be the one. He’s meant so much to a lot of people in SoCal.”

The news was too much to process so soon for Jonah Mathews, who grew up in Santa Monica. The senior guard, who calls Bryant his favorite player, said he still was too distraught to comment about his death Monday.

It’s an absence that much of L.A. still is struggling to accept. For so long, Bryant loomed over the city, and here, in this small corner of its hoops world, that absence was impossible to ignore.

As Anderson and his teammates tried to come to terms Monday, the freshman point guard marveled at the legacy Bryant leaves behind.

“It was a dream of mine to have that type of influence on people, the way he inspired people,” Anderson said. “People shoot paper balls in the trash can and saying his name, it’s unbelievable that an orange ball can take you that far in life. … He was able to have a worldwide reach. A kid in China who’d never even been to America, never seen him in person, who’d only seen him on TV, to inspire someone like that? That’s a dream of mine.”