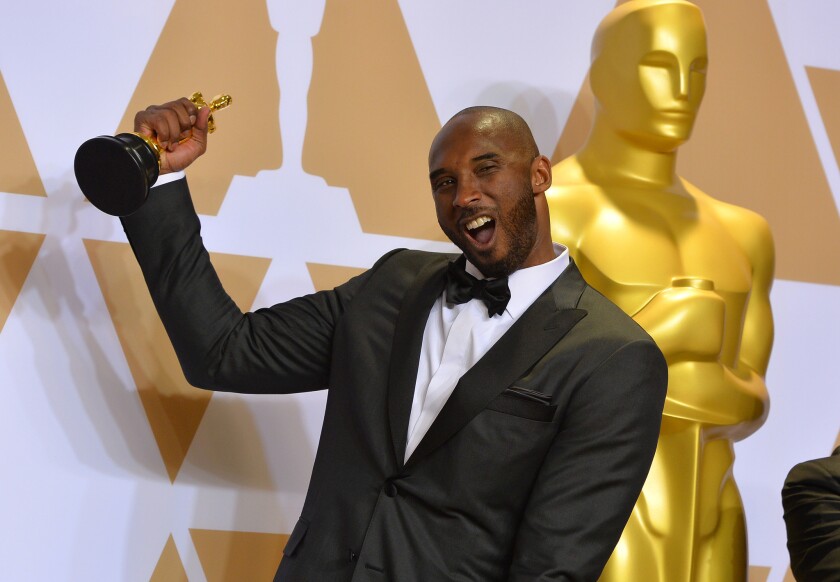 In the twilight of Kobe Bryant’s career with the Lakers, the 18-time All-Star shared a vision with billionaire Chris Sacca: When his time in basketball ended, he would become an investor.

“To the shock of a couple other people sitting with us, I replied, ‘Kobe, I’m sorry, but I just don’t take you that seriously,’ ” Sacca recalled in an email to The Times. “He laughed … then said, ‘What would change that?’ ”

Sacca gave Bryant a list of books, videos, TED talks and podcasts to study about startups and investing, figuring that would be the end of it.

“But over the next couple months he kept calling and texting me at all hours of the day and night wanting to discuss his reactions to specific chapters and ideas and relate it to other stuff he was reading that I hadn’t assigned,” Sacca said. “Literally at 3 a.m. he would be on his physical therapy treadmill and call me. His obsession with learning this stuff was so 24/7.”

The relentless work ethic that propelled Bryant’s 20 years in the NBA also helped drive his transformation into a business mogul, author and Oscar-winning filmmaker. Bryant, who died Sunday along with eight other people in a helicopter crash in Calabasas, built a wide-ranging empire that includes a venture capital fund, multimedia production company, athletic training centers and books.

“What he was aspiring to do was great because he wasn’t just going to be slapping his name on things for vanity,” said Chris Silbermann, chief executive of talent agency ICM Partners. “He was trying to do everything with a purpose. It was just like how he played — he had a plan, philosophy and a purpose around everything he did.”

In 2013, Bryant quietly co-founded a venture capital fund with entrepreneur Jeff Stibel to invest in media and tech companies. They unveiled Bryant Stibel & Co. in 2016, months after Bryant played his last game as a Laker. Its high-profile investments have included legal services company LegalZoom and Epic Games, the maker of smash hit “Fortnite” — as well as misfire Juicero, whose Wi-Fi-compatible juicer was ultimately laughed out of business. By September 2019, the firm reportedly managed more than $2 billion in capital.

Meanwhile, Bryant was investing on another front as well. In 2014 he announced he’d formed Kobe Inc., based in Newport Beach, with plans to develop brands that would upend the sports industry. The first investment through the company was sports drink BodyArmor. That initial $6-million investment grew to a value of $200 million after Coca-Cola acquired a minority stake in 2018.

“Going into the first meeting, I didn’t know anything about his work ethic,” Sacca said. “Had I, I wouldn’t have been surprised by how hard he worked to understand the world of entrepreneurship and investing.”

In a hint of the diverse business ventures to come, Bryant partnered with Alibaba, the Chinese online retail giant, in 2015 to collaborate on a social media platform, Kobe-branded products and the release of his Showtime documentary “Muse.” Bryant served as an executive producer on the film, which provided an inside look at his journey from childhood to the NBA.

“I love, love, love storytelling,” Bryant said in late 2015. “I love framing stories that inspire. I love educating in a very creative way. I love putting pieces of the puzzle together.”

The production company’s most well-known effort was a 5 1/2-minute animated short that Bryant wrote and produced called “Dear Basketball.” It was based on a poem of the same name that Bryant wrote to announce his retirement. The project, scored by five-time Oscar-winning composer John Williams, won an Academy Award for best animated short in 2018.

“As basketball players we’re really supposed to shut up and dribble,” Bryant said in his acceptance speech. “I’m glad we’re doing much more than that.”

After the ceremony, Bryant hinted at the difficulty in transforming from basketball superstar to entrepreneur, telling USA Today: “It’s a hard thing for athletes to start over. You have to begin again.”

But it didn’t seem to faze him.

“The word on the street about his company is that he was very earnestly doing the work and wasn’t taking anything for granted,” Bill Gerber, a film and television producer whose credits include “A Star Is Born” and “Gran Torino,” said of Bryant’s entertainment industry chops.

Bryant found success outside Hollywood, too. He co-founded the Mamba Sports Academy, located in Thousand Oaks and Redondo Beach, in 2018. The business, which bills itself as a “full-circle facility designed to update the way men, women and youth approach human performance,” has hosted players from the NBA and WNBA, offered football strength and conditioning, Brazilian Jiu-Jitsu tournaments, volleyball camps and sports performance conferences.

Bryant made regular appearances in Thousand Oaks to coach his 13-year-old daughter Gianna’s AAU basketball team. She was among those killed in Sunday’s crash.

Bryant also found time to write. His book “The Mamba Mentality” — using the nickname he gave himself during his basketball career — was released in late 2018. It offered a “deep dive inside the mind” of Bryant.

“I remember when, as a kid, I got my first real basketball,” he wrote in the opening. “I loved the feel of it in my hands, I was so enamored with the ball that I didn’t actually want to bounce it or use it because I didn’t want to ruin the pebbled leather grains or the perfect grooves.”

It was the bestselling book in any category on Amazon on Sunday evening. No hard copies remained in stock.

Last year, Granity published a young adult novel based on a story by Bryant: “Legacy and the Queen,” about a tennis-playing girl who goes on a magical adventure. He also created the kids podcast “The Punies,” focused on children who play sports together and learn life lessons along the way.

“I think Kobe relentlessly put himself in the shoes of others,” Sacca said. “There’s the story about how Kobe read the NBA referees’ handbook to learn where their blind spots were. He did the same with venture investing. Combine that with his obsessive work ethic, and it’s clear that his success may have been lucky, but it was no accident.”