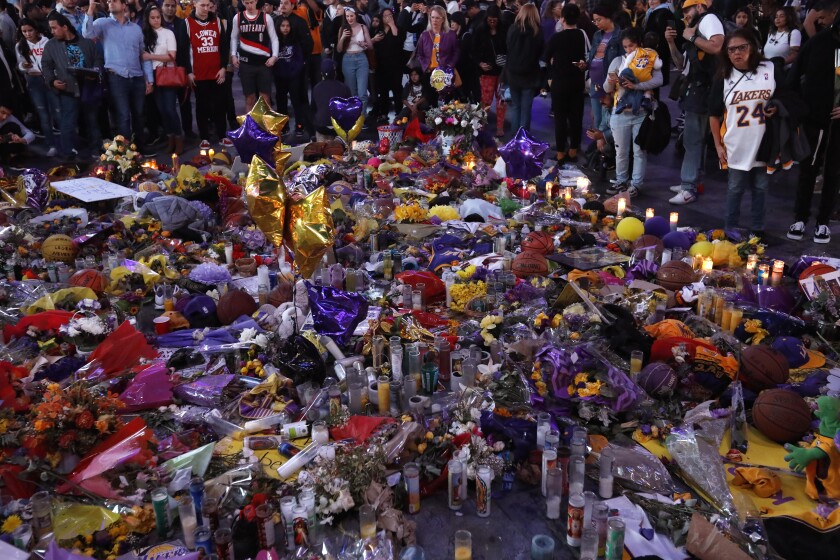 The Lakers along with Staples Center and L.A. Live have collected the memorial items left in honor of Kobe Bryant and will wait for instructions from the Bryant family.

Lee Zeidman, the president of Staples Center, L.A. Live and Microsoft Theater, tweeted that the cleanup began Monday at 4 a.m. at L.A. Live and they had boxed 1,353 basketballs dedicated to Bryant and his 13-year-old daughter, Gianna, who died along with seven others when their helicopter crashed into a hillside in Calabasas on Jan. 26.

Vanessa Bryant last week asked for some of the items to be preserved for the family. The Lakers began collecting items left at their practice facility in El Segundo on Sunday.

“After boxing everything up, and due to the overwhelming amount of shoes and stuffed animals and basketballs and everything else, we reached out to the Lakers and determined it was best for us to store everything at L.A. Live until further notice,” Zeidman said. “And that’s what we’re doing.”

We began the cleanup at 4am ⁦@LALIVE⁩ XBox Plaza and we have now boxed 1353 basketballs dedicated to Kobe and Gianna. Truly amazing the outpouring of love from the City of Angels in honor of the 9 who lost their lives 1/26/20 pic.twitter.com/MUN21LNupH

Zeidman said they will take the perishable items, compost them and spread them around the complex. That idea came from when Manchester Arena in England became the site of a suicide bombing after an Ariana Grande concert in 2017. Manchester took “all the flowers and everything and they took them all and they composted everything and they spread them around the city,” Zeidman said.

“So we’re going to compost all those flowers out there and spread them around the plants in and around L.A. Live and in and around Staples Center,” Zeidman said. “So that means that all those fans that took the time to buy the flowers and plants and brought them down there, some of that will still be around the site.”

In lieu of leaving more items at Staples Center or L.A. Live, it has been suggested that fans donate to MambaSportsFoundation.org or MambaOnThree.org.