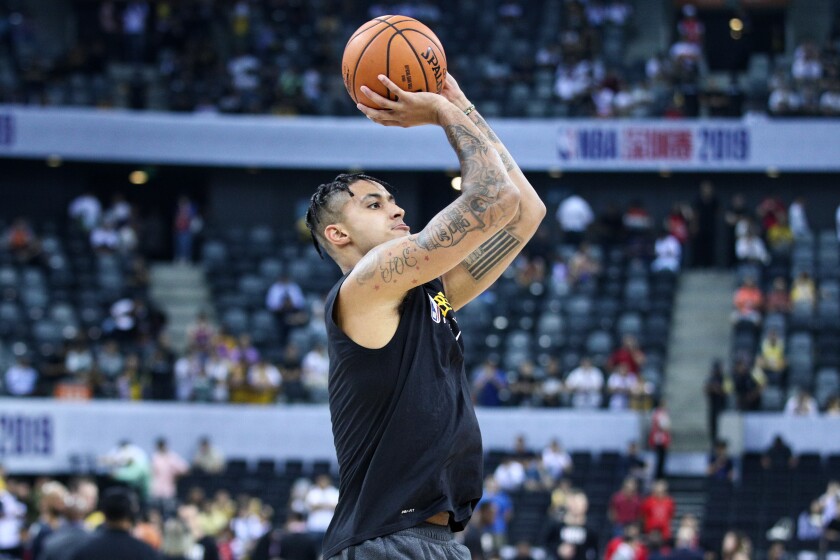 Kyle Kuzma eager to make an impact with rebuilt Lakers

As Kyle Kuzma watches the Lakers play without him, he’s seeing ways in which he can impact the game upon his return.

“I get super excited, because I know all the work that I put in this summer, and I feel like what this team needs is exactly what I worked on this summer,” Kuzma said. “It’s gonna be a surprise to a lot of people.”

The third-year forward began to ramp up his work on the court over the last few days. On Friday he participated in about 10 minutes of four-on-four scrimmaging. On Sunday he scrimmaged for about 25 minutes, then did shooting drills after practice.

“I’m anxious, but at the same time it’s not really frustrating because I know my time’s gonna come when it comes,” he said. “Kind of just taking a control-what-you-can-control mind set going after it.”

Playing four-on-four involves contact, and that’s something the Lakers wanted to see before allowing him to return to a game. It is only half-court contact, though. The next step would be a full-court scrimmaging with contact.

‘You check out his pickup games that he’s playing in pre-practice and see how he’s moving, more than anything,” Lakers coach Frank Vogel said. “And the biggest thing for me is how is he feeling after, you know what I mean? And so far, so good. Still feeling good with the increased activity. We’re eager to get him back.”

Kuzma has been out with a stress reaction in his left ankle. He was diagnosed with the injury this summer while playing with Team USA in Australia, and couldn’t continue with the team to play in the World Cup in China.

“I knew something was wrong because I woke up two mornings removed from my injury, and I was hurting, and I said, ‘Yeah, this is gonna take some time,’” Kuzma said. “So just being able to be here, be around the team, understand that it’s a long season, it’s 82 games, so I wasn’t really pressed to come back super early. … I knew I want to be 110% and hit the ground running when I get out there on the floor.”