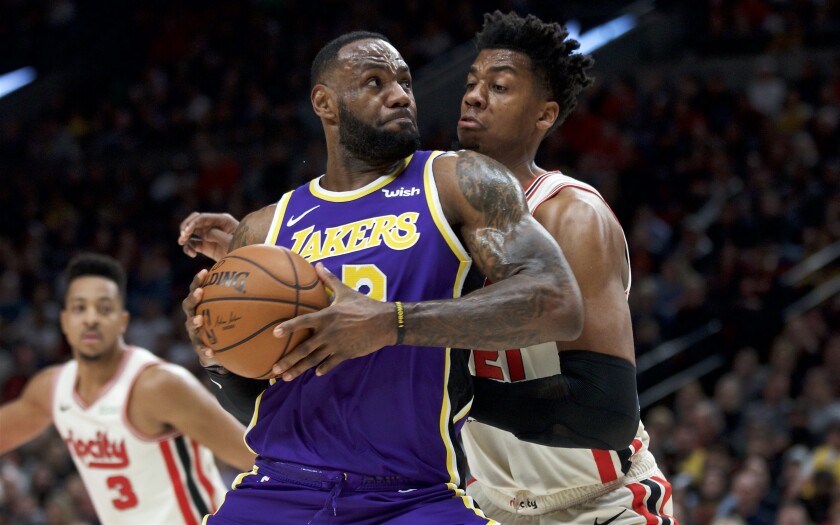 The first losing streak of the Lakers’ season ended Saturday night in a 128-120 victory at Portland.

The Trail Blazers fought valiantly, with 31 points from Damian Lillard and 19 points and 16 rebounds from Hassan Whiteside, but dropped their third consecutive game.

Kuzma led the Lakers for a second game in a row. He scored 24 points making nine of 17 shots, while James added 21 points with 16 assists and Davis scored 20. Caldwell-Pope scored all 13 of his points in the second half, when he made all three three-pointers he took.

Three games after the Lakers’ bench scored just four points, their reserves contributed 72. Rajon Rondo had 15 points and four assists off the bench.

“Rondo came in with so much, his pace was incredible,” James said. “Kuz is keeping up his streak of scoring the ball with the punch we’ve been wanting all year. He’s getting back to his groove. And AC [Anthony Caruso], and Dwight [Howard] was a monster in the paint. Everybody else just chipped in. It was a good all-around game.”

The Lakers improved to 25-7 and will open a five-game homestand Sunday against Dallas. James reaggravated an elbow injury and Davis reaggravated a shoulder injury, but both players said they plan to play against the Mavericks.

Davis predicted Saturday’s win before the morning shootaround. He said the Lakers found their competitive spirit during a Friday film session and practice after losing four games in a row, including blowing a second-half lead against the Clippers on Christmas.

“We were ... getting pretty upset about the last game and how we lost,” Davis said. “We wanted the effort to come in and get back in the win column.”

Coach Frank Vogel told his players he was edgy and angry, and he felt that energy from them too. That intensity continued into practice on a day when the season’s first bit of drama swirled.

Kyle Kuzma’s trainer, Clint Parks, posted messages on Instagram that were critical of James in comparison to Kawhi Leonard, whom Parks also trained. Social media buzzed with suggestions of a rift between the two Lakers. Kuzma approached James on Friday to distance himself from the comments.

“I just told him that I can’t control what another man says,” Kuzma said. “Obviously I don’t feel that way. Everybody knows that me and LeBron have a great relationship.”

James said of Parks: “I’ve never met the guy, I don’t know the guy, I could care less about the guy.”

Kuzma said multiple times Saturday morning that he didn’t care about all the chatter over the incident. On Saturday night, he produced a dominant first half, scoring 20 points, which he said had nothing to do with the social media kerfuffle.

Almost as soon as Kuzma checked into the game, James passed him the ball. Kuzma gave it right back to James, who hit the Lakers’ only three-pointer of the first quarter.

“I just feel like me,” Kuzma said after the game. “I just feel aggressive. Confident in my body. I’m healthy and I worked my ass off this summer to do what I do.”

The Lakers controlled most of the second quarter and took a seven-point lead into halftime. Midway through the third, Portland went on an 11-0 run to take an 86-85 lead with 5:15 left in the quarter. It was their first lead of the second half.

The Lakers took a timeout, then finally broke their drought with a jumper from James.

With 8:38 left in the game, James blocked Anfernee Simons at the rim and moments later Kuzma used a Euro step to score and stretch the lead to 109-101. Caldwell-Pope added a pair of corner threes to help extend the lead to double digits each time.

James exited with 25 seconds left to a standing ovation from the Lakers fans in the Moda Center.