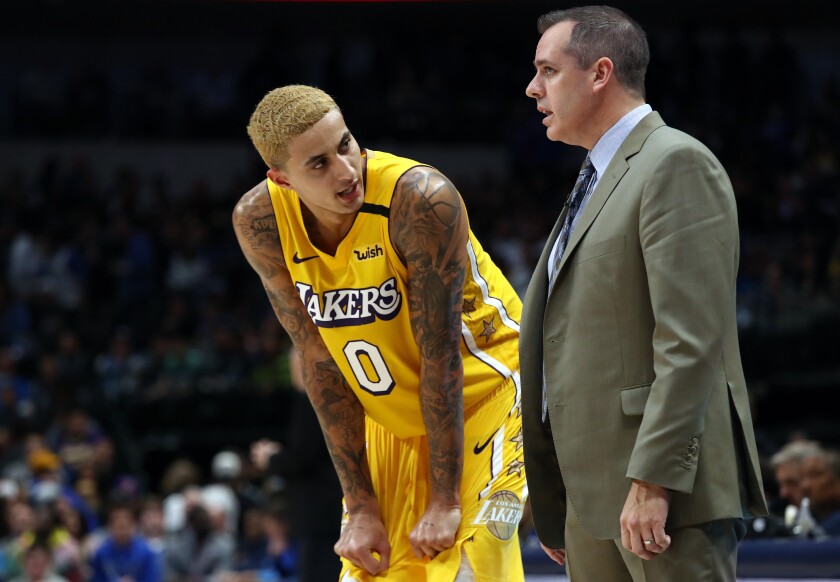 Kyle Kuzma just increased his value to the Lakers, but shot down trade talk

His immense value to the Lakers was on display over the weekend, when Kyle Kuzma stepped up to fill a big void and delivered dazzling performances, each more impressive than the last.

He started in place of the injured Anthony Davis (bruised backside) Friday at Dallas and scored a season-high 26 points in a 129-114 win, the Lakers’ seventh straight. Then Kuzma followed that with another high of 36 points Saturday at Oklahoma City, with Davis and LeBron James (flu-like symptoms) both out, leading a 125-110 win.

Naturally, Kuzma was asked if his inspired play had anything to do with his name coming up in trade speculation.

“Nah, that’s for y’all to talk about,” Kuzma said Saturday night. “I’ve been through it multiple times and obviously I see it. But it don’t even matter at this point.”

Rajon Rondo joked that with James and Davis both out against the Thunder, “I knew it was going to be about another 54 extra shots and Kuz was going to take 45 of those.”

“He played great last night,” Rondo said Saturday night. “He’s letting the game come to him. He’s not forcing tough shots. He’s hitting tough shots as well. But that’s what he does and that’s why they kept him here.”

When James and Davis return and Kuzma goes back to his sixth-man role, the question presented to coach Frank Vogel was how real would these current numbers still be.

“I think it’s real,” Vogel said. “Like I said, a lot of it is just he’s been hampered by the injuries and just struggling a little bit to try to find his rhythm. But since he’s been back, since we shut him down for a few games, he’s been playing at a really high level. A couple games where he didn’t really score the ball well, but hopefully this is just another step in that growth into that role, and hopefully he keeps it going.”

Kuzma has dealt with two left ankle injuries this season and an eye injury that forced him to miss games. And at times he has struggled in his role coming off the bench. For the season, Kuzma is averaging 13.2 points in 24.3 minutes.

Vogel was asked if he has talked to Kuzma much to keep the young forward engaged.

Kuzma had another long-range shot at the end of a quarter Saturday. His three-pointer with 2.4 seconds left gave the Lakers a 73-49 halftime lead.

When the Lakers’ 32-point lead was trimmed to 11 in the fourth quarter, Kuzma stepped up again, scoring on an eight-foot shot and a three-pointer to seal the game.

Update: The Cavaliers have the fourth-worst record in the NBA at 12-27. They average 105.1 points, fifth fewest in the league. Collin Sexton leads them in scoring (18.7) and Tristan Thompson leads in rebounds (10.6).