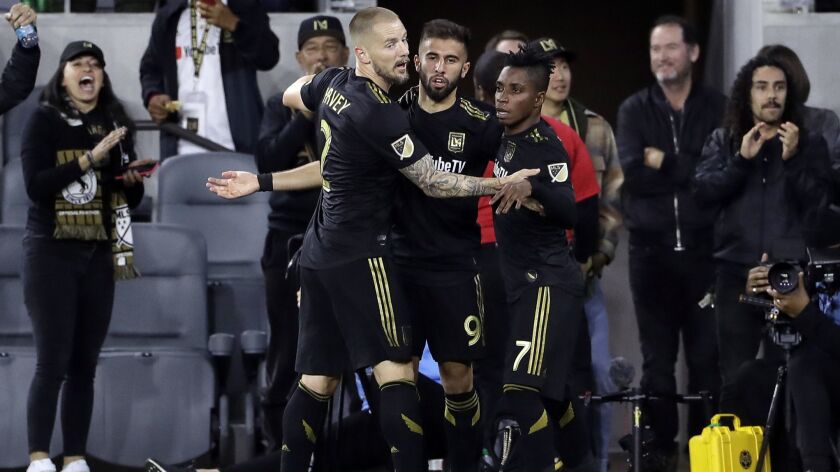 LAFC’s investment in South American talent is paying off

John Thorrington’s first goal as LAFC’s general manager is to build the best team possible. But if he had a second goal, he says it would be to make that team reflect the diverse community in which it plays.

Lately, however, LAFC has come to look more South American than Southern Californian. The roster Thorrington will take into his third preseason training camp Monday includes as many as six starters from the continent and for that he can thank two prolific scouts, changing philosophies within MLS and a budget that would be little more than pocket change for European giants such as Real Madrid, Barcelona or Manchester United.

Having a dedicated scout in a foreign market is a rare luxury for MLS teams, who generally rely on video, calls from agents and coaches, or word of mouth to find players. Having two scouts there has given LAFC a huge advantage in a market that has become increasingly important for MLS.

“We certainly have been very intentional about focusing in certain key markets in South America and we will continue to so,” Thorrington said.

LAFC’s path into South America was blazed, in large part, by Juan Pablo Angel, a former Colombian international who played six seasons in MLS, and Uruguayan scout Victor de los Santos. Angel, who remains a legend in Colombia, was hired as a technical consultant by LAFC and he has given the young club immediate credibility in South America. He is able to sell young players on a league they may not be familiar with, giving LAFC a formidable closer in contract talks.

“He was critical to the Ginella deal,” Thorrington said of acquiring Francisco Ginella, a 20-year-old Uruguayan midfielder who signed with the team last month. “It is certainly a powerful asset for us and we have reaped the benefit of that.”

De los Santos, who lives in Uruguay, is a more traditional scout, one with deep connections in the country’s soccer infrastructure. Together he and Angel identify potential LAFC recruits, and based in part on their recommendations, Thorrington decides which ones deserve a closer look.

“We get talking to the right people and we’re not going in blind. We build off the connectivity and the relationships already established through our staff there,” Thorrington said.

The rest of the league is making inroads as well. Last season there were 111 South Americans on opening-day rosters in MLS, nearly twice the number from five years earlier. Many are young playmakers, such as LAFC’s Diego Rossi and the Atlanta duo of Ezequiel Barco and Gonzalo “Pity” Martínez, who see MLS as the best route to big clubs in Europe.

“To go to Europe is like a dream,” Rossi said.

None are older than 22 and all six will be counted on during LAFC’s longest and most challenging season, one that begins in mid-February with CONCACAF Champions League games.

The presence of those players continues a transition that has seen MLS teams begin turning their back on aging, big-name European stars in favor of dynamic, if anonymous, South Americans.

“We have a super-knowledgeable fan base and our fans want to see good soccer. They’re not interested in the star power,” said Seattle Sounders general manager Garth Lagerwey, whose club won the MLS Cup last season with three South American players who were little known when they came to the league. “It allows us to spend efficiently. We can go get the best player we can afford for our money and then turn them loose.”

LAFC has learned the same lesson. Its six young South Americans will cost the team less than half what the Galaxy paid Zlatan Ibrahimovic last season. Scouting a particular region is more cost-effective than trying to scout the world.

“With limited resources relative to the global clubs that have 50-odd scouts, we just had to figure out what made sense for us,” Thorrington said. “We can’t do what Man United does.”

Instead, Thorrington said he’s guided by three questions: “How many people can you have, given your resources to acquire players? What markets make sense? Which types of players do we feel will adjust well to Los Angeles, to how we play? All of those variables go into consideration of where we should focus,” he said.

The rush into South America is already showing signs of slowing, though. New England Revolution coach Bruce Arena believes MLS clubs have become so focused on the region the market has become overpriced, an assessment with which Thorrington agrees.

“There has been an inflation,” he said. “And I don’t know whether that is a function of MLS or globally. Certainly we’re not the only league that goes to South America to recruit.”

With a team of scouts on the ground there, LAFC has found a way to stand out from the rest, and this season’s starting lineup proves that.