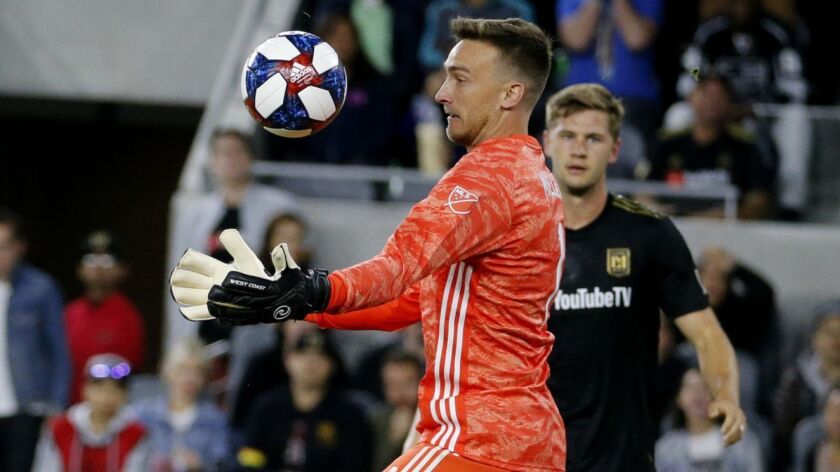 LAFC posted the best regular-season record in MLS history in 2019 and won the franchise’s first trophy by claiming the Supporters’ Shield. Yet the year ended in a loss to Seattle in the Western Conference final, and that leaves the team with some unfinished business to attend to when preseason training camp opens Monday at the team’s facility at Cal State L.A.

“The last feeling this group had was walking off the field against Seattle,” general manager John Thorrington said. “That will serve as great motivation. So I certainly have no concern about complacency.”

But there are other concerns because LAFC will open camp without seven starters from 2019 and, potentially, with a big hole in goal. Center back Walker Zimmerman is off with the U.S. national team, defender Eddie Segura and midfielder Eduard Atuesta are in camp with Colombia’s under-23 team and forward Diego Rossi is with Uruguay’s under-23 team.

They’ll all be back eventually. But the team has one key player to replace in midfield and could have holes to fill in goal and on the backline ahead of a crowded schedule that could stretch to more than 50 matches if the team goes far in the CONCACAF Champions League, U.S. Open Cup and MLS playoffs.

LAFC is starting camp a week earlier than most MLS teams, including the Galaxy, because it will begin play earlier, facing Mexican club León in the CONCACAF Champions League in mid-February.

“There’s a lot to put together,” said coach Bob Bradley, who led LAFC to a 21-4-9 record and an MLS-best 72 points last season. “We will use January to get ready to start Champions League, but we’ll also be working on finalizing a roster, which will include bringing in different players to look at.”

Bradley will likely take a long look at the goalkeeping situation. Tyler Miller, who won a Western Conference-best 34 games the last two seasons, remains unsigned and his future with the team has become shrouded in secrecy.

Miller, who earned just $77,565 last season — nearly $9,000 more than he made the year before — is seeking another increase. The team has refused to answer questions about whether he’ll be invited to camp, and Friday, the player was equally vague, saying, “I guess you’ll find out Monday.”

If Miller doesn’t show, Pablo Sisniega — who has six games of MLS experience — would battle Paulo Pita, the team’s first pick in the SuperDraft on Thursday, for the starting job.

Also missing is free-agent Steven Beitashour, whose 54 regular-season starts are the most by a defender in LAFC’s brief history, and midfielder Lee Nguyen, who was selected by Miami in the MLS expansion draft. But the core of LAFC’s attack, which tied the league record with 85 goals in 2019, is untouched.

Captain Carlos Vela, who broke the MLS scoring record with 34 goals last season, returns as does Rossi, whose 16 goals ranked fourth in the league, and midfielders Mark-Anthony Kaye, Latif Blessing and Atuesta.