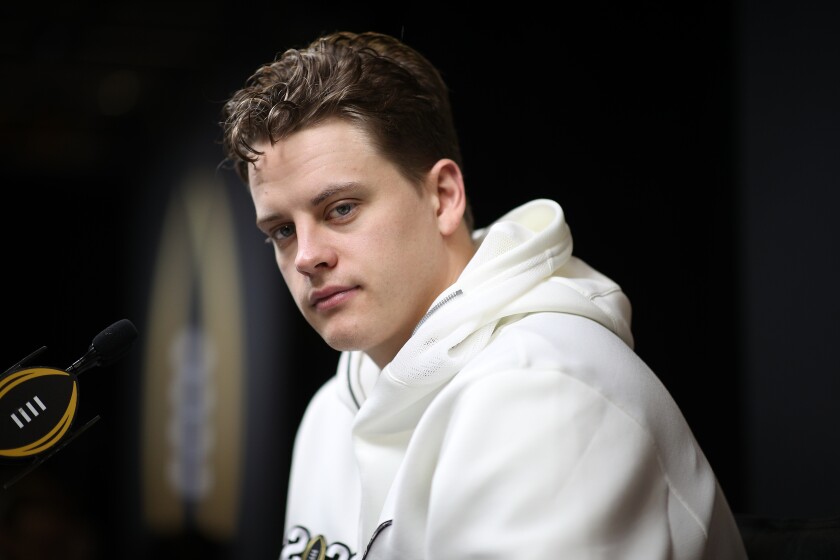 In the precious private moments before the Louisiana State Tigers run out of the tunnel Monday night, their two leaders will depend on the pregame rituals that got them here, four quarters from college football immortality in a place where legends never die.

The Heisman Trophy-winning quarterback has his routine, closing his eyes and visualizing how the beautiful game might unfold, how the defense might choose to attack him. This goes on for about 15 minutes.

“It’s kind of a nap,” Joe Burrow said. “I wouldn’t say I’m fully conscious. Whatever happens, happens. If I fall asleep, then I fall asleep.”

The national coach of the year, the protagonist of one of the sport’s most stirring underdog stories, has his own process.

“I get fired up,” Ed Orgeron said. “I drink a couple of Monsters and Red Bulls.”

Oh, the songs that will be written on the bayou if these two unlikely heroes come together for one more masterful performance and hand the defending national champion Clemson Tigers their first loss in the last two seasons. The first lines of Ed and Joe’s little ditty were scribbled over a crawfish dinner in Baton Rouge, where a hothead coach and a cool-hand quarterback first got to really know each other.

“We are one of the same from two different places,” Burrow said. “We have the same mentality: go run through someone’s face. He’s coached that way and played that way for a long time. That’s how I’ve always tried to play the game. This has kind of been a great match for us.”

Entering this season, you didn’t have to be a Louisianan or be able to understand Cajun French or know the difference between jambalaya and étouffée to know that LSU had a destiny to fulfill.

The Tigers have won three national championships — in the 1958, 2003 and 2007 seasons. Each time, they had the good fortune of aligning a transcendent run with a trip to New Orleans to validate it. Even in the 2011 season, LSU’s national title game loss to Alabama happened in the Superdome.

The four-year cycle was broken in 2015, but not too long after in 2016, Orgeron took over as coach for Les Miles. This year, the Larose, La., native restored the cosmic repetition with the help of a transfer quarterback from Athens, Ohio, who has the ability to recognize more than a coverage or blitz.

“We went into the season saying if the national title is in New Orleans, we weren’t going to let anybody else be there,” Burrow said. “We had to be there. We weren’t going to be at home on the couch watching two teams coming in our state and watching them on TV.”

Given the way the previous four years have gone in the College Football Playoff, Clemson was always going to be the most likely team to join whichever team won the Southeastern Conference in New Orleans. Dabo Swinney’s Tigers, 14-0 and winners of 29 in a row, are playing in their fourth CFP title game in five years.

That is such a staggering accomplishment that, to Swinney, a win over 14-0 LSU for a third national championship would be akin to a heaping helping of Cajun gravy.

“Regardless of what happens Monday night, this has been historic,” Swinney said. “Our program and even this team is not going to be defined by a scoreboard Monday night. Yeah, we win and we’ve won 30 in a row, and these guys went 15-0 back to back. But man, it’s been special.”

Swinney has pushed all the right buttons with his team’s motivation in 2019, somehow convincing a group that began the season No. 1 in both polls that it was not receiving proper respect. The Tigers fell to second in the rankings after nearly losing at North Carolina on Sept. 28, and, as LSU and Ohio State won bigger games in October, they dropped all the way to fourth. While Clemson’s ACC schedule did not provide any prove-it opportunities in November, Swinney dug in further on disrespect.

After beating Ohio State 29-23 in the Fiesta Bowl, Clemson is a 5½-point underdog to LSU, which of course did not go unnoticed by Swinney.

“It doesn’t really ever seem to matter,” Swinney said. “We’ll win 50 in a row, we’ll still be the underdog.”

A big part of that is the game’s location, which only adds to the sense that LSU’s run to the title is predestined. Maybe that’s why Swinney began Clemson’s media day Saturday with the reminder that what his Tigers have already done is impressive enough.

“This is definitely a road game,” Swinney said. “It just worked out that way. But I think it’s really cool for LSU. How cool is that, for them to be able to just hop on a bus and ride up the road 40 minutes or so? It would be like us playing for the national championship in Greenville [S.C.], literally.”

Swinney is setting up a scenario in which the pressure all rests on LSU, the team that hasn’t played for a CFP title and has had far more potential distractions surrounding it than Clemson.

The entire state has converged on the French Quarter. Classes at LSU have been canceled Monday and Tuesday. It’s as if Fat Tuesday arrived early.

“Louisiana is shut down. It’s on lock,” said LSU running back Clyde Edwards-Helaire, a Baton Rouge native. “It’s a sea of purple and gold. Ultimately for the rest of our lives, this is a memory that will never rust if we win this national championship.”

With all of that hanging in the Superdome air, how will Burrow ever find his calm?

There might not be enough energy drinks in New Orleans for Orgeron on Monday night.

“Just to show up at the hotel and see all the fans there,” Orgeron said, “just to hear them when we walk out here. ... When we left Baton Rouge, there were hundreds of people in front of the neighborhoods, and just seeing the little kids, understanding the magnitude of this football team and what it means to me and who we represent. … It’s everything.”