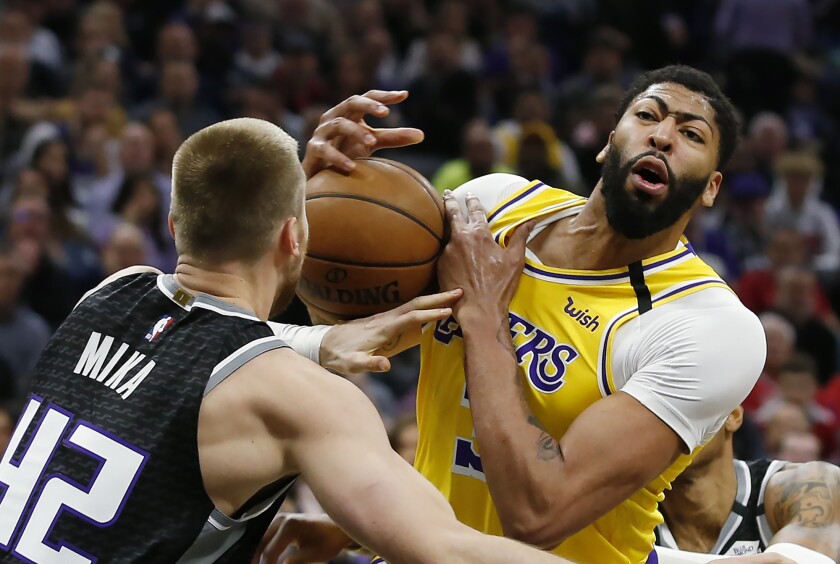 As Anthony Davis reminisced about his personal moments with Kobe Bryant, the Lakers forward smiled while telling a story from their time playing together in the 2012 Olympics in London.

Davis was a 19-year-old kid with future Hall of Famer teammates such as Bryant, LeBron James and Carmelo Anthony. The Team USA coach was Mike Krzyzewski.

Davis shared his story Friday night at Staples Center after the Lakers honored Bryant, his 13-year-old daughter, Gianna, and seven others who died in a helicopter crash in Calabasas last Sunday.

“We were playing Nigeria ... and we were winning by like 60 or something like that,” Davis said Friday night. “I finally got my chance to go in the game. I was just so happy to be around these guys, all these future Hall of Famers. I forgot to put my jersey on before the game. When Coach K called me to go into the game, I’m going up to the table and I’m about to take my warmup shirt off and I look down and it’s just a white T-shirt underneath.”

Embarrassed, Davis said he eased his way back to the bench for a little chat with Krzyzewski.

“I kind of whispered to him because I didn’t want these guys to hear me [say], ‘I forgot my jersey,’ and I go sit down. Kobe got on me like ... I can’t say what he said, but basically, ‘Why you not going in the game? It’s your chance.’ I said, ‘I don’t got my jersey on.’ There’s a picture where he’s kind of looking into my warmup. He said some more things after that. So now before every game, I kind of just check to make sure I have my jersey on. He told me how to get dressed before a game.”

On Saturday night against the Kings, one night after the Lakers had a touching and moving tribute to Bryant and the others who died in last Sunday’s crash, Sacramento did the same, showing clips that included some of the iconic games Bryant played against the Kings.

Davis scored 21 points on five-for-nine shooting in just 29 minutes 40 seconds. He also made all 10 of his free throws and was a plus-20 in the plus-minus department.

Clearly, Davis and his teammates were able to maintain their focus.

“It was different because we didn’t know what was coming,” Davis said. “We knew what to expect when the tribute videos and everything was coming last night. Not sure what their plan was, but they had some Kobe videos too. But we just tried to stay locked in and do what we could to get the win.”

The Lakers were not able to get the win against the Portland Trail Blazers on Friday night at Staples Center. Davis was outstanding in that game, producing 37 points, 15 rebounds and six assists in the loss.