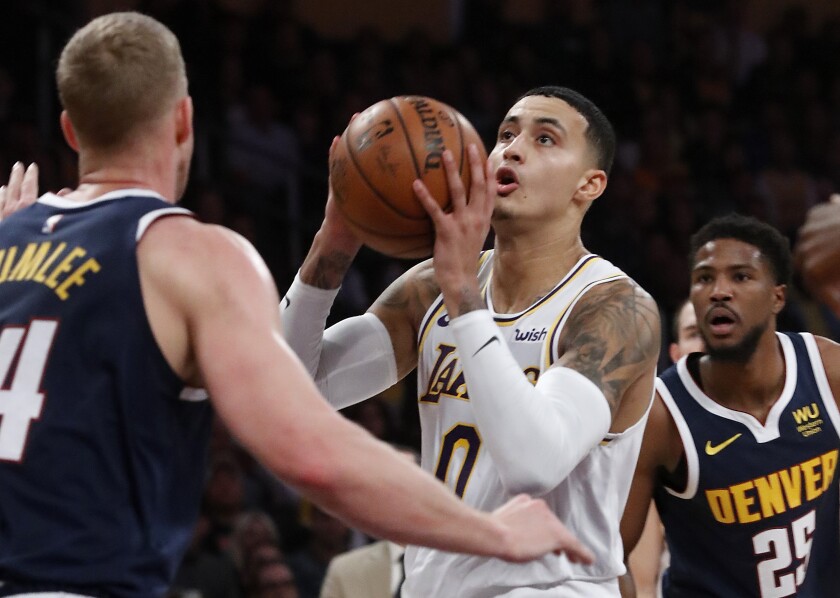 The Staples Center crowd welcomed Kyle Kuzma back with the familiar cheer: “Kuuuuz!” fans shouted as the Lakers forward checked into a game for the first time in two weeks.

Kuzma returned Sunday from a sprained ankle that kept him sidelined for the past five games, scoring 14 points with four rebounds and two assists in the Lakers’ 128-104 loss to the Denver Nuggets. Playing without an injured LeBron James, who sat out with a thoracic muscle strain, the team that talked of not losing two games in a row has now dropped three consecutive contests leading up to a big Christmas Day matchup with the Clippers on Wednesday.

Kuzma was gearing up for a possible breakout year after surviving a rash of offseason trades that jettisoned most of his former teammates out of L.A., but the third-year forward’s progression has been slowed by nagging injuries, including a stress reaction in his left foot that cost him the entire preseason. But after an extended break to recover from the left ankle injury originally suffered against the Washington Wizards on Nov. 29, Kuzma said Sunday he was feeling as healthy as he has all year.

Kuzma stayed loose during timeouts Sunday by jumping quickly back and forth over lines on the floor. While coach Frank Vogel said the defense lacked “juice,” Kuzma gave the team a lift off the bench with two blocks and a steal in the first half. He brought the crowd to its feet when he stepped into an open three-pointer in the third quarter, but perhaps showing some signs of offensive rust, the shot didn’t go down.

“Our team as a whole didn’t have great energy throughout the night, but Kyle plays extremely hard,” Vogel said. “It’s one of his strengths, but overall, we weren’t good enough to get the W tonight.”

Kuzma was injured during the summer with Team USA while practicing for the FIBA World Cup and didn’t make his season debut until Nov. 1. Later that month, a blow to the face caused a scary eye contusion that forced him to wear protective goggles briefly. Then the left ankle sprain further slowed his development after he tried to play through it for five games before taking time off to recover fully.

“He’s not comfortable right now, but it’s impossible for him to be comfortable,” Vogel said before the game. “He’s a young player with a whole new cast of teammates and a new coaching staff, a new system. So with younger guys, you know, it takes a little time sometimes, but he’s gonna be a huge, huge factor for us this year.”

The Lakers, who finished their road swing with losses to Indiana and Milwaukee, could have used Kuzma during the five-game trip. The team shot 25.8% from three-point range in the final three games against Atlanta, Indiana and Milwaukee and the bench was outscored 34-4 in the 111-104 loss to the Bucks, who staked their claim to the title of league’s best.

The Lakers’ Christmas Day matchup with the Clippers was thought to be another showdown between league powers but both teams limp into the blockbuster game. The Clippers have lost two of their past three. The Lakers have lost three in a row. Although the Lakers, who also lost the season opener to their in-town rival, have tried to downplay the significance of the game, Sunday’s latest defeat appears to just increase the team’s urgency for a perfect holiday performance.

“It should be fun,” Kuzma said with a smirk.