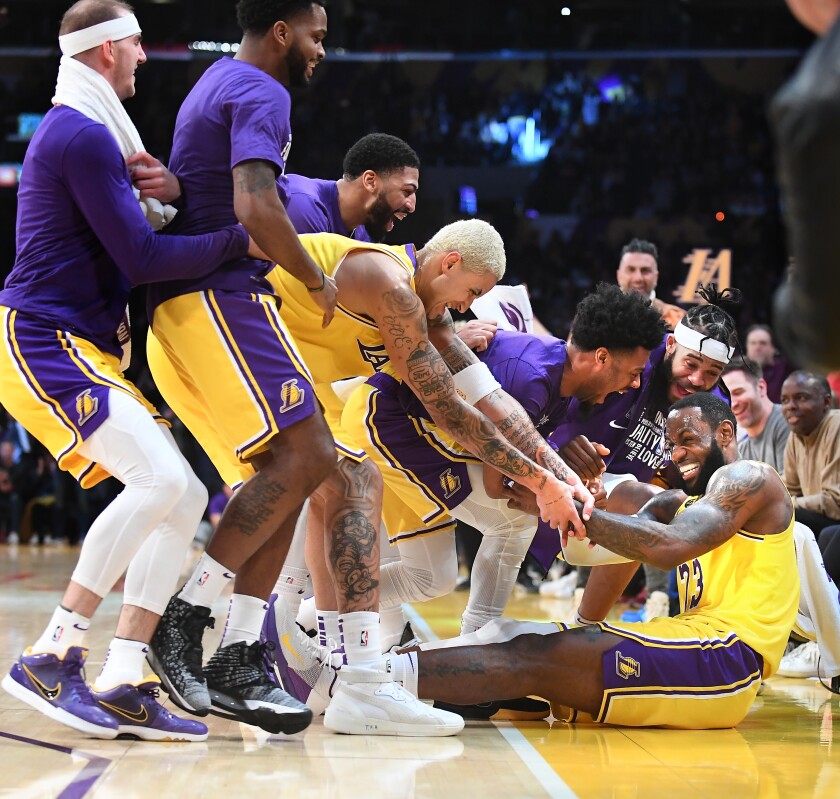 LeBron James had just hit his fifth three-pointer of the fourth quarter when San Antonio Spurs center Jakob Poeltl ran into him and knocked him to the ground. No whistle blew, and James held up his arms in disbelief as he sat in front of the courtside seats.

At a stoppage in play, his teammates rushed over from the Lakers’ bench to pick him up, and as they did so, the whole group dissolved into a mosh pit of laughter and hip bumps and shoulder slaps.

Normalcy returned to Staples Center in Tuesday night’s game between the Lakers and Spurs. The Lakers’ bench celebrated, their fans chanted “Taco Tuesday” at James, and their stars dominated with Lionel Richie sitting courtside.

James scored 36 points and led the Lakers to a commanding 129-102 victory. He finished six for nine on three-pointers overall and added nine assists and seven rebounds. The Lakers improved to 38-11, and the Spurs dropped to 22-28.

Even as things seemed to be getting back to normal, there were still reminders of the tragic loss the Lakers franchise experienced nine days before.

Outside the arena, signs requested that fans wishing to honor Kobe Bryant make donations to the Mamba Sports Foundation in lieu of leaving mementos or flowers.

Inside Staples Center, the fans chanted “Ko-be” with Anthony Davis at the foul line, and again with James shooting free throws, instead of chanting “M-V-P.”

And the decals honoring Bryant remained on the court. Bryant, his 13-year-old daughter, Gianna, and seven others died Jan. 26 in a helicopter crash in Calabasas.

In the game’s final seconds, the fans in the arena chanted “Ko-be” again, just as they had Friday night in the Lakers’ first game since Bryant’s death.

Davis and Kyle Kuzma each added 18 points, while Dwight Howard contributed a double-double with 12 points and 11 rebounds.