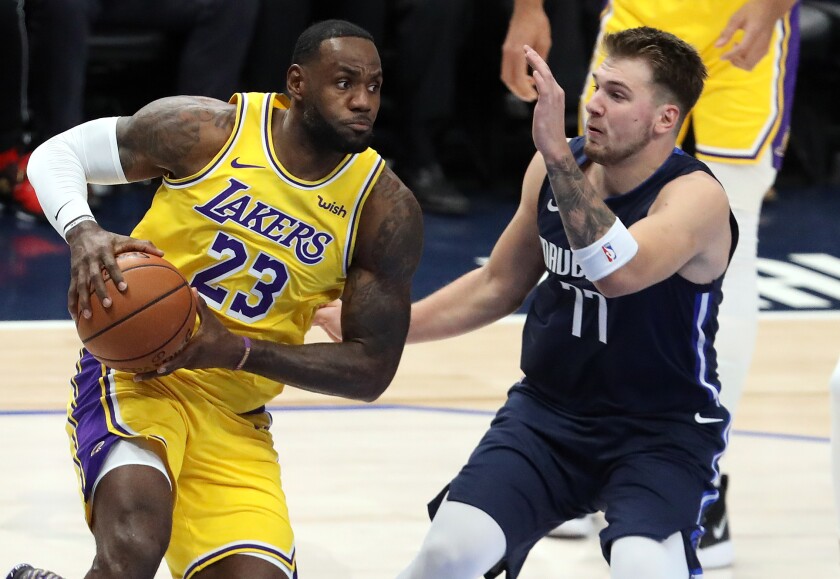 The seasoned bull and the young lion went toe-to-toe Friday night at American Airlines Center, the Lakers’ LeBron James and Dallas’ Luka Doncic giving the fans a show to remember.

But in the end, the 34-year-old James showed why he’s still the master, dominating in ways he has been known to do over his distinguished 17-year career, taking his game to another level with a dazzling triple-double, pulling the Lakers along with him for a 119-110 overtime victory over the 20-year-old Doncic and the Mavericks.

James produced 39 points, 12 rebounds and 16 assists, the sold-out crowd of 20,358 showing their appreciation with cheers.

“Offensively, we just couldn’t make a shot to start the game and I was getting great looks for my teammates and those shots just weren’t going down,” James said. “But the most important thing, we just continued to defend and that’s what’s always going to keep us in the game. So just for me I tried to be aggressive at certain points of the first half, seeing if my shot was going to go, seeing if I had a good hand and even with the first half and the struggles that we had, offensively was able to stay in the game because defensively we were still in tune.”

Doncic also produced a triple-double with 31 points, 13 rebounds and 15 assists, his hometown fans roaring their approval of the wunderkind.

According to NBA.com, James and Doncic become the youngest and oldest players in NBA history to put up 30 points, 10 rebounds and 10 assists.

When James and Doncic switched to defend each other on a few occasions, the fans seemed to enjoy the moments. They especially loved it when Doncic hit a step-back three-pointer over James in the first half.

“At the end of the day, for me it’s how can I help the team defensively throughout that one possession, and then offensively how can I get a great look either for myself or my teammate no matter the matchup, no matter who’s on me,” James said.

“Obviously, he’s a great young talent. I love his game, his ability to not only create shots for himself. But you guys know I love the fact that he can get great looks for his teammates. That’s what I thrive on, that’s what I’ve always believed in and he just plays the game the right way.”

With the Lakers down three points in the fourth quarter, James found Danny Green in the corner for a three-pointer that tied the score at 103 as time expired.

Once the game got to the overtime, James took over.

He scored nine points, grabbed two rebounds and handed out two assists in the final five minutes of the game.

“Nobody in the history of the game delivers the ball out to his shooters andscorers better than LeBron James,” Lakers coach Frank Vogel said. “When he’s scoring as well, he’s nearly impossible to beat. CreditDallas, they played a great game. But it wasn’t enough to slow him down to-night.”

James even had an authoritative dunk over Dorian Finney-Smith that made the crowd erupt with cheers and James’ teammates leap off the bench.

When the game was over, James and Doncic shared a hug at center court.

“You saw that look inhis eyes,” Vogel said about James. “He had it in the third quarter, really just changed the momentumof the game, put it in our favor. And then obviously late in the game, his ability to not only make big shots but quarterback the action out there.… He’s just special.”