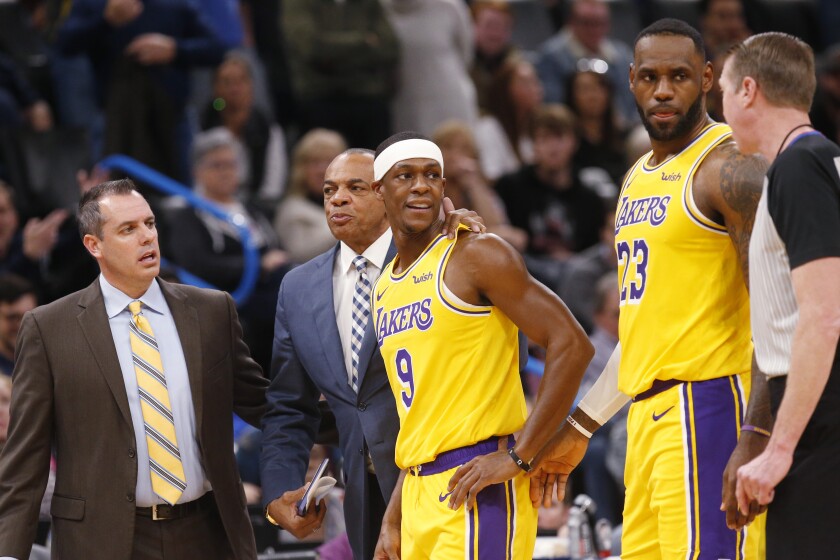 Lakers’ Rajon Rondo is fined $35,000 by NBA for altercation with Thunder’s Dennis Schroder

Lakers guard Rajon Rondo has been fined $35,000 for unsportsmanlike physical contact with Oklahoma City Thunder guard Dennis Schroder, inappropriate comments toward an official and a failure to leave the court in a timely fashion, the NBA said in a release.

In Rondo’s mind, the element that cost him the most is clear.

“Maybe the talk with the referee,” Rondo said Saturday before the Lakers game in Memphis. “I guess the same free speech doesn’t apply to everyone.”

Rondo was ejected during the Lakers’ victory over the Thunder on Friday night in Oklahoma City after two incidents that involved Schroder. He was assessed a technical foul for the first, then a flagrant 2 foul when he raised his leg into Schroder’s groin area.

Rondo said he is trying to get the first technical rescinded because he did not believe he was being abusive toward Schroder. He said he’d heard he was Schroder’s favorite player growing up and that Schroder used to watch film of Rondo playing.

“I was telling him respect your elders and respect your role models,” Rondo said. “Nowadays, that’s a tech. It is what it is.”

Rondo appeared to curse at referee Ed Malloy, who Rondo later said disrespected him by pointing in his face. Asked if he regrets what he said, Rondo said no.

Friday’s incident was not Rondo’s first brush with league disciplinarians. He has been fined several time for interactions with referees, including a 2015 incident in which he directed a homophobic slur at gay referee Bill Kennedy. Rondo apologized and received a one-game suspension. Last season, he was suspended for three games for his part in an on-court altercation with Chris Paul during the Lakers home opener against the Houston Rockets.

“You know, you’re a four-, five-time felon, the judgment is kind of harsher when you’ve had a history prior,” Rondo said Saturday.