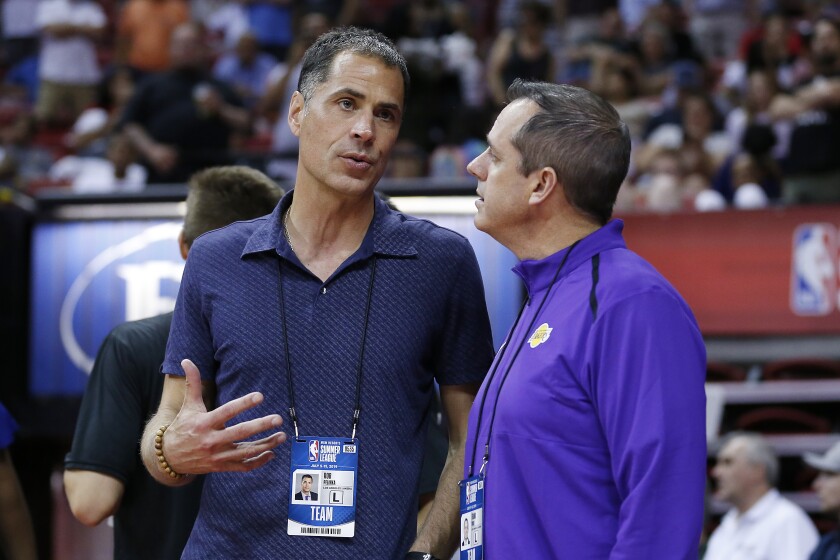 The Lakers have promoted general manager Rob Pelinka to vice president of basketball operations, the team announced Friday. He will remain the GM as well.

Pelinka, 50, joined the team as a first-time general manager in March 2017. People with knowledge of the promotion said Pelinka also received a contract extension.

Tim Harris, vice president of business operations, also received a contract extension. Terms of Harris’ and Pelinka’s extensions have not been disclosed.

“I’m extremely pleased with the work Rob has done in order to put this franchise in a position for success,” said Jeanie Buss, co-owner and chief executive of the Lakers. “His strong leadership skills, as well as his commitment to building a winning culture, both on and off the court, have brought us one step closer to being a championship-caliber team and I look forward to our continued work together.”

Pelinka helped rebuild the Lakers through the drafting of players he later used to acquire All-Star forward Anthony Davis in a trade last summer. He also brought in key veterans to pair with Davis and fellow All-Star forward LeBron James, who signed in 2018.

Can confirm the ESPN report that Pelinka was also given a contract extension in addition to his expanded title of vice president of basketball operations and general manager.

Buss, in her first interview since Johnson resigned, said then that she had confidence in Pelinka.

Under the stewardship of Pelinka, Johnson and the scouting department, the Lakers drafted Lonzo Ball, Kyle Kuzma and Josh Hart in 2017 to join Brandon Ingram, whom they selected second overall in 2016.

The Lakers traded Ball, Ingram and Hart along with several draft picks to New Orleans to acquire Davis. They were able to complete the deal without giving up Kuzma, then a second-year forward who averaged 18.6 points last season.

The team re-signed point guard Rajon Rondo, guard Kentavious Caldwell-Pope and center JaVale McGee while bringing back center Dwight Howard on a one-year contract to form the core of their veteran-laden team that includes guards Avery Bradley and Danny Green as well as forward Jared Dudley.

Tania Ganguli and Broderick Turner contributed to this report.