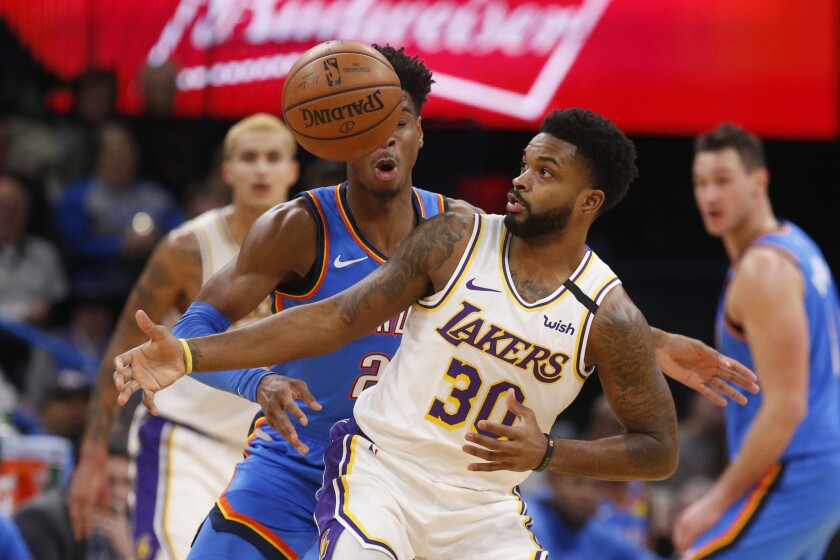 Lakers are a perplexing bet when the stars don’t play

Dealing with high-profile absences, the Lakers have befuddled betting markets heading into Monday night’s meeting with the Cleveland Cavaliers.

— The Lakers (+2.5) dominated Dallas 129-114 on the road Friday without Anthony Davis. The result was never in doubt after they led 45-27 at the end of the first quarter. LeBron James scored 35 points and Kyle Kuzma 26.

Teams are supposed to get worse when stars can’t play. The Lakers covered by 17.5 points without Davis, then by 24 in what could have been a no-show fatigue spot missing two superstars.

No, the Lakers aren’t better tired and shorthanded. But those results show how tricky it can be to project results when stars are not playing. Limited lineups may rise to the occasion, particularly if a great shooter gets more looks. Opponents may lose their intensity in anticipation of an easy win.

Oddsmakers and bettors greatly underestimated what the rest of the Lakers were capable of on the road. That’s something to remember when stars don’t play through the second half of the season. For now, be sure you monitor the markets and injury lists for home games Monday and Wednesday against Cleveland and Orlando, then for Saturday’s nationally televised road game in Houston (5:30 p.m., ABC).

— Markets also misread Saturday night’s USC-UCLA game. They were correct that the Trojans were the superior team. The Bruins closed laying -1.5 points, which is less than the standard value of home-court advantage in basketball. But USC topped that expectation by about a dozen points, 74-63.

Some may be wondering if the market typically reduces its standard three points for home-court advantage in crosstown rivalry college games because no travel is involved. The short answer is no. Such matchups are common in major cities, creating a large sample size to study. Quick example: Last season, UCLA was -4.5 at home but +2 at USC. That differential of 6.5 points is fractionally higher than three points per site.

Recreational bettors who don’t read box scores should be aware that Saturday’s game was played at a very slow pace — just 63 possessions per team. A shaky UCLA defense allowed 74 points because it let USC shoot 61% on two-pointers, 50% on three-pointers.

USC’s win has it threatening the top 70 in Ken Pomeroy’s market-respected computer rankings (kenpom.com). UCLA fell out of the top 130 and needs to improve quickly to garner even NIT consideration.

The L.A. schools will host the Pac 12’s “No-Cal” schools this week. UCLA plays Stanford on Wednesday, then California on Sunday. USC sees them in reverse order Thursday and Saturday.

— As the college and NFL postseasons wind down, the upstart XFL is set to begin in less than a month. Caesars Entertainment was the first sportsbook in Nevada to post futures prices to win the title in the eight-team league. The Los Angeles Wildcats aren’t among the early favorites, sitting midpack at +600 (risk $100 to win $600, or anything in that ratio).

The Wildcats open their season Feb, 8 at Houston (2 p.m., Fox). Caesars odds suggest Houston will be a slight home favorite.