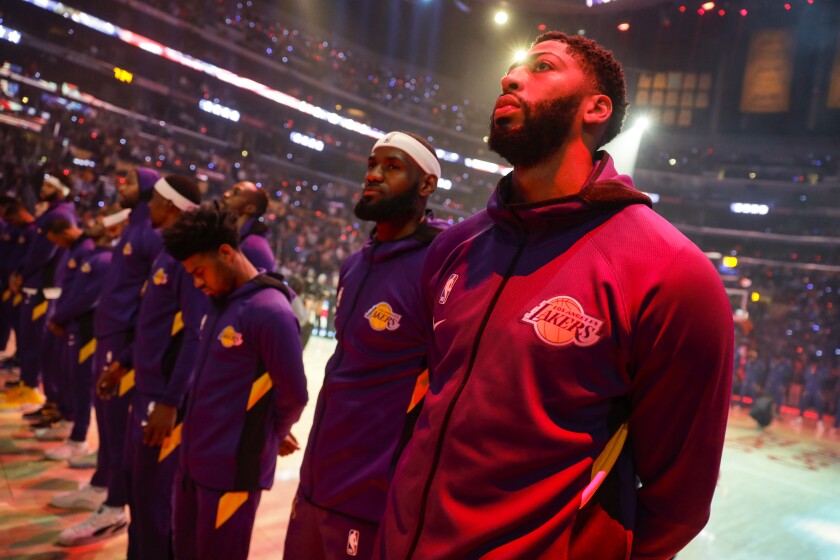 They were a group of five that started together for the second time this exhibition season, a cohesive quintet that left many wondering if they will be the opening-night starting lineup Tuesday night at Staples Center against the Clippers.

When the question was posed Wednesday after it was announced that LeBron James, Anthony Davis, JaVale McGee, Avery Bradley and Danny Green were starting against the Golden State Warriors, Lakers coach Frank Vogel was coy.

Since that same group had started in the Lakers’ first exhibition against the Warriors this month and won, it was a natural question to ask Vogel if he had settled on them as his starters.

“Still tinkering,” Vogel said before the Lakers’ 126-93 victory at Staples Center. “I haven’t made any decisions about what the starting lineup will looklike on opening night. Thisis definitely one way we could go.”

James seemed fine with it. “It was a great defensive lineup to start the game,” he said. “Guys were helping each other on the offensive end. It’s my job to put guys in position to push the pace and get guys open looks,get AD the ball where he wants it.”

The plan, Vogel said before the game, was to push James and Davis “over 30 minutes” against the Warriors so the dynamic duo can “get some good run.”

With the scoring so lopsided, James and Davis didn’t quite reach the 30-minute mark.

Davis played 27:51 total. He had only eight points on three-for-nine shooting, but he had 10 rebounds, eightassists and two blocked shots.

Davis had been dealing with a sprained right thumb, an injury he suffered in China on Saturday against the Brooklyn Nets.

“It’s just making the right plays,” Davis said. “I always want to get my teammates better, get them open shots, knowing that I can draw a double team as well. Tonight it was just finding the right guy. Guys were in the right spot at the right time, just trying to get them involved.”

Bradley also had 18 points, going seven for nine from the field and four for five from three-point range. Green had eight points and McGee had 12 points and six rebounds.

Rajon Rondo didn’t play because of rest, but Quinn Cook played in his firstexhibition game after recovering from a sore left calf and finished with 16 points, making four three-pointers.