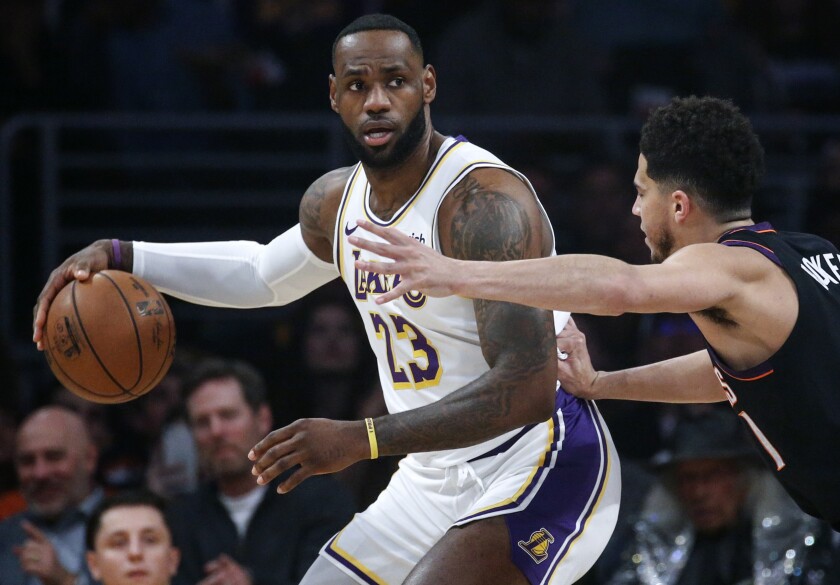 Lakers dominate in first half, sputter in second half during win over Suns

Early in the first quarter, the Lakers displayed the full power of their might.

First, LeBron James lobbed the ball to Anthony Davis, who caught it with his back to the basket and finished the play with a reverse dunk. Then, James poked the ball away from the Suns’ Jevon Carter, took it the length of the court and delivered another powerful dunk.

It was an early sign that seemed to indicate this would be an easy night for the Lakers. In the end, it wasn’t. On Wednesday night the Phoenix Suns were completely outmatched by the Lakers for one half. In the second half, though, the Suns (13-21) made the Lakers (27-7) work hard to eke out a 117-107 win.

James notched a triple double with 31 points, 12 assists and 13 rebounds, while Davis scored 26 points, 15 of them in the first quarter. Kyle Kuzma added 19 points on five-of-15 shooting while Avery Bradley scored 18 points, making nine of the 11 shots he attempted.

In that first quarter, the Lakers scored 43 points, which made it the highest scoring quarter the Lakers have had all season. But it wasn’t just on offense that the Lakers overpowered the Suns. The Suns turned over the ball seven times in the first quarter, five of them steals by the Lakers. And while the Lakers made 70.4% of their first-quarter shots, they held the Suns to just 26.1% shooting.

By halftime things didn’t get much better for the Suns. They committed another five turnovers in the second quarter.

After halftime, the Lakers increased their lead to 36 with a 20-footer from James, which was their largest lead of the game.

That’s when the Suns fired back.

Phoenix shot 60.9% in the third quarter and only committed one turnover. They outscored the Lakers in the paint and on second-chance points during that frame. James’ five field goals in the third were more than the rest of his team had combined.

In the fourth quarter, their shooting went cold. The Lakers scored only eight points in the first eight minutes of the fourth, going 1-for-16 from the field. Now it was Phoenix getting into the Lakers’ passing lanes, and taking advantage of their misses. In all the Lakers went 12-of-39 in the second half.

With 8:11 left in the game and the Lakers’ lead cut to 12, James, Davis and Kuzma returned. James and Davis stayed in until almost the end as the Lakers held on to deny the Suns a third straight win.