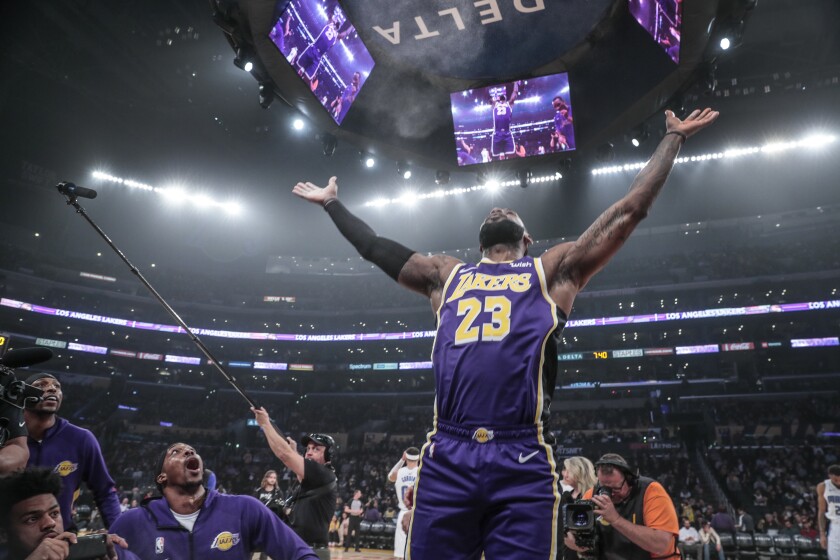 Lakers have also been doing well against the spread lately

NBA fans in the Northeast get their only regular-season in-person look at LeBron James and the Lakers this week: Monday in Boston, Wednesday in New York, Thursday in Brooklyn and Saturday in Philadelphia.

It’s quite a dilemma for local fans who paid big money to see him play. They want to see their local team do well, but should they risk betting against him?

A helpful tip for fans and bettors in the Lakers-Rockets game was provided on game day by VSiN’s Jonathan Von Tobel, on “The Lombardi Line.” He noted league rankings show “the Lakers take the most shots at the rim, and they are the best shooting team within four feet.” They shot 74.3% in close against Houston’s notoriously soft inside defense. Analysts should expect such dominance to continue against opponents ill equipped to deal with the Lakers’ aggressive, physical onslaught.

The Lakers entered the week with the best record in the Western Conference and a 4½-game cushion over the Clippers before losing to Boston on Monday night. Of course, clinching home-court advantage in a playoff series between the two is irrelevant because they share Staples Center. Both are still virtual co-favorites to win the conference on futures boards partly because of that quirk.

The Clippers have won five of their last six straight up but are just 2-5 ATS in their last seven against inflated point spreads. They rallied to win, but not cover, Saturday at New Orleans 133-130 as seven-point favorites. A winter tour of Sun Belt states continues Tuesday at Dallas, Wednesday at Atlanta, Friday at Miami and Sunday at Orlando.

— USC was part of one of the luckiest covers of the year or one of the worst beats of the year Saturday against Stanford. The Trojans (-3.5) were down 21 points early in the second half and five points with 11 seconds left before forcing overtime and stealing an 82-78 victory. Highway robbery for bettors backing the Cardinal. Found money for Trojans investors.

The cover was the third straight for USC, since a humiliating 72-40 loss at Washington.

— UCLA bounced back from a 74-59 home loss to Stanford as a one-point favorite with a 50-40 win Sunday over lowly California as a nine-point favorite. The Bruins are still just 2-7 ATS in their last nine games.

UCLA and USC will be challenged this week when visiting the Pac-12’s Oregon schools.

— In the NHL, the Kings and the Ducks have already started their expanded All-Star breaks. The game is Saturday in St. Louis.

The Kings closed their first half 1-6-1 straight up in their last eight games. Backers are down just over nine units for the season against game-day moneylines, according to covers.com, but down just under three units against the puck line (getting or laying 1.5 goals at adjusted prices).

The Ducks should carry more optimism into the second half after pulling shocking road upsets at Nashville, winning 4-2 as +165 underdogs, and at Carolina, winning 2-1 in OT at +185. But even with those big moneymakers, Ducks backers are down about 7½ units against money lines and about five units against the puck line.