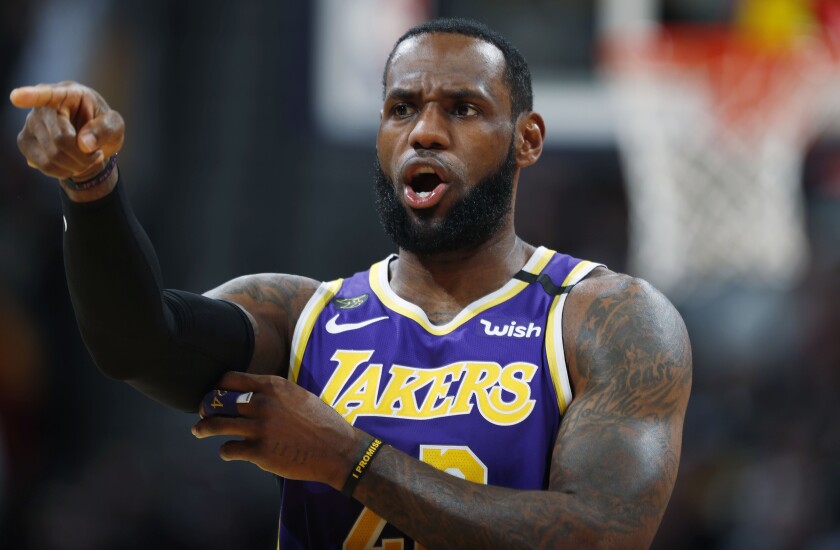 With the NBA’s version of spring break looming, the Lakers had one more punch in them.

They beat the Denver Nuggets 120-116 and held off the second-best team in the west, behind only the Lakers. The win gave the Lakers (41-12) a four-game lead over the Nuggets (38-17) heading into the NBA All-Star break.

LeBron James scored 32 points and notched at triple double, while Nuggets guard Jamal Murray led Denver with 32 points as well. Anthony Davis had 33 points, including two threes in overtime. Kentavious Caldwell-Pope contributed nine points and four steals, including one in overtime to ensure the Lakers’ win.

Nuggets center Nikola Jokic scored 15 points in the first half, but only seven in the second.

The Lakers placed an emphasis heading into the game on staying focused at a time when many of them had vacation plans already scheduled for the next few days.

They quickly locked in to start the game, taking an early lead over the Nuggets before Denver pushed back.

The Lakers trailed by 13 in the second quarter with a three-pointer from Monte Morris. They struggled to contain Nikola Jokic and the Nuggets bench, which at the time had outscored the Lakers bench 20-10. The Lakers needed a way to get LeBron James some rest, and did so at the ensuing timeout. Without James, the Lakers fought their way back.

They went on a 13-2 run before James returned to the game and helped complete the comeback. The Lakers first lead since early in the first quarter came when James hit a jumper to make the score 53-51.

The Lakers held a six-point lead at halftime, that grew as the third quarter opened. But Denver showed just why they are one of the league’s top teams, fighting back to tie the game at 66 with a three from Jokic.

Both teams played to the raucous crowd. They traded flexes and threes. When James broke away for a dunk early in the fourth quarter, the crowd rose in anticipation for what followed.

Late in the fourth quarter, Davis got his hands on a ball as Jokic was trying to shoot. Jokic eventually got the ball up and in, but by that point an official had already called a jump ball, which the Lakers won. As they sprinted down the court on the break, the Nuggets guards followed closely and Morris fouled Alex Caruso before he could shoot.

With 3 minutes 40 seconds remaining in the game, a fan threw a hat onto the court. James kicked it off the court so play could resume. Moments later, Davis blocked Jokic from behind, then drew a foul on Jokic as he grabbed the ball. His free throws tied the game at 103.

The Lakers had a four-point lead with 1:14 left in the game, but Denver closed the gap.

Overtime was evenly matched for a time too, but once the Lakers took a 119-116 lead, the Nuggets struggled to score. Finally, Jokic tried to swing the ball to a teammate outside the three-point arc. It never got to its target. Instead, Caldwell-Pope grabbed the ball and sealed the win for the Lakers.