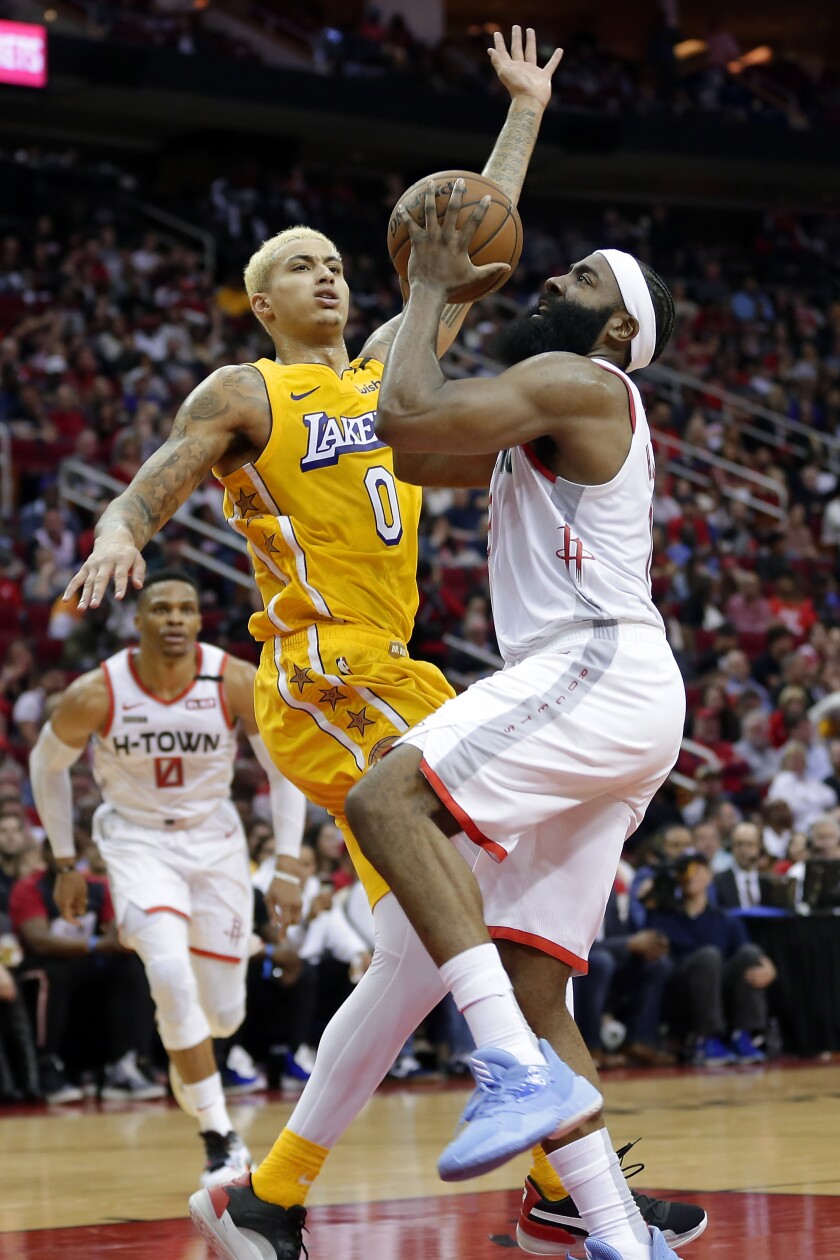 At halftime of Saturday’s game in Houston, the Lakers needed to figure something out defensively. Russell Westbrook was becoming too much of a problem, and the Lakers were sending the Rockets stars to the free-throw line far too frequently. They needed a bigger body on him, someone who could handle his physicality.

So Rajon Rondo pulled Kyle Kuzma aside and asked if he could do it.

“Of course,” Kuzma told him.

He’s never been short on confidence, whether that’s on the offensive or defensive side of the ball. But now in his third NBA season, Kuzma has tried to improve a little bit more defensively each year. A player who was once talked about as only an offensive threat, proved Saturday that he can be more than that for the Lakers when asked. And he isn’t afraid to share that the journey has been tough and is ongoing.

“People think it’s an easy thing to do, playing against the best players in the world, but just done a good job of my past three years of just getting better every year,” Kuzma said. “Especially coming into the league as a young player, everybody expects you to be perfect and straight A at everything, but that’s not the case. For me, that’s what I want to do every game, to come out and prove myself defensively. It’s hard to shake narratives. People say I don’t play defense, but I know what I’m doing.”

It wasn’t just Kuzma’s individual defense on Westbrook that served his team Saturday. His offensive contributions became more potent in the second half and especially the fourth quarter, when Kuzma scored 10 points. But his defensive intensity proved solid throughout the game.

“Just containment,” Lakers coach Frank Vogel said. “He works really hard on that end of the floor and we were, not only individually on Russell, but we were in rotations a lot tonight. Far more than I’m comfortable with, personally, but he’s got length and athleticism to compete in those situations and he did a great job of it tonight.”

Being a successful defensive player isn’t just about handling individual matchups. Kuzma, like many young players, had to learn what it took to play strong team defense. He had to understand opposing offenses and learn to trust his teammates.

James’ comments were relayed to Kuzma on Saturday night. What James has noticed about him, Kuzma said is a sign of how he’s grown.

“It’s part of just maturing and just getting to that next step, or getting over a certain plateau,” Kuzma said. “Any time you accept challenges or face adversity, it bodes well for yourself, no matter if you successfully do it, or you fail, it’s always a lesson.”

Anthony Davis did not work out Sunday morning before the Lakers traveled from Houston to Boston. Davis remains questionable on the Lakers injury report for Monday’s game against the Celtics.

He has missed five games with what the Lakers have called a bruised gluteus maximus. The Lakers initially diagnosed Davis with a sacral contusion, which is a bone bruise near his tailbone, but updated the diagnosis to a less serious soft tissue bruise after he had an MRI later that evening.

The Lakers also listed Rondo as questionable. He has missed a week with an avulsion fracture in his right ring finger.