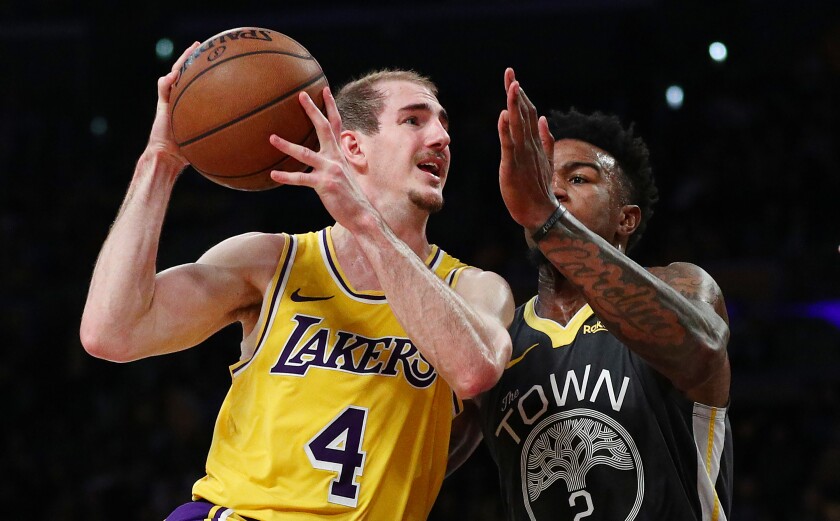 In the last week, the Lakers experienced two injury scares that turned out OK and another round of illnesses and caused a stir with a contractual move that was more incendiary in name than in practice.

We’ll get through all that below.

Let’s start by discussing an All-Star phenomenon that’s growing in strength. That would be fan voting for Alex Caruso.

Caruso’s story is one that gives hope to NBA players on the fringes of the league. He started in the G League, then earned a two-way deal with a stellar performance in the Summer League and is now an important role player on a team that could win a championship. He captured the imagination of basketball fans across the nation. The first manifestation came in the form of memes. Now, we have All-Star Voting.

Fans contribute 50% of the vote when it comes to deciding starters, and while it’s still unlikely that Caruso will finish in the top two, he has rocketed up the rankings. Caruso was eighth in the first returns and is now sixth. That puts him ahead of young stars Devin Booker, D’Angelo Russell, Ja Morant and Donovan Mitchell in fan voting. In fact, he has twice as many votes as Memphis’s Morant.

To some, Caruso’s rise is an amusing thing, and he’s been very gracious about the attention he receives. But much of the attention isn’t about his ability, which is something that gets overlooked. It shouldn’t surprise people when he flies in for an acrobatic dunk anymore. It shouldn’t be a shock when he’s able to lock down talented offensive players. Caruso earned his way onto the Lakers’ roster and earned the respect of his teammates because of the way he plays. That shouldn’t get lost.

Trade season is upon us

Last year, the Toronto Raptors took a big swing at the trade deadline, acquiring Marc Gasol from the Grizzlies for Jonas Valanciunas, Delon Wright, CJ Miles and a future second-round pick. Sometimes that’s what it takes to win a championship.

What the Raptors knew then was that they might only have one season with Kawhi Leonard and they needed to pounce on the opportunity before them. It worked. The Raptors won the championship and then their window closed as Leonard left for the Clippers.

That lesson is one the Lakers understand well even though they have a storied championship history. Six seasons without making the playoffs and 10 without a title can have a humbling effect.

They know the chance to win a championship doesn’t happen often and shouldn’t be taken for granted. So far, with a record of 30-7, they’ve shown the ability to beat almost any team in the league. They have yet to beat their two biggest threats in their quest to win the Larry O’Brien Trophy — the Milwaukee Bucks and the Clippers. So there is room for improvement.

That’s why Lakers general manager Rob Pelinka is prepared to trade anyone on the roster, except Davis and LeBron James, if it means filling a gap the Lakers need in order to win a championship, according to a person familiar with his thinking.

The reporting league-wide has centered around Kyle Kuzma, who is one of the Lakers’ most tradeable talents. Pelinka has had conversations with more than one team in which Kuzma was discussed, according to people familiar with those talks. He’s a good young player who has shown a great deal of promise and who has a team-friendly contract.

But the broader picture to take away from this is that the Lakers are looking for ways to improve and aren’t afraid to do what it would take to get there.

Since last we spoke…