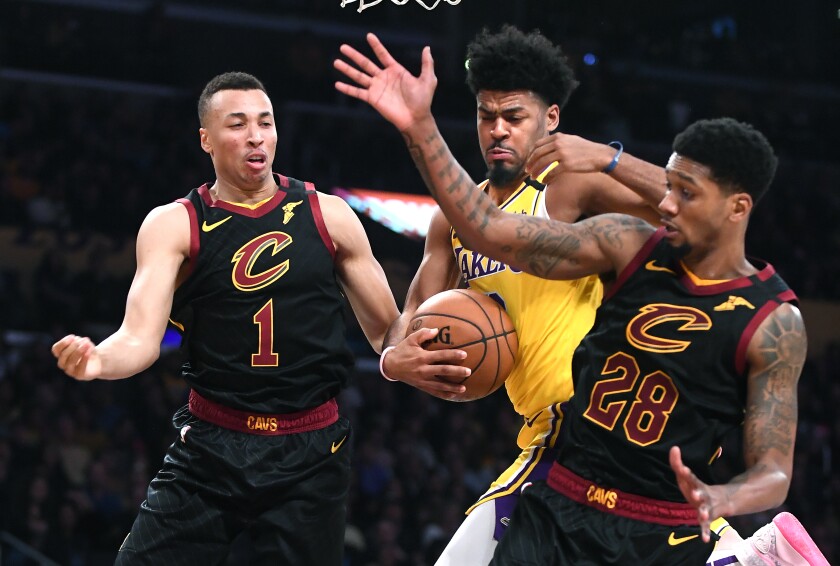 It wasn’t the most meaningful shot of the night, but in some ways it was. Dwight Howard hit a three-pointer and the Staples Center crowd erupted in euphoria. He left the game not long after that — what more could he do?

Howard finished with season highs of 21 points and 15 rebounds in the Lakers’ 128-99 win over the Cleveland Cavaliers. The win, despite a lackluster start, ensured the Lakers continued their undefeated streak against teams with losing records. They have now improved to 33-7, while the Cavaliers fell to 12-28.

LeBron James scored 31 points on 12-for-16 shooting with eight assists, and the game was well in hand against his former team when he exited.

“With [Anthony Davis] out, we’re missing 27 or 25 points a game,” James said. “Everyone has to chip in offensively. I’m not saying to cover that because you can’t cover what he does. Just try to step up your game a little bit more too. That’s basically what it is from all of us not just myself.”

The Lakers got some bad news heading into the game. Davis missed Monday’s game, making it the third consecutive game he’d missed after suffering a bruised buttocks against the New York Knicks on Jan. 7.

They also lacked Rajon Rondo, who was given an MRI exam on Monday that revealed a non-displaced volar plate avulsion fracture on his right ring finger. The injury is sometimes referred to as a jammed finger. Last year, Rondo had two surgeries on his right hand, one of which was on his ring finger.

The Lakers played in Dallas on Friday and Oklahoma City on Saturday, winning both games despite not having Davis for either. The next day, Davis and Rondo were among a group of players who went to Green Bay for the Packers’ playoff game against the Seattle Seahawks. Davis, though a Chicago native, is a longtime Packers fan.

“They mentioned it to [general manager] Rob [Pelinka], Rob mentioned it to me and it’s an off day and it’s something that we endorse,” Lakers coach Frank Vogel said of their trip. Vogel also said the Lakers’ medical team did not take issue with the players attending the game.

It was a more complete starting lineup than the Lakers had against the Thunder, when Davis, James and Green missed the game. On Monday against Cleveland, the Lakers had all their regular starters except Davis, for whom Kuzma started.

They faced an overmatched but spunky Cavaliers team.

Cleveland took advantage of a sluggish start by the Lakers to take a 10-point lead in the first. They led by only six at the end of the period, because of another buzzer-beater by Kuzma. The 21-foot jumper was Kuzma’s only make of seven shot attempts in the first quarter.

The second quarter wasn’t kinder to the Lakers and the Cavaliers extended their lead to 14. Back-to-back scores from Jared Dudley cut the lead to seven.

By halftime the Lakers had cut their deficit to one. At that point, no Laker had scored in double digits, though Howard had eight points and nine rebounds. Kevin Love scored 12 first-half points while Tristan Thompson added 13 for the Cavaliers, two of which he followed with a little stare-down and some trash talk for James.

“I think we just came out a little sluggish. ... a tough road trip, coming back versus a lesser opponent with their record, and we just kind of came out sluggish,” Kuzma said. “But good teams find a way to figure out how to win, and we started out the second half great.”

Their energy changed after the break. Led by James, they scored 37 points, with James making all four shots he attempted and scoring nine points. Overall, the Lakers made 63.6% of their third-quarter shots. They also outscored the Cavaliers on fast breaks 13-0. They had zero fast-break points in the first quarter.

Cleveland, meanwhile, committed seven turnovers in the third quarter, as they dug themselves into an insurmountable hole.

“Defensively we got stops and we had great pace,” said James, who passed Isiah Thomas for eighth on the all-time assists list. “Even when they scored we just got the ball out, continued to play with a lot of pace. Allows us to get into our offense and … we’re playing with a lot of balance and were able to connect with some field goals.”