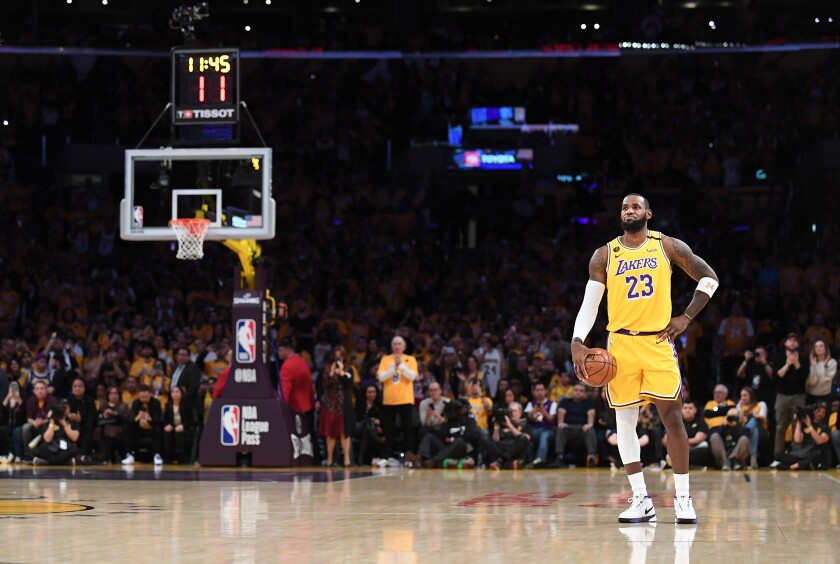 The lights had been dimmed for a while. Usher sang “Amazing Grace” as the video board began to show images of players throughout the NBA crying as they played the games they were forced to endure during the past week.

Not far from where he sang, Rob Pelinka, the Lakers general manager, who considered Kobe Bryant his best friend, put his hand over his eyes and bowed his head.

Friday’s game was one of public release for the Lakers. They celebrated and cried openly for Bryant. They clung to each other as they had in the previous week.

After Boyz II Men sang the national anthem, a tearful LeBron James turned toward Anthony Davis and they both held each other. Davis’ eyes were still red when he came through pregame introductions and was introduced as “No. 24, 6-6, 20th year out of Lower Merion High School, Kobeeee Bryant.”

That the Lakers lost 127-119 to the Portland Trail Blazers was almost an afterthought. Damian Lillard, who played against Bryant in his first NBA game, scored 48 points, and Anthony Davis had 37, making 14 of 22 shots.

But the night belonged to Bryant.

“I know at some point, we will have a memorial for Kobe,” LeBron James said as he addressed the crowd. “But I look at this, I look at this as a celebration tonight. This is a celebration of the 20 years of the blood, the sweat, the tears, the broken-down body, the getting up, the sitting down, the everything. The countless hours, the determination to be as great as he could be. Tonight, we celebrate the kid that came here at 18 years of age, retired at 38 and became probably the best dad we’ve seen over the past three years, man.”

Bryant died in a helicopter crash Sunday, along with his 13-year-old daughter, Gianna, and seven other close friends. Their names — John Altobelli, Keri Altobelli, Alyssa Altobelli, Christina Mauser, Sarah Chester, Payton Chester and Ara Zobayan — were shown on digital screens throughout the arena before and during the game.

Two seats remained empty throughout the game, save for two bouquets of red roses. One had a Mamba Academy jersey worn by Gianna Bryant on it, and the other Kobe Bryant’s Lakers 24.

Every player wore a Bryant jersey over their warmups before the game, many of them wore versions of the same shirt fans received at other points in the day. Everything they wore had a decal on them — a black circle with the letters: “KB.”

The coaching staff all wore Bryant’s signature Nike shoes. Most of the players did, too, even Rajon Rondo, who has a sponsorship with another shoe company.

When public address announcer Lawrence Tanter introduce the Lakers lineup, he introduced every single player as the No. 24 from Lower Merion High School.

When James did his pregame chalk toss, he pointed toward the heavens as the dust settled around him.

Before the game, Frank Vogel and Terry Stotts had met in the hallway to confirm that one would take a 24-second shot clock violation to start the game and the other an 8-second backcourt violation, as teams around the league had done in their first games since Bryant’s sudden death.

So when JaVale McGee tapped the opening tip to James, James crossed midcourt and stopped. Fans stood up and cheered until Tanter announced the 24-second violation. Portland then took its agreed upon violation.

At halftime Charlie Puth and Wiz Khalifa sang “See You Again,” with Khalifa mentioning Bryant near the end of the song.

With 2:09 left in the game, the crowd began to chant “Kobe” once again. They didn’t the result they wanted. LeBron James shot a three-pointer with about 1:15 left in the game that hit the rim and fell out of bounds. The Lakers trailed by eight with 52 seconds remaining, but most of the fans stayed. Even when that deficit grew to 10, they stayed.

The Trail Blazers took a 24-second shot clock violation with two seconds remaining in the game, and as they did so, with the game’s result decided, fans began a somber chant.