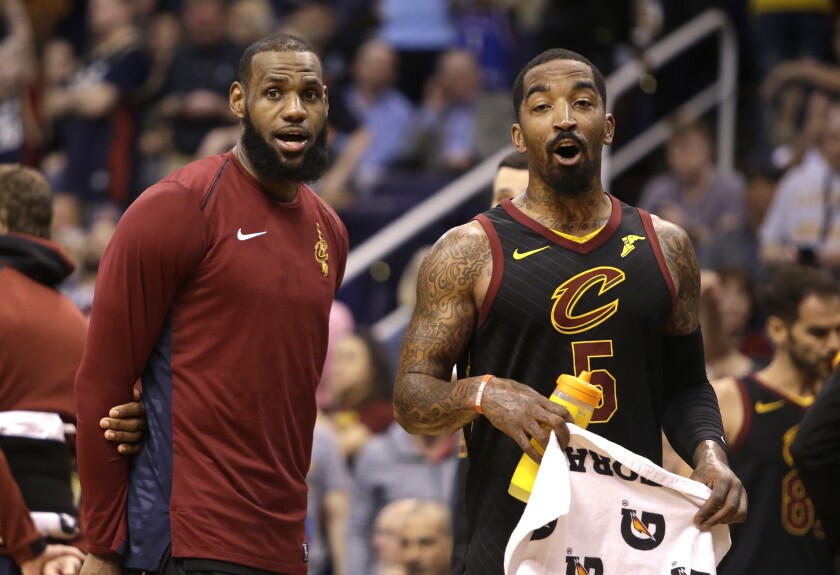 The Lakers are working to sign guard JR Smith for the rest of the season, according to people familiar with the situation, which would reunite LeBron James with his former Cleveland teammate as the Lakers head to Florida for the resumption of the NBA season.

Smith, 34, will be added to replace Avery Bradley, who decided to not join the team in Florida because of family reasons. Once Bradley is officially listed as a player who opted out of the league’s resumption, the team can add Smith as a replacement player — no earlier than 9 a.m. on July 1.

In order to be able to join the team, replacement players must follow a protocol to ensure their ability to safely join a team at the secluded ESPN Wide World of Sports campus next month.

According to the league’s health and safety manual, any player signed to a contract after June 23 has to complete a questionnaire about his medical history, be examined by team doctors who will review whether or not he is at risk of complications because of COVID-19 and undergo COVID-19 testing that follows the same protocol the rest of the team had to follow. Lakers players were administered drive-up tests for both the virus and its antibodies on June 23.

Lakers will open NBA restart against rival Clippers on July 30

Lakers will open NBA restart against rival Clippers on July 30

The Lakers’ first NBA restart game will be against the team many expect them to compete with for a chance to reach the Finals — the Clippers.

Teams have until July 1 to finalize their rosters and travel party, which can include 35 people, for the league’s return to play. The Lakers first of eight games before the playoffs will take place on July 30 against the Clippers and will be televised on TNT at 6 p.m.

The first round of the playoffs will begin Aug. 17. Teams will be sequestered in their hotels and on the ESPN Wide World of Sports campus for as long as they play. The last possible day of the NBA Finals is Oct. 13.

When the season halted on March 11, because of concerns about the COVID-19 pandemic, the Lakers were leading the Western Conference, having recently defeated the Clippers and league-leading Milwaukee Bucks. The Lakers led the Western Conference with a record of 49-14, and had secured the organization’s first playoff berth since 2013. They have hopes of winning their first championship since 2010.

Bradley was a big part of their success this season. He started alongside James, Anthony Davis, Danny Green and JaVale McGee. His defensive intensity and skill helped the Lakers, and in March he was on a hot streak shooting three-pointers. During times when Bradley was injured, the Lakers relied on Kentavious Caldwell-Pope to fill his spot.

Once Bradley decided not to play, the team resumed previous conversations with Smith’s representatives.

Smith is represented by Klutch Sports Group, which also represents James, Davis, Caldwell-Pope, Talen Horton-Tucker and Dion Waiters. Smith originally worked out for the Lakers on March 2, the same day Waiters did, and the team opted to sign Waiters instead.

The Basketball Tournament, a single-elimination competition broadcast by ESPN, has grown in popularity since its founding in 2014.

Waiters has yet to play for the Lakers, who were easing him into their lineup. He was scheduled to join the South Bay Lakers, the team’s developmental affiliate, just before the season was interrupted.

Smith also performed well during his workout, which led the Lakers to keep him in mind. He started his career as a first-round pick by the New Orleans Hornets in 2004. He was the league’s Sixth Man of the Year while playing for the Knicks in the 2012-13 season.

The Knicks traded him to the Cavaliers in January of 2015. He was with James for four consecutive Finals appearances, including 2016 when the Cavaliers won the city’s first championship in more than 50 years.

During the 2018-19 season, the year James joined the Lakers, Smith only played in 11 games. Cleveland waived Smith last summer and he has not yet played for a team this season.