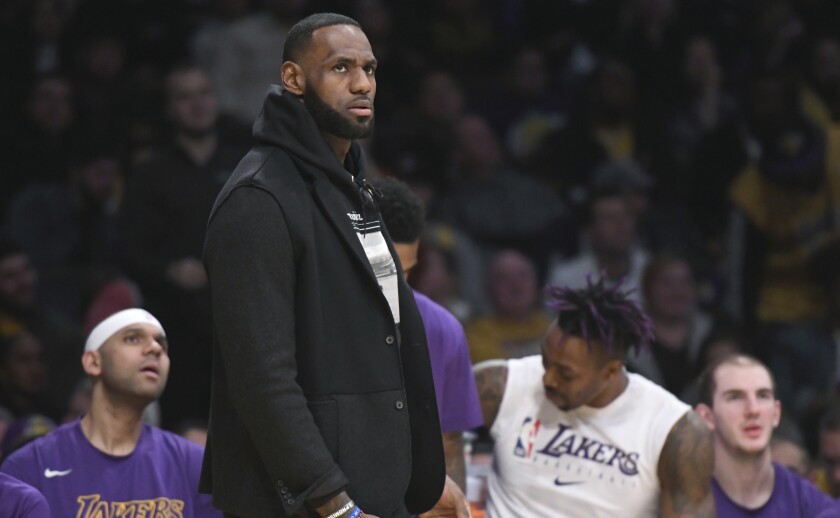 It wasn’t the kind of holiday news oddsmakers or sports bettors wanted to hear. When LeBron James was scratched from the Lakers’ lineup with a thoracic muscle strain before Sunday night’s game with Denver, it meant his status would be uncertain for the much-anticipated Christmas Day game against the Clippers (5 p.m., ABC).

The league scheduled it as a must-see part of a quintuple-header highlighting the co-favorites to win the Western Conference and league title.

Sportsbooks were hoping for heavy (and split) betting action, generating much more traffic than usual on Christmas. Nevada books in particular are a game-day destination for fans of either team. Stars such as James, Anthony Davis and Kawhi Leonard have a national and global following, so the thinking was Lakers-Clippers would drive interest in all legal jurisdictions.

Handicappers were hoping for a pure read on how oddsmakers and professional gamblers were power rating the two teams. You can’t get any cleaner than full strength on a neutral court. The opening line would tell observers which team oddsmakers thought was superior.

Now the market must wait for news on James’ status. Even if he’s cleared, an adjustment may be made because he’s not 100%. Foot traffic in sports books will be lighter.

Sunday’s five-point line adjustment from Lakers -7.5 to -2.5 after the scratch gives us a sense of James’ estimated market value. Observers can at least use that for guidance Wednesday if he’s the only high-impact player to miss the game.

— This week’s other big local betting attraction will be Friday’s Holiday Bowl featuring USC and Iowa (5 p.m., FS1). That point spread has held solid with Iowa as two-point favorites for several days. Many bowl lines will stay frozen until game days because of fears regarding player suspensions. The early bowls are off to a volatile start. Final victory margins in five of the first eight missed the point spread by more than two touchdowns.

— After a holiday break, the USC and UCLA basketball teams will play this weekend. The Bruins will be home favorites against Cal State Fullerton (2 p.m. Saturday, Pac-12 Networks). UCLA lost in Las Vegas last weekend to previously slumping North Carolina, 74-64. The Bruins fell to 7-5 straight up, 6-6 against the spread (ATS).

The Trojans will be coming off a 70-68 upset of LSU as two-point underdogs at Staples Center when they host Florida Gulf Coast (7 p.m. Sunday, Pac-12 Networks). USC is 10-2 straight up this season, 6-6 ATS. Eight of its 12 games have stayed below market over/unders.

— In the NFL, neither the Rams nor the Chargers have anything to play for in their season finales Sunday. Advance lines for Arizona Cardinals-Rams and Chargers-Kansas City Chiefs were near a touchdown for the hosts. Those could change dramatically through the week, depending on player availability and public disclosures of result priorities.

Despite failing to return to the playoffs as defending NFC champions, the Rams have been a good bet all season. Saturday’s three-point loss at San Francisco covered a spread of +6.5. It brought the Rams to 10-5 ATS, a 67% cash rate. The Chargers are on the other end of the investment spectrum. Their 24-17 loss to Oakland as 7.5-point favorites dropped them to 4-9-2 ATS, just 31%.

— In the NHL, the Ducks enter the holiday break 15-18-4 after losing three of four on an eastern swing. An upset of the New York Islanders was overshadowed by losses to Philadelphia, New Jersey and the New York Rangers. According to covers.com, bettors backing the Ducks every game are down about 5.5 units against the money line but only one unit on the puck line, which offers adjusted prices at plus or minus 1.5 goals.

Nearing the midway point of the season, the Ducks and Kings are long shots on Stanley Cup futures boards. A composite of global sports books shows the Ducks most commonly 80-1, the Kings 250-1.

Sign up for VSiN’s free daily email at VSiN.com/newsletter.