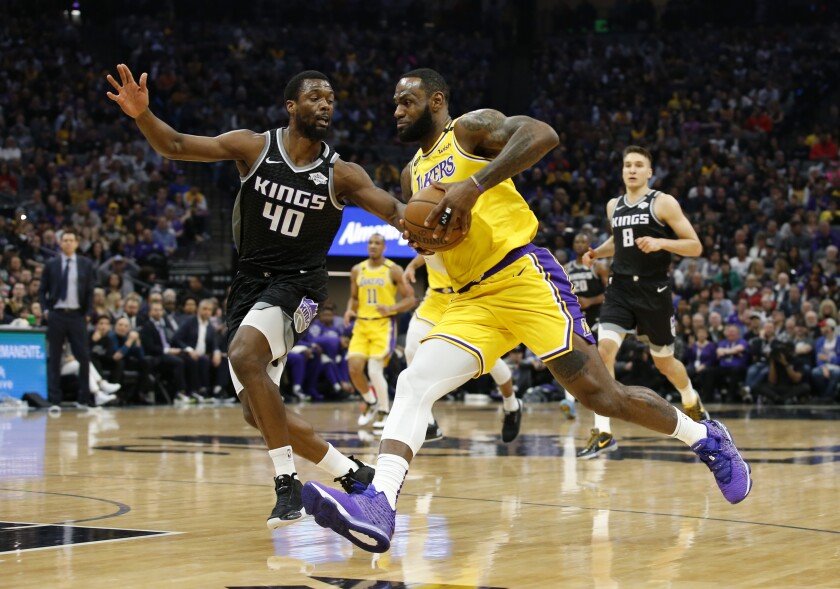 LeBron James, Lakers score 81 in first half in routing Kings as Kobe Bryant is honored

Five years ago, Kings Coach Luke Walton was an assistant for the Golden State Warriors, headed to the NBA Finals against the Cleveland Cavaliers. On a walk with his infant son, Lawson, he called an old teammate for some advice on what to do about LeBron James.

“Tell me anything you know about LeBron,” Walton told Kobe Bryant while pushing Lawson around in a stroller.

Thirty minutes later, Bryant was still talking, sharing tendencies he had noticed about the way James liked to play. Walton sat down outside his house as what he thought would be a quick chat turned into a detailed scouting session.

These types of stories are ones he thought about this week as Walton joined current and former players and coaches in mourning Bryant’s sudden death in a helicopter crash last Sunday. He had already spoken about his memories of Bryant, but with the Lakers in town came another round of reminiscing.

On Saturday, the Lakers played the Kings in Sacramento, a day after playing their first game since Sunday’s crash. The night before, their franchise had paid tribute to Bryant with a series of videos, musical performances and other symbolic gestures. On Saturday, the Lakers beat the Kings 129-113 to improve to 37-11. James notched a triple-double with 15 points, 11 assists and 10 rebounds.

For the second night in a row, they played in a game filled with tributes and memories.

Shortly after the conclusion of Friday night’s game, the Lakers boarded a flight for Sacramento. On Saturday, they went through their normal routine of a morning meeting in which they reviewed the previous night’s contest, a loss to the Portland Trail Blazers.

At Golden 1 Center in Sacramento, a temporary memorial to Bryant had been placed outside for fans to sign. Before the game, James went onto the court for some shooting with his shorts rolled up so the Black Mamba tattoo he got this week was visible.

Games between the Lakers and Kings typically include some trash talk from the arena’s game operations team. Usually, they show a video of a jammed freeway to mock the Lakers for the traffic in their city. On Saturday, though, that video wasn’t played. Several members of the Kings organization, including their public address announcer, Scott Moak, wore shirts that said KOBE on them. Moak told the fans pregame that this game wasn’t about a rivalry, it was about honoring a legend.

It started with a video during the first timeout that showed Bryant and his 13-year-old daughter, Gianna, who were two of nine people killed in the helicopter crash. The video took fans in the arena through Bryant’s whole career, ending with his final game in Sacramento — a city that disliked him throughout most of his career for his part in the franchise’s most disappointing moments.

At another stoppage in play, the video board showed Kings director or player personnel and development Peja Stojakovic, vice president of basketball operations Vlade Divac, Walton and DeAaron Fox, who spent time at the Mamba Academy in Thousand Oaks, discussing Bryant’s impact.

The next video featured Bryant’s top eight moments against the Kings — including two that knocked Sacramento out of the Western Conference finals.

“I’ve heard all the stories from both sides now, and there’s not a lot of love, but boy is there a lot of respect,” Walton said. “It’s Vlade and them, and their front office, this city, this organization has a lot of pride in their Kings, and it feel like very much a family. And they’re hurt. And they’re supportive, and they understand.”

In between the tributes, the Lakers played a spirited half of basketball, as they often do on the second night of back-to-backs. They have yet to lose in such situations. The Lakers made nearly 60% of their three-pointers in the first half, with Avery Bradley making four of the five he attempted in the first quarter.

The final three of the half came from Danny Green.

The score at halftime might have been mistaken for another tribute to Bryant, whose career high was an 81-point game in 2006.

The Lakers continued to dominate the Kings in the second half, and the planned tributes ceased after halftime. But the Lakers fans in the building made their voices heard. With 7:41 left in the game, a “Ko-be” chant broke out in the lower bowl. James promptly sank a three-pointer.

Walton has been in touch with several of his former Lakers teammates during the past week. He mentioned talking to Jordan Farmar, Lamar Odom and Adam Morrison. As they remember Bryant, their conversations often turn to the downtime they shared with Bryant.

Like the time when he and some teammates tried to teach Bryant “quarters,” a drinking game that involves bouncing quarters into cups.

“He was awful at it,” Walton said.

In typical Bryant fashion, though, he refused to accept being bad at even a drinking game. As Walton and his teammates continued to hang out, Bryant was by himself practicing at quarters.

Said Walton: “You start to feel a little better when you find yourself laughing and enjoying the memories.”