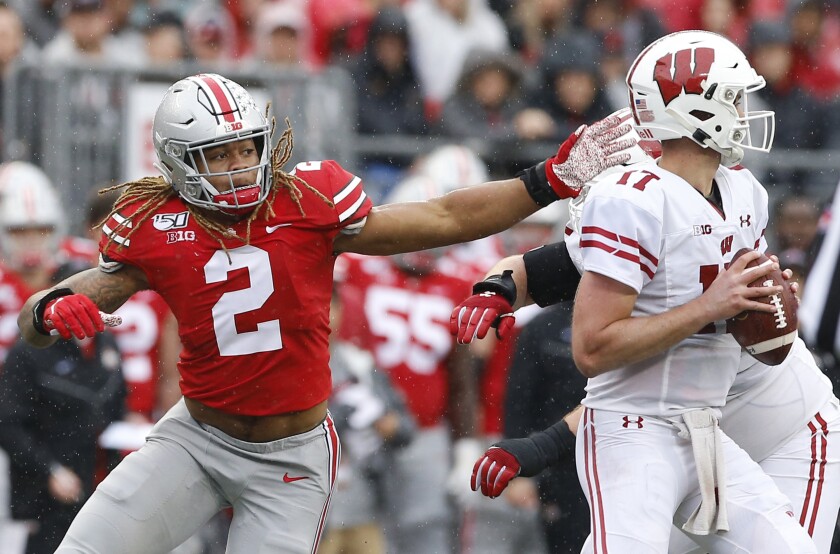 LeBron James’ role as a social media influencer in the 2019 Heisman Trophy vote has been duly noted.

Early in the fourth quarter of No. 3 Ohio State’s 38-7 thrashing of visiting No. 13 Wisconsin on Saturday, the Lakers star and Ohio native posted a tweet of amazement directed at Buckeyes junior defensive end Chase Young not long after he completed the second of back-to-back, second-half strip sacks to change the momentum of the contest:

A couple emojis for emphasis resulted in Fox posting the tweet as a screen graphic, after play-by-play man Gus Johnson already announced he has an official Heisman vote and Young is “the best player … in America ... period!”

With four sacks for a loss of 25 yards, six solo tackles and the two forced fumbles, Young wasn’t the only one wearing No. 2 to wreak havoc for the Buckeyes (8-0, 5-0) against the Badgers (6-2, 3-2), a week after Wisconsin tumbled seven spots in the Associated Press poll because of a one-point loss at Illinois.

Tailback J.K. Dobbins piled up 163 yards and two touchdowns to rain on any parade that another Heisman candidate, Wisconsin junior running back Jonathan Taylor, could have tried to generate. Taylor managed just 52 yards on 20 carries for a 2.6-yard average. Dobbins blew past the 1,000-yard rushing mark on the season, the first Buckeyes player to eclipse that threshold as a freshman, sophomore and junior. (Two-time Heisman winner Archie Griffin did it as a sophomore, junior and senior from 1973 to ’75.)

Ohio State went scoreless in the first quarter for the first time this season and led just 10-0 at halftime. Then the rain let up.

“In all honesty we could have put up 50,” said Ohio State quarterback Justin Fields, who threw two touchdown passes to Chris Olave and ran for another. “I think if the weather was different, I think we could have [thrown] the ball more and put up way more points than we did.”

“Going into the season, you want to break every record, and I feel like right now I can’t really worry about the sack record,” Young said. “I’ve got to keep on perfecting my craft.”

Urban Meyer, the Fox Sports studio analyst who retired after seven seasons as the Ohio State coach following the Rose Bowl in January, was dispatched to The Horseshoe for Saturday’s show and ended up with his arm around the shoulder of Young’s mother, Carla, on camera at the end of the game. He confirmed an earlier statement that her 6-foot-5, 265-pound son “is definitely a Heisman candidate ... the best player maybe in college football to this point … he completely dominated.”

Just in case James someday wants to tackle that idea with all that college eligibility he still has.

As Ohio State, Alabama and LSU coast into a Week 10 open date, which one of them might come out No. 1 when the College Football Playoff committee casts its first official vote to be made public on Nov. 5?

It sort of makes a difference.

If Alabama and LSU grab Nos. 1 and 2 in whatever order, that makes their Nov. 9 matchup in Tuscaloosa, Ala., even more intriguing.

If Ohio State noses its way into either one of those high-rent spots, with four games left on a conference schedule that still has No. 6 Penn State and No. 19 Michigan, it easily could dilute the way CBS is able to promote a Tide-Tigers SEC matchup that it has decided to keep in the 12:30 p.m. TV window instead of moving it to prime time.

And then there’s AP preseason No. 1 Clemson, which has continued inching its way down despite remaining unbeaten and is the only one in the top four playing in Week 10, able to make a statement by tearing into …wily Wofford?

Then there’s a question of the appropriate recognition for Appalachian State.

The Sun Belt Conference’s 7-0 Mountaineers, given the AP No. 21 slot prior to their 30-3 runaway at South Alabama on Saturday, remain one of nine undefeated FBS schools after Oklahoma fell off the list.

Where the CFP voters put App State matters because of new conditions that award a major bowl berth to the highest-ranked school among the Group of 5 conferences — that’s the American, Conference USA, Mid-American, Mountain West and Sun Belt. The school from the tiny town of Boone, N.C., would need to push itself past No. 16 SMU and/or No. 18 Cincinnati as well as keep No. 22 Boise State at bay.

Appalachian State, riding a 13-game win streak, hasn’t played any Top 25 teams, and none are on the rest of the conference schedule that has Georgia Southern, South Carolina, Georgia State, Texas State and Troy lined up for a possible 12-0 finish. Its most impressive win came in Week 4 at North Carolina (34-31 on a blocked field goal).

One play prior to quarterback Joe Burrow scoring to create a 10-point, fourth-quarter lead for No. 2 LSU en route to a 23-20 win against No. 9 Auburn, CBS’ cameras caught Auburn defensive end Big Kat Bryant being helped to the sideline.

“We’re not allowed to speculate here,” broadcaster Gary Danielson said as a replay showed the prior play in which Bryant was stood up by LSU offensive lineman Austin Deculus. “But watch how he goes across the field … he’s fine … he’s not limping.”

As the play ends, Bryant looks to the Auburn bench. Then he falls to the ground. Deculus can’t believe it, and gestures toward the referee.

In the next shot Bryant is having his lower back massaged on the Auburn bench, and play-by-play man Brad Nessler starts to giggle.

“If he came up limping, he must have sprained it when he went down,” Danielson summarized.

*Nebraska had to use third-string quarterback and true freshman Luke McCaffrey, the brother of former Stanford and NFL star Christian McCaffrey, and his 24-yard touchdown pass to Kanawai Noa put the Cornhuskers up 21-16 at halftime.

*Oklahoma cornerback Parnell Motley was ejected early in the second quarter of the No. 5 Sooners’ 48-41 loss at Kansas State when he kicked tight end Logan Long along the Sooners’ sideline right in front of an official.