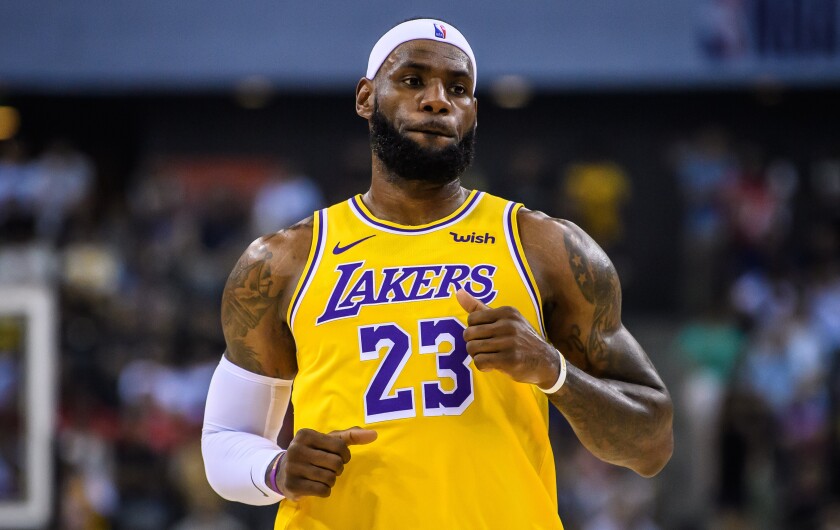 Lakers star LeBron James believes Houston Rockets general manager Daryl Morey was misinformed on what the reaction would be to the since-deleted tweet he sent in support of protesters in Hong Kong.

“I’m just talking about the tweet itself,” James said to the media Monday. “You never know the ramifications that can happen. And we all seen what that did. Not only did for our league, but for all of us in America, for people in China as well. And sometimes you have to think through things that you say that may cause harm not only for yourself but for the majority of the people. I think that’s just a fine example.”

James spoke at Staples Center before the first of the Lakers’ two home exhibitions this season, both against the Golden State Warriors. It was the first time he had spoken to reporters since before leaving the United States to play two exhibitions in China.

Shortly after making his statement, James took to Twitter to offer a clarification.

Let me clear up the confusion. I do not believe there was any consideration for the consequences and ramifications of the tweet. I’m not discussing the substance. Others can talk About that.

My team and this league just went through a difficult week. I think people need to understand what a tweet or statement can do to others. And I believe nobody stopped and considered what would happen. Could have waited a week to send it.

The week did not go as planned for the NBA. Chinese media, which is controlled by the government, expressed anger about Morey’s tweet, and plans for the Lakers and Brooklyn Nets were altered. Team functions were canceled. Players’ individual sponsor-related events were canceled. There was some doubt the teams’ games would even be played.

“I don’t want to get into a [verbal] feud with Daryl Morey, but I believe he wasn’t educated on the situation at hand and he spoke,” James said. “And so many people could have been harmed not only financially, physically, emotionally, spiritually. So just be careful what we tweet and say and we do, even though, yes, we do have freedom of speech, but there can be a lot of negative that comes with that too.

“That’s my belief. That’s all I can say. I believe he was either misinformed or not really educated on the situation, and if he was, then so be it.”

James said he and his teammates did not believe they were well versed enough on the protests in Hong Kong to comment on the situation. He added that they still feel that way.

Pro-democracy protesters have been demonstrating against the Chinese government in semi-autonomous Hong Kong since June.

James’ initial comments drew the ire of many on social media.

Among them was U.S. Sen. Rick Scott (R-Fla.), who posted on Twitter: “Clearly @KingJames is the one who isn’t educated on the situation at hand. It’s sad to see him join the chorus kowtowing to Communist China & putting profits over human rights for #HongKong. I was there 2 weeks ago. They’re fighting for freedom & the autonomy they were promised.”