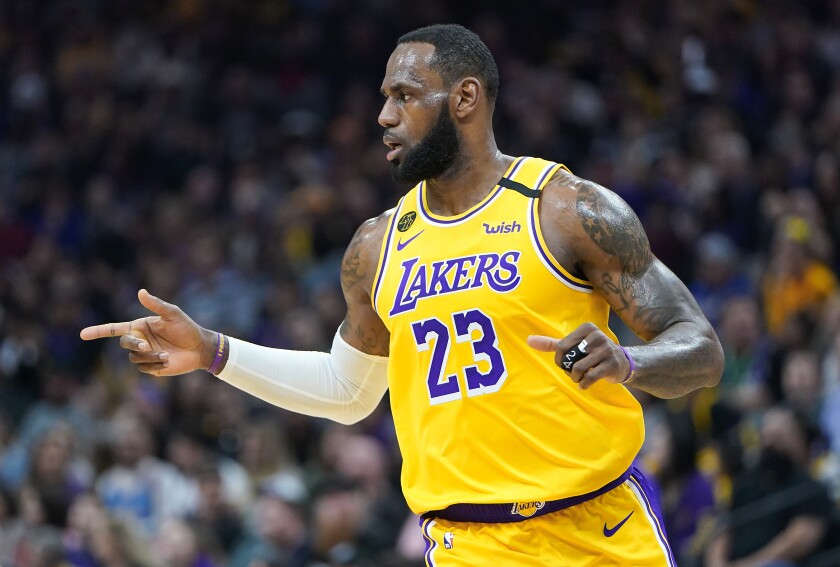 LeBron James on Tuesday was named Western Confernece player of the month for January, becoming the first Laker to win the award since Kobe Bryant in February 2013.

James averaged 25.4 points on 50.4% shooting, 8.1 rebounds, 10.4 assists and 1.4 steals in January. He had 14 double-digit scoring performances, 10 games with 20 or more points and five games with at least 30 points. On Jan. 25, James scored 29 points and passed Bryant to take over third place on the league’s all-time scoring list.

Bryant called James a few hours later and the two had a conversation that James said he has thought about every day since.

Less than 12 hours after they spoke, Bryant, his daughter and seven others died in a helicopter crash in Calabasas.

What James did in the following week was even more valuable for the Lakers than what he did on the court. In a meeting last Tuesday, James stood in front of the team’s traveling party to share stories about Bryant and pledged to help carry them through their grief.

The Lakers played their first game since Bryant’s death on Friday. James gave another speech before that game. But he pocketed his prepared remarks and instead told the Staples Center crowd he wanted to speak from the heart.

In recent years, James and Bryant had developed a closer relationship than they had during Bryant’s playing career.

“Kobe’s a brother to me,” James told the fans before Friday’s game. “From the time I was in high school, watching him from afar to getting in this league at 18, watching him up close. All the battles we had throughout my career. The one thing that we always shared was that determination to just always want to win and just want to be great.

“The fact that I’m here now means so much to me. I want to continue along with my teammates, to continue his legacy, not only for this year, but for as long as we can play the game of basketball that we love because that’s what Kobe Bryant would want.”