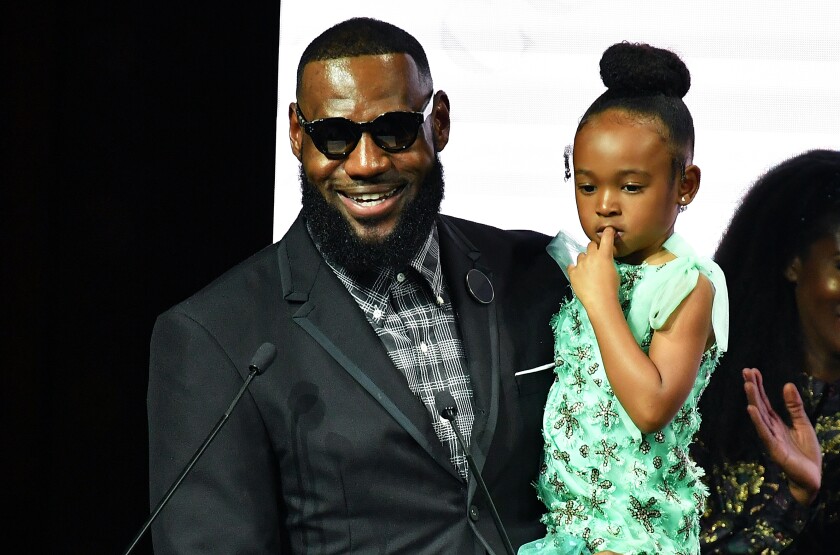 When the NBA decided to honor Kobe Bryant’s memory in the All-Star game Feb. 16 in Chicago, part of its plan was to have one team’s players wear No. 2, which Gianna Bryant wore on her youth team, and the other team’s players don No. 24, Kobe Bryant’s number in the latter part of his career.

The league asked the Lakers’ LeBron James, who was voted an All-Star team captain along with the Milwaukee Bucks’ Giannis Antetokounmpo, which number he would like his squad to wear, and he picked No. 2.

James explained why Monday with one word.

James wore a bracelet on his right wrist made of small purple beads, broken up by three cube-shaped beads, white with the numbers 8 and 24 on them. He spoke about the balance the Lakers are attempting to strike between doing their jobs and leaning on each other to help process grief and remember Kobe Bryant.

A few feet away was a decal that had been installed Friday afternoon on the corner of one of the Lakers’ practice courts — a filled-in black circle with “KB” written inside. Near the middle of the court were the decals with the numbers 8 and 24, just like on the Lakers’ game-day court at Staples Center.

It had been eight days since Bryant and his 13-year-old daughter, Gianna, were among nine people killed in a helicopter crash in Calabasas.

“Today was the start of a new week,” James said. “We got a great workout, great practice today. We continue to focus on what needs to be done to continue to win ballgames and get better and be as great as we can be. So it was a good day for us today.”

This week is important in the NBA with the trade deadline at noon PST on Thursday. Before the tragic crash Jan. 26, the Lakers had been gently exploring their options. With the best record in the Western Conference, they weren’t trying to make any dramatic changes but were open to trading anyone on the roster besides James or Anthony Davis.

During the last week, the Lakers experienced something together that no one outside their locker room could understand. Their bond, already strong, grew tighter through the mourning experience.

It’s something the Lakers’ front office will consider as the trade deadline approaches but not something that will paralyze it.

“I think it is part of the equation, but I don’t think it’s going to be something that prevents us from doing something if there’s an opportunity to improve our roster,” coach Frank Vogel said.

The tragedy Jan. 26 was particularly difficult for general manager Rob Pelinka, who considered Bryant his best friend and was the godfather to Gianna Bryant. But there has been a desire throughout the organization to honor Bryant by adopting his mentality — and that meant doing whatever it took to be successful on the court.

Pelinka attended practice Monday, as he has every day since the Lakers resumed practices last week.

“I just think that to compete at the level of professional sports, or really any sports, your mind has to be focused on what you’re doing,” Vogel said, speaking generally about the healing power of work. “Invariably it takes your mind off your pain of everything you’re going through.”

In practice Monday, Vogel focused on defensive principles he believed the team had been ignoring lately. The Lakers also worked on offensive tactics as they tried to predict how teams would attack them in coming games. They will host the San Antonio Spurs on Tuesday night in a game that won’t include the same tributes and memorials that were part of Friday night’s game against the Portland Trail Blazers at Staples Center.

But the Lakers still will honor Bryant. They still will break each huddle by saying, “1, 2, 3 Mamba!” as they have been doing since a practice last week.

“There is no way any individual can do it on their own,” James said. “The week that we had, the week that we’ve all had, you have to lean on somebody in order to gain strength. That’s the only reason we’re all able to get through it together.”

Up next for the Lakers: Tuesday vs. San Antonio Spurs

Update: The Spurs will be playing on the second night of a back-to-back situation, having faced the Clippers on Monday night. They entered their game against the Clippers on a two-game winning streak but have struggled on the road, where their record was 8-14 entering Monday.