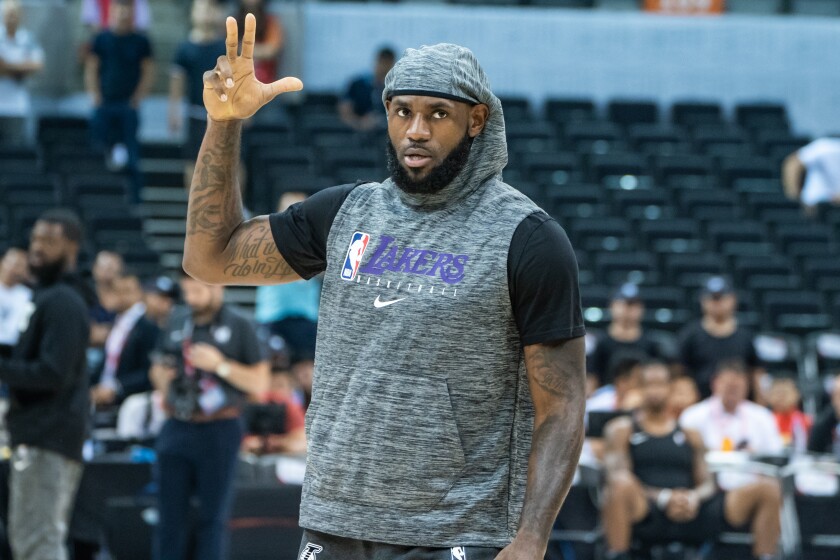 Lakers star LeBron James received more backlash Tuesday for saying the previous day that freedom of speech can lead to “a lot of negative.”

He was unaware after practice Tuesday that protesters in Hong Kong had burned his jersey and were upset because James was critical about Houston Rockets general manager Daryl Morey’s since-deleted tweet supporting demonstrators in Hong Kong.

James spoke about Morey’s tweet Monday night before the Lakers played Golden State at Staples Center and again after practice Tuesday, including the controversy now surrounding his comments.

“It’s a tough situation we’re all in right now with the association (NBA), us as athletes, GMs (general managers) and owners and so forth,” James said. “I think when the issue comes up and you feel passionate about it and you feel like it’s something you want to talk about, then so be it.

“I also don’t think every issue should be everybody’s problem as well. When things come up, there’s multiple things that we haven’t talked about that have happened in our own country that we don’t bring up. There’s things that happen in my own community in trying to help my kids graduate high school and go off to college. That’s been my main concern the last couple of years with my school.

“Trying to make sure the inner-city kids that grow up in my hometown of [Akron, Ohio] can have a brighter future and look at me as an inspiration to get out of the ‘hell hole’ of the inner city. We don’t talk about those stories enough. We want to talk about so many other things as well. There’s issues all over the world. I think the best thing we can do is if you feel passionate about it, talk about it. If you don’t have a lot of knowledge about it or quite understand it, I don’t think you should talk about it because it puts you in a tough position.”

James said he didn’t “have a reaction” to what was happening in Hong Kong.

“No, I had a sense of what I said felt for me,” James said Tuesday. “And like I said yesterday, when I speak upon things, I speak from a very logical standpoint on things that hit home for me. Yesterday, obviously I gave thoughts on what I felt and how I saw things that transpired from that week that we were gone.”

The NBA’s relationship with China became strained following Morey’s tweet. The Lakers were in China last week to play two games against the Brooklyn Nets, in Shanghai and Shenzhen, during a political maelstrom that remains a thorny issue for the league.

“I think the best thing we can do is continue to play the game of basketball, and I believe the game of basketball and the word ‘sport’ has always brought people together for the great of love and not the great of hate,” James said. “And I think this is the greatest sport in the world. And obviously it is a small bump in the road, but I think time heals all and for all of us as Lakers and as an organization and the NBA, we want to continue to play this game that has brought so many people together over the last, I don’t how long this game has been since Dr. James Naismith created it.”

Anthony Davis, who missed Monday night’s game against the Warriors because of a sprained right thumb, practiced Tuesday and said the “plan” is for him to play Wednesday night against the Warriors at Staples Center if “there are no hiccups” after he wakes Wednesday. … Kyle Kuzma has been cleared for noncontact practice as he recovers from a stress reaction injury in his left foot. … The Lakers signed guard Reggie Hearn and waived guard David Stockton. The Lakers now have 20 players on their roster, including two players under two-way contracts.