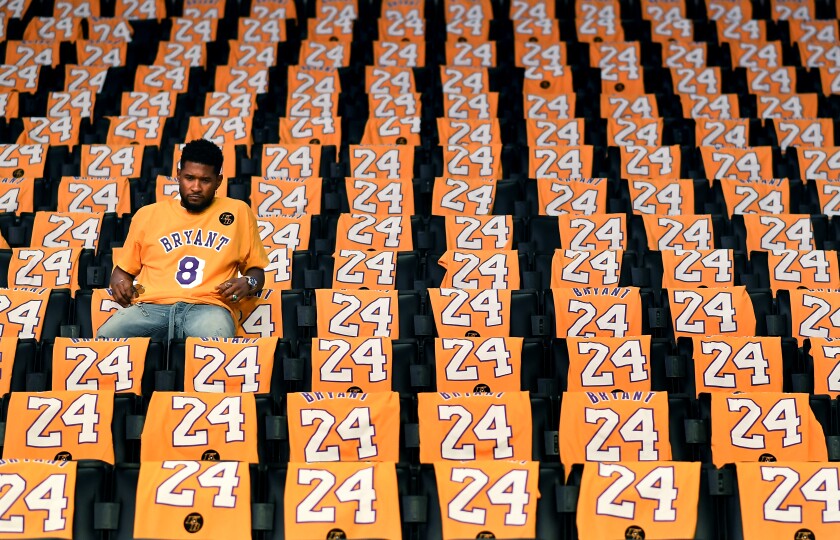 The Lakers covered the two seats that Kobe and his daughter, Gianna, occupied the last time they came to Staples Center, when the Lakers played the Dallas Mavericks on Dec. 29, with Kobe’s No. 24 jersey and Gianna’s No. 2. They covered the seats with bouquets of red roses.

The names of the nine victims of the helicopter crash are scrolling around the digital banner that envelopes the arena.

The names of the nine victims of the helicopter crash are scrolling around the digital banner at Staples. pic.twitter.com/tAlN1L7dr5

Hours before the Lakers play their first game since Bryant’s death against the Portland Trail Blazers on Friday night, James revealed on his Instagram account a new tattoo honoring Bryant, whom James passed for third place on the NBA’s all-time scoring list Saturday night.

James also posted a picture of him and Bryant sitting on the bench together as Olympians.

The Lakers tweeted a photo of Bryant’s No. 24 jersey hanging on a wall to the side of James’ locker as he prepared for Friday’s game. James uses the same corner locker space that Bryant used during his time as a player.

Two hours before Friday’s 7:30 p.m. tipoff for the Lakers’ first game since Kobe Bryant’s death against the Portland Trail Blazers, tickets on the secondary market were going for a minimum of $922 each on StubHub.com.

At the top of the spectrum, two courtside seats were listed at $13,200 each.

StubHub said it will “honor the legacy of the great Kobe Bryant and his daughter, Gigi,” by donating 100 percent of the fees of tickets sold to Friday’s game to the Kobe & Vanessa Bryant Family Foundation.

Lakers great Magic Johnson is in the building for the team’s first game since Kobe Bryant’s death on Sunday.

The mask features a silhouette of Bryant and his daughter, Gianna, and the names of the seven other victims of Sunday morning’s helicopter crash.

The helmet portrays a purple-and-gold No. 24 on one side and a No. 8 on the other.