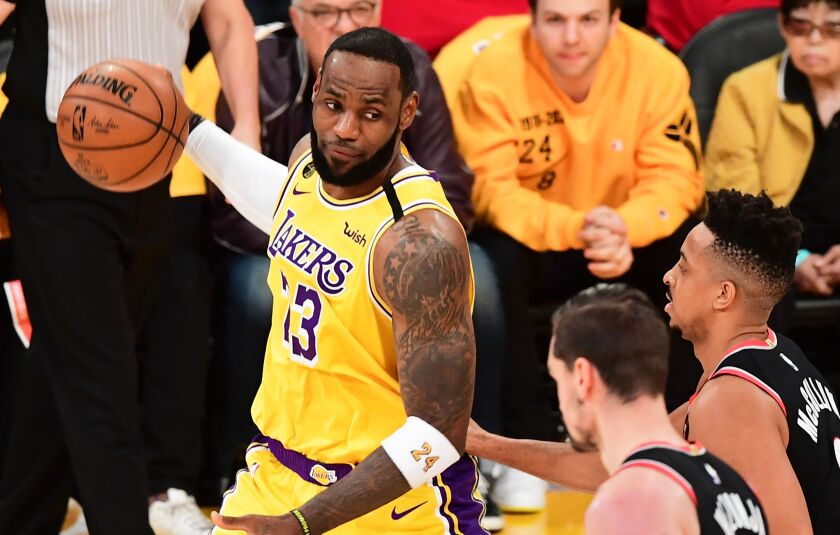 JaVale McGee isn’t the only person in his family who’s won a professional basketball championship — his mother, Pamela McGee, has too. But he’s missing something his she has: an Olympic gold medal.

His thoughts turned to that Monday when USA Basketball announced the 44 finalists for its men’s Olympic team. Five of the people on the list were Lakers — LeBron James, Anthony Davis, Kyle Kuzma, McGee and Dwight Howard.

“It’s always predicated on: one, my body, how my body is feeling at the end of the season — I hope to make a long playoff run,” James said. “And then where my mind is and then where my family’s head is. So it’s a lot of factors, but my name is in the hat.”

James skipped the 2016 Olympics, citing rest at the time. Training camp would have started not long after his Cavaliers won an NBA championship in a seven-game series against the Golden State Warriors.

Davis also missed the 2016 Olympics, having just had knee surgery.

He was part of the 2012 team as a 19-year-old straight out of college at Kentucky. He grew close with the veterans on that team, especially Kobe Bryant and James.

“I think I wouldn’t be the player I am today if it wasn’t for those guys,” Davis said of his Olympic teammates. “Kob, LeBron, Melo [Carmelo Anthony], Tyson [Chandler], CP [Chris Paul], Russ [Russell Westbrook], James [Harden], it was all my guys, I was their guy, their rookie. And it just helped me become a professional early in my career, showing me how to work, how to work hard, and I kind of carried that through my career.”

In addition to James and Davis, Howard is also an Olympic gold medalist, having won with the 2008 team in Beijing.

The last time Howard was part of the team, they were one Olympics removed from a disappointing bronze medal finish. This summer, the team is also trying to improve upon a down year — but one more recent. The USA men’s basketball team, which lacked the league’s top stars, finished seventh in the FIBA World Cup last summer.

Kuzma received an invitation to training camp for that team. He likely would have made the final roster if not for a stress reaction in his left ankle that also caused him to miss the first four games of the season.

He and McGee would be Olympic newcomers if they made the final roster.

“Younger in my career, I didn’t really understand the importance of the Olympic invite, and I didn’t understand the role you have to play when you go to situations like that,” said McGee, who is in his 12th NBA season. “Because I’ve been invited before, but it was more when I was out there, I was more ‘I want to do this, I want to do that!’ When it really doesn’t matter if you score, it doesn’t matter if you do this or that, they just want you to play a role. As you mature, you learn more.”