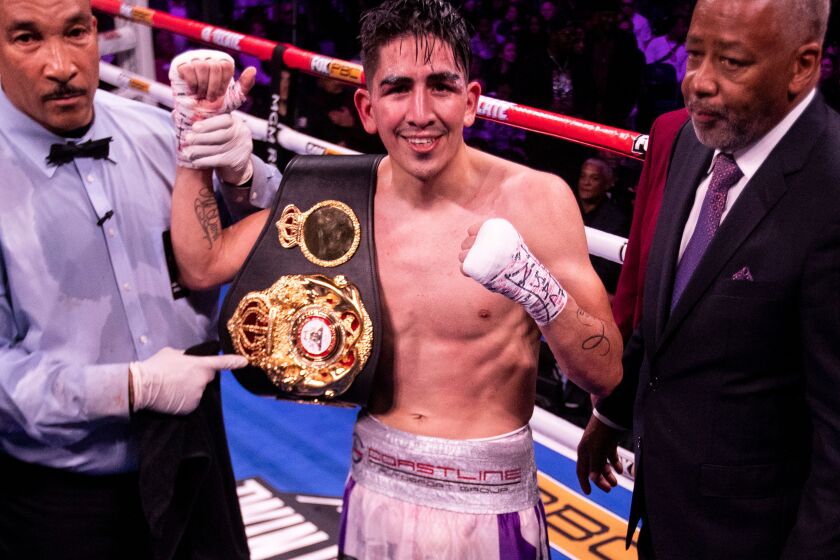 The knock on boxing’s little guys is that they don’t have the bone-crushing knockout power the big boys do.

Leo Santa Cruz was pegged to serve as an appetizer for the heavyweight championship showdown and main course between Deontay Wilder and Luis Ortiz on Saturday at the MGM Grand, and although he was moving up in weight, restless fans couldn’t wait for his fight to be over.

Santa Cruz (37-1-1, 19 KOs) stepped up to the 130-pound weight class and won a world title in a fourth division via unanimous decision when he outworked Miguel Flores (24-3, 12 KOs) for a vacant version of the WBA junior lightweight title.

Santa Cruz won by the scores of 117-110 twice and 115-112. The tally amounted to Santa Cruz becoming the fifth Mexican fighter to win championships across four weight divisions, joining the recently anointed Canelo Alvarez, Erik Morales, Juan Manuel Marquez and Jorge Arce. Santa Cruz, from Los Angeles, also was a crownholder at the 118, 122 and 126-pound divisions.

In his immediate post-fight interview, the heavy favorite Santa Cruz said he wasn’t pleased with his performance either, but noted that he didn’t want to make any excuses.

“Winning this title means the world to me,” Santa Cruz said. “This is all for the fans who support me. I didn’t feel myself today and didn’t perform the way I wanted to. I’m going to get back in the gym and get a big fight in 2020.”

Even though Santa Cruz made personal history, the showdown was a dull display. In fact, the most scintillating moment was when Mike Tyson entered the arena and made his way to his seat. The impatient crowd momentarily held back the boos and embraced the heavyweight icon.

Santa Cruz, who is famous for relentlessly swinging his way through rounds of more than 100 punches, was more subdued, mounting points on the scorecards, much to the disdain of the crowd. He totaled 907 punches thrown, a rate of 75 per round. He landed only 28%.

“It was a close fight and I didn’t think he was landing too much,” Santa Cruz said. “He was busy but he wasn’t landing too many shots. I landed cleaner, harder shots but he was just busier.”

The first two rounds were feel-out ones for Santa Cruz, who didn’t display the traditionally high output of punches fans have been accustomed to. Flores split the first two stanzas, outboxing his adversary at times.

In the third round, a recommitted Santa Cruz stepped off his stool and applied the pressure, walking down Flores and clipping him with a straight right hand. He followed up the crisp punch with a workmanlike approach to the body.

The somewhat slow pace continued for the rest of the fight. In the eighth round, referee Tony Weeks had seen enough holding from Flores and deducted a point.

Flores was game and even stole a few rounds, but not quite enough to win.

“It was a good fight and I showed I belong at this level,” Flores said. “I just went 12 rounds with Leo Santa Cruz. It’s not an accomplishment in itself but I slowed down his pace. Like I said before, it’s not only about throwing punches, but it’s about ring IQ and I showed I have it.”

Santa Cruz was cornered by father Jose Santa Cruz, who has been battling myeloma spinal cancer for the last three years. The senior Santa Cruz was getting around the MGM Grand with an electric scooter all week, but Saturday he was in full work mode. Earlier in the evening, he cornered undefeated Ukranian Viktor Slavinskyi to a unanimous-decision victory over Rigoberto Hermosillo.

“I think I did win the fight. He put on a lot of pressure, but I fought better in the early rounds and I finished strong,” Figueroa said. “I feel like he won maybe four rounds out of the whole fight. I thought I won the first four and closed out the last few rounds of the fight strong.”

“This fight is for all of you fans who came here to see me,” Ceja said. “He was a man about it and he gave me the fight. I think I won, but I respect the judges’ decision. I’ll definitely run it back in a rematch.”

“The first fight wasn’t a draw,” Ramirez said. ”I worked very hard for this and it turned out how I wanted today. I felt his punching power. He’s a good fighter but I came here to fight.”